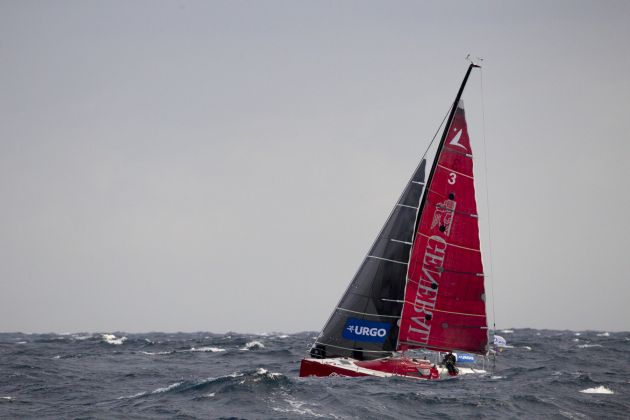 Adrien Hardy (Agir Recouvrement) seized the lead of the first stage of La Solitaire URGO Le Figaro during a very difficult second night at sea. While the remarkable bounce back of pre-race favourite Charlie Dalin (Skipper MACIF 2015) continues, clawing back nine places though an infernal night during which the passage of a front hit the fleet with gusts over 40kts, three times winner Jérémie Beyou (Charal) is racing towards the finish in Gijon under only mainsail in 23rd place 11 miles behind the leaders.

The Bay of Biscay fully lived up to its fearsome reputation on the second night of the 430 nautical miles first stage from Bordeaux to Gijon on the Spanish north coast. When Yann Eliès (Quéguiner-Leucemie Espoir) lead the fleet around the Plateau Rochebonne buoy, just 30 miles to the south west of Les Sables d'Olonne, at around 1900hrs on Monday evening conditions were still manageable with 20-25kts from the SW.

Race Director Francis Le Goff, reporting from on board the safety boat Etoile, explained. “After they started sailing on port tack (after the mark) out to the west the front came with the big shift and it was really violent, averaging 40kts and gusting to 50kts with all of the seas you'd expect with that.”

The soloists had to make their tack through the front on to starboard tack in big, unruly, confused seas and then reach SW towards Gijon. After more than 36 hours of racing, the effects of sleep deprivation and the physical effort really taking effect, it was one of the most challenging nights of recent editions of La Solitaire.

After breaking a spreader on his Armor Lux, Erwan Tabarly, third overall last year, arrived at the Sables d'Olonne during the night. Around midnight Damien Guillou (Domino's Pizza) and Anthony Marchand (Ovimpex-Secours Populaire) told Race Direction they had torn mainsails and they were heading towards the Vendée port. Yannig Livory (lorientprendre) is heading to Gijon under solent headsail alone while Beyou (Charal) lost his solent and is racing under mainsail alone.

While racing in around 30kts this morning, safety is still a primary concern. With just over 125 nautical miles to the finish line Hardy, 2013 winner of the Generali Solo, leads by nearly two miles ahead of Nicolas Lunven (Generali) and Sébastien Simon (Bretagne-CMB Performance). Yann Eliès lies seventh with a deficit of 3.5 nautical miles.

Breezes are expected to drop progressively through the morning with the winners expected into Gijon later this evening.