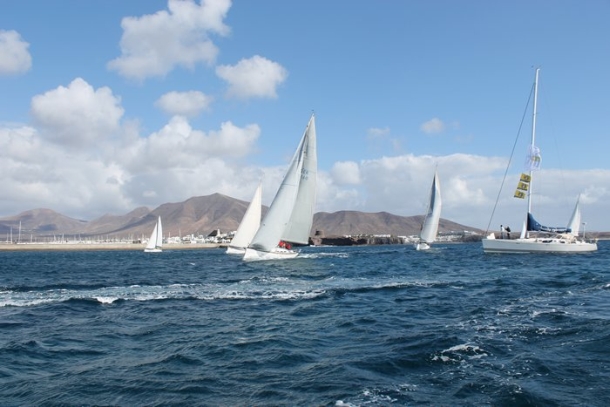 A successful end to the second Christmas Caribbean Rally (CCR 2014) sees elated crews and their shore support teams enjoying Antigua to the full. Eight boats and almost 50 crew safely completed the 2850nm crossing from Marina Rubicon in Lanzarote to arrive in the historic Caribbean sailing capital of Nelson’s Dockyard in Antigua.

Although not a race, it is fair to say there was an element of friendly competition between GB flagged ‘Raven’ a First 45, and German boat ‘Doppelbock’ Dufour 45. The two boats were fighting it out on the start line and for the first 12 hours of the crossing were within shouting distance of each other. Doppelbock made the decision to stick to the great circle route as closely as possible, whilst Raven took a dive south to reach the trades. It was neck and neck the whole way with as little as 2 miles difference at times, even throughout a 48 period of unusual light winds. It was only during the last 450 miles when Raven had a spinnaker issue that Doppelbock finally inched into the lead to a convincing win, finishing 10 hours ahead of Raven, making an elapsed time of 16 days 18 hours and 33 minutes.

The closest finish in the fleet has to be between Duplicat, a Privilege 435 and Bianca Rosa, Southerly 47, who crossed the finish line less than an hour apart; an astonishing feat after nearly 3,000 miles of ocean sailing. All other crews that had already arrived were on the dock to meet them and gave a fantastic reception, aided by welcome pack from the Antigua & Barbuda Tourism Authority, rum punch and a bottle of English Harbour 5 year old rum provided by English Harbour Rum.

A true family affair, there were seven boats in the fleet that had a father & son team on board. Bianca Rosa were one of these as skipper Matthew Harrison sailed with his father, mother and brother-in-law. Matthew’s sister Alex flew to Lanzarote and then to Antigua to support her family taking part in the event. Not wanting to be left behind again, Alex is planning on joining Matthew for the return trip on the Antigua 2 Falmouth event, run by Sailing Rallies which starts from Antigua on 8th May.

Activities for the fleet in Nelson’s Dockyard included a visit to the infamous Shirley Heights, with transport provided by the Antigua & Barbuda Tourism Authority, a delicious meal at the Copper & Lumber’s Seafood Friday, dinghy sailing at the National Sailing Academy, a visit to the charming Carib Coffee Co to see how coffee is roasted on the island, and a prizegiving at Admiral’s Inn Boom restaurant with prizes kindly sponsored by Topsail Insurance. Huge praise has been given to the start hosts, Marina Rubicon with Nelson’s Dockyard unanimously voted a fantastic place to arrive after a transatlantic.

The rally experience was in its truest form with a superb camaraderie between crews that built throughout the event. Dutch flagged Beneteau First 42s7 ‘French Kiss’ won a prize donated by marine artist Heinke Boehnert, for truly capturing the spirit of the CCR. Skipper Hans Wenkenbach commented “We must give a round of thanks, firstly to the CCR team for the excellent organization and support; the other participants for the great atmosphere on the docks; Bert of the Scheveningen Radiometeorological Services; Marina Rubicon for the great hospitality before the start, and last but not least all our friends, family and colleagues who have been following this project and our progress”.

In 2015 the CCR starts on 6th December, allowing crews to arrive in Nelson’s Dockyard in time for Christmas. Next year also sees the CCR going ‘multihull friendly’ for 2015. As well as an outstandingly well organised event, multihulls will now enjoy reduced costs as their mooring and entry fees are brought down in line with fees for monohulls. Multihulls will now be charged the same as monohulls for both the event entry fee and berthing in Marina Rubicon in Lanzarote, for up to 3 months in advance of the start. This represents a substantial saving for multihull owners for their Atlantic adventure.  Entries made before 28th February receive a further 10% earlybird discount off the entry fee. The Sailing Rallies team will be exhibiting at Boot Dusseldorf 17th-26th January and for anyone interested in finding out more, the Transatlantic Forum takes place on 28th & 29th March