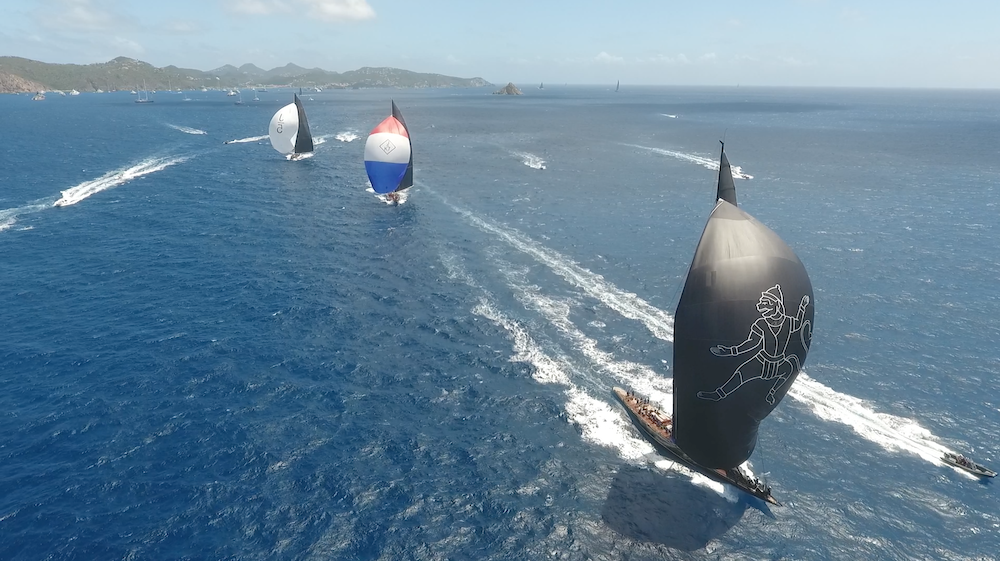 Racing downwind on the opening day

Racing in perfect 16-22 knot trade winds, the J Class teams enjoyed a sharp reminder of how tough and physically close fleet racing is aboard these historic, beautiful yachts after a two-year layoff.

While it was a massively enjoyable day of close competition in St Barth’s, as Hanuman, Ranger and Velsheda opened the popular Saint Barth’s Bucket regatta with two windward leeward contests, none of the crews escaped unscathed. All suffered some kind of misadventure or breakdown.

Most unfortunate was Ranger, competitive off the bat throughout the course of the crew’s first race together and the new owner’s first every proper yacht race. However, it suffered a mechanical failure to a primary winch which required them to retire after starting the second race.

Both Velsheda and Hanuman had their own respective sail handling issues too, commensurate with a first race of the season in robust trade winds.

Hanuman started best on the first windward leeward contest. It got off the line smartly at the pin end, with tactician Kenny Read, helm Gavin Brady and navigator Stan Honey combining to ensure they were closest to the line and going fast enough to step away from Velsheda and Ranger.

Hanuman led around the top with Velsheda close behind and Ranger about 30 seconds further back. Velsheda closed in on leader Hanuman on the downwind, all the time trying to protect their kite, which had a small rip on the port tape. But after they gybed, it split in half allowing Ranger to close up.

Hanuman rounded the left gate mark 30 seconds ahead of Velsheda with Ranger about a minute behind the leader. The leaders remained unchallenged to the finish gun and Hanuman scored first blood of the season.

After a delay to allow Ranger to try and make repairs to their failed primary winch drive shaft, Hanuman got the better of Velsheda off the start line and was able to hold their rival out to tack above the port tack layline.

Velsheda again showed her downwind speed and was able to roll down to Hanuman on the run, but as they approached the leeward gate Hanuman’s kite hit the water.

Hanuman was penalised for taking Velsheda past her proper course. The combination of Hanuman’s sail in the water and a corresponding messy execution of their penalty left Velsheda to go on and win the second race, crossing over three minutes clear of her opponent.

“Holy mackerel, welcome back to J Class racing,” exclaimed Kenny Read, with a broad smile, “Everybody knows how hard these things are, but that was a reminder these are bloody hard work. I think everyone had their moments of glory today and all had moments they would like to get back but all in all it was great to have three boats out on the start line and racing.

“I think there are growing pains with the scoring system. We scored a one and we’ll take that any day of the week for a boat that has not raced for so long and a crew that hasn’t raced this thing in anger in a long time. It’s as breathtaking as we all remember.”

Read went on to recall, “We made a little mistake at the bottom mark. We got a little wrapped up in match race world. We’ve been racing these boats boat-on-boat for a long time, but we have to remember there are big time differences (on handicap), so we have to not get too involved in the battle.

“And a word for the crew today, the physical exertion never stops between races. It’s hard work setting up for the next one as they pack the chutes, change jibs. It’s hard, hard work. I am proud of the crew and the owners had a blast; they loved the day.”

Ranger’s Moray Gray confirmed that the new crew and the owner were disappointed with their breakdown. They hope to have a temporary solution sorted for Day 2, but they were pleased to have been in the match and proven themselves quick and competitive.

“We had pretty spectacular conditions, up to 23 knots. We were a little late on the start. We had this issue with the pinion shaft on our starboard primary down the first run. We managed to get downwind and back up the second beat a little bit compromised and we managed to finish,” Gray said.

“For our first race with the new team and the new owner, we are super stoked to be in the mix, we are really encouraged.”

Velsheda’s strategist Andy Beadsworth reported, “It was a mixed bag. We take the win and enjoy it. There were some phenomenally exciting moments racing Hanuman, like on small boats, but the first start we were on the back foot.

“We were out of place at the warning signal and that put us off, but on the second start we got a piece of Hanuman, then kind of let them off the hook with a little too much separation. It was a mixed day. The boat is going well, and the crew were tested and responded well.”