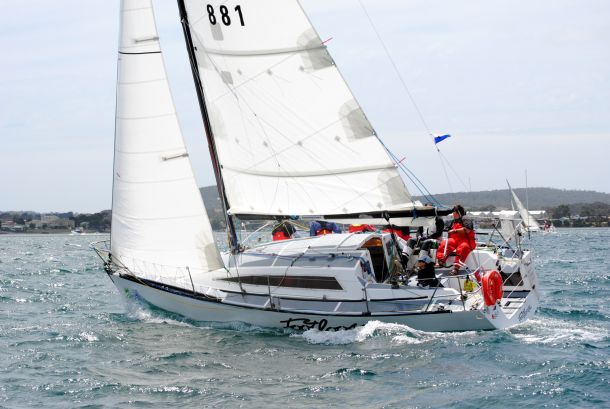 While hundreds of wooden boats were sitting quietly in their berths at Hobart’s Australian Boat Festival at sunrise today, another wooden yacht was adding to Tasmania’s maritime tradition of building fine boats from timber, sailing slowly up the River Derwent to victory in the 89 nautical mile Bruny Island inshore/offshore race.

Footloose, a 30-year-old Young 88, skippered by Stewart Geeves, excelled in the light winds of the overnight race to win the AMS and PHS handicap categories on corrected time. It was Footloose’s second consecutive overall win under AMS scoring in the Bruny Island Race. In an outstanding offshore racing career, she has now won the Bruny Island Race twice, as well as the Maria Island Race, the Launceston to Hobart and taken the Combined Clubs long race series.

“It proves that timber is a great material for building stoutly constructed and fast yachts that maintain their performance over the years,” Geeves said after the Royal Yacht Club of Tasmania announced the results late this morning, citing fellow competitor Don Calvert’s Castro 40 Intrigue as another fine example.

Footloose was built of timber by Peter Milner in Launceston in 1985, while Intrigue was also built at the same time of Huon pine down the Huon Valley and has won nine Bruny Island Races as well as representing Australia at the Admiral’s Cup in England.

“The weather this year again was just right for us, the smallest boat in the fleet, but not so good for the bigger yacht Intrigue,” Geeves added. “We caught up with the bigger boats on the outside leg last night after holding our place sailing down the D’Entrecasteaux Channel. After sailing through The Friars (off Tasman Head, the southernmost tip of Bruny Island) we elected to sail wider out to sea.

“We enjoyed some fast spinnaker sailing in south-westerly winds of 10-15 knots, certainly stronger than those boats that sailed close to the Bruny coast,” he explained. “We sailed into the river about sunrise today to find all but the two big boats, Alive and Cougar II, virtually sitting in a bunch.”

When the fleet picked up a morning breeze Footloose then sailed up the river in a group with Gary Smith’s The Fork in the Road finishing at 09:01:52, and the next six boats crossing the line in within 26 minutes, Footloose finishing ninth in fleet at 09:27:24.

Under PHS scoring, first place went to Footloose by 28 minutes on corrected time from the last boat to finish, Wildfire, skippered by Malcolm Robinson, third place going to Winstead Wines.