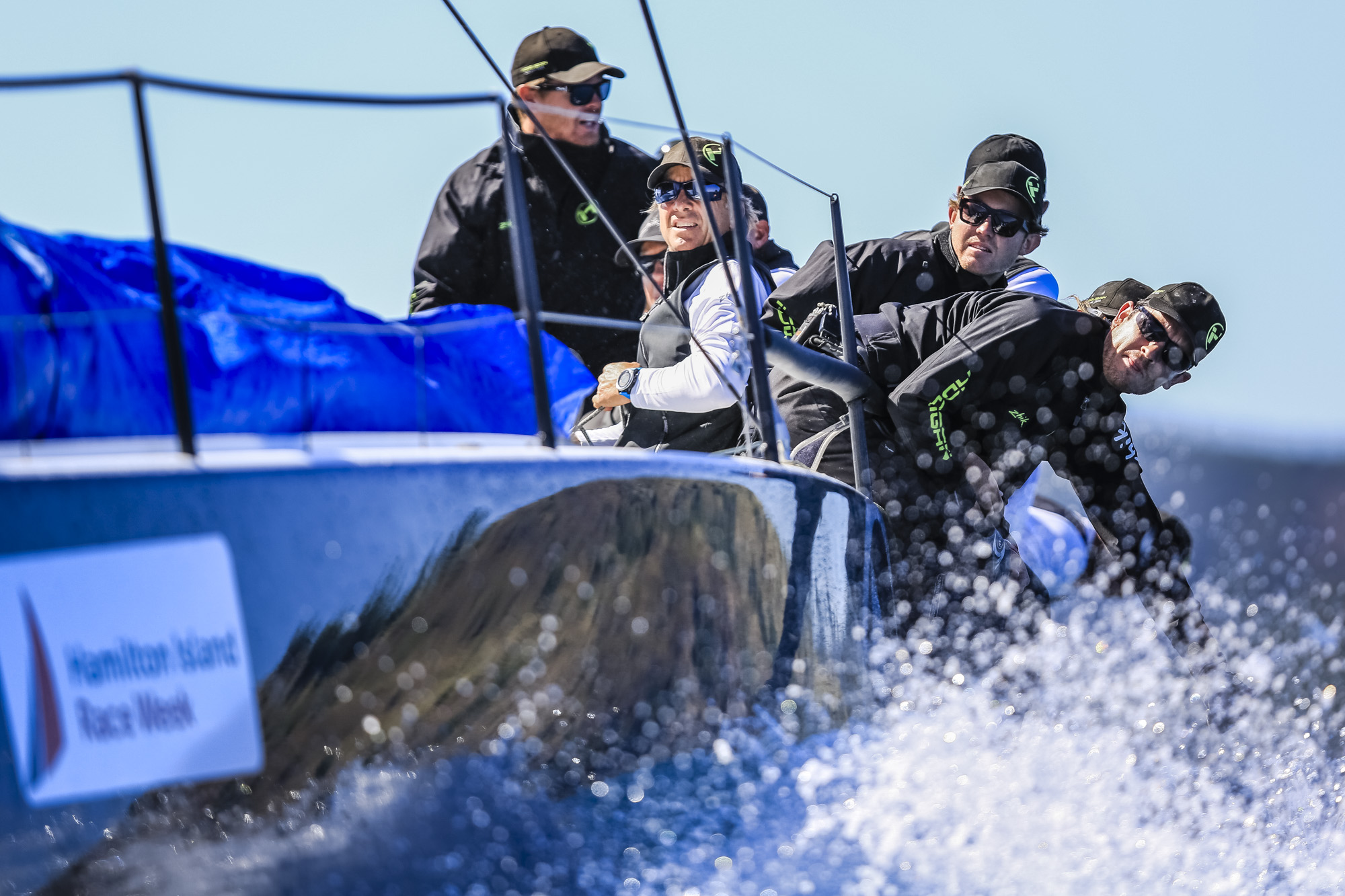 A typical Whitsunday winter blessed the Hamilton Island Race Week fleet: sun, wind and whales, to see out the first half of the annual Whitsunday series.

The classic long and medium race for IRC division 1 and 2 was a 50 nautical mile race Wild Oats XI tidied up in 3 hours 44 minutes, giving them an average speed of 13.3 knots over the course to the north-west of Hamilton Island. Cool winter SSE tradewinds of 23 knots at the start down to 12 knots by mid-afternoon were well-managed by the diverse fleet of supermaxis and other keelboats, multihulls and trailables from around Australia and overseas.

All points of the compass were covered in today’s long and medium distance island courses, stretching as far north as Double Cone for IRC Division 1, Hamilton Island Division 1 and Multihull Racing.

Marcus Blackmore’s TP52 Hooligan is now only one point off Matt Allen’s TP52 Ichi Ban thanks to a corrected time scoop in race three. The calibre of the two 52 crews and the hot competition between the like-boats has the sailing media covering Race Week suitably impressed. “It’s very close racing between us and Ichi Ban, it’s a case of who gets the start, who gets the first shift; in the light airs we have little bit of height on them, but as Mike Fletcher, our coach for some years said, ‘he who makes the least mistakes wins’,” Blackmore shared back at the dock as his team celebrated.

Amongst Hooligan’s crew is Laser gold medallist Tom Slingsby calling tactics and Spanish helmsman Rafa Trujillo, a silver medallist in the Finn Class in the 2004 Athens Olympics and an America’s Cup and Volvo Ocean Race sailor. “He’d been living in New Zealand and the Australian Sailing Team, who we sponsor, managed to encourage him to come and live in Australia and coach the Finns for the next Olympic Games,” said Blackmore.

“I always steer the starts and I did the first windy legs today and Rafa does the rest. He’s a lovely bloke, he’s fantastic, we just don’t understand what he’s saying some of the time that’s all!”

IRC division 2 is proving tough for those trying to chase down Ray Roberts’ Botin 40 Team Hollywood, given their perfect scorecard of three corrected time wins. “The boat’s probably one of the nicest boat’s I’ve ever sailed. Marcelino Botin has designed a beautiful boat and we now just have to sail her well,” Roberts said post-race on Tuesday August 22, 2018.

“Today was a very tricky day of sailing, we had a really tight race with Victoire; they were ahead of for most of the race but we got a break on them. They’re sailing really well and close to us – it’s on every day.”

Hamilton Island division 1 leader Drumfire, Phillip Neil’s Hoek TC78 design, is ahead of Robert Vaughan’s Muir 64 Van Diemen III on a countback in the pointscore for what should be renamed ‘the grand division’ with the beautiful hull shapes of the classic designs among the vintage maxis such as Condor.

The Hamilton Island cruiser racer and Multihull divisions, Non-spinnaker and Trailables started from the Eastern Course and enjoyed variations on a theme that included a downwind run in flat water through the scenic Long Island Sound. The Trailables were the first home, rewarded for their long haul to the Eastern start line with a straight run west to Pine Island and home. First home was BSC Sailing School and overall the local Rhumbmaid with the crew name ‘Team Effort’ leads the series by two points.

Three days of racing for 233 yachts marks the midway point of the 35th edition of Race Week and now there will be a break in the on-water schedule, on Wednesday August 22, with racing set to resume on Thursday.

Results for all divisions