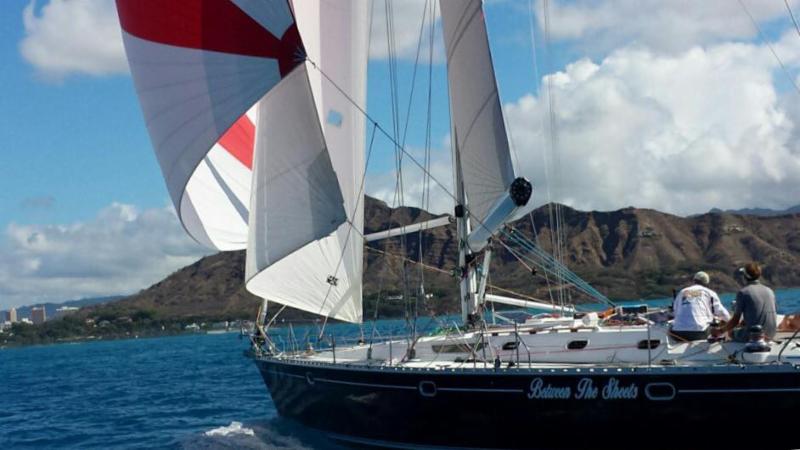 Honolulu, Hawaii – At just about two weeks from the first start of the 48th Transpac, more than half the fleet will by midnight local time tonight be still at sea making their way to the finish of this biennial 2225-mile race from LA to Honolulu. Since Harry Zanville's Santa Cruz 37 Celerity was the first to cross the finish line in the early hours of Friday, boats from the Monday, July 13th start for Divisions 7 and 8, and starters on Saturday, July 18th in Divisions 0, 1, and 2 have crossed the finish line at Diamond Head over the weekend.

One of the boats to finish today in Division 8, the Aloha Division, after nearly two weeks at sea was Ross Pearlman's Jeanneau 52 Between the Sheets, a perennial competitor in the Aloha Division of Transpac. Pearlman was unable to make the race, and turned over the skippering responsibilities to Kerry Deaver, a regular member of the Between the Sheets crew. Deaver was thankful for the opportunity to skipper, despite some rough first days on this trip.

“When Ross determined he could not go, he decided not to let the team down and allowed us to take the boat on the race,” Deaver said. “We had one empty slot and filled it with a young sailor, which is a policy we have: once you hit 16, you have the opportunity to come with us in the race. But the first six days were pretty rough, we never got out of our foul weather gear…no one said much. But once the sun came out and the conditions got better, life on board was more social.”

In corrected time, Tracey Olbert's BBY ketch Marjorie looks strong for the Aloha division win after their finish last night. And in the multihull Division 0 Lloyd Thornburg's Gunboat 66 Phaedo has done it – completed what they set out to do in 2013 but failed due to a broken spar – by finishing the race today. They are also likely defeating in corrected time the first-to-finish multihull, the bright green Extreme H2O, owned by Pat Benz.

And overall it is the Division 7 entry Celerity that still holds the top of the leaderboard, but there are a few Division 2 and 3 entries that are close based on their current rate of speed. Chief among them is Hawaii-based James McDowell's SC 70 Grand Illusion, who was the overall winner of the King Kalakaua Trophy in 1999 and 2011. But another Sled, Chuck Nichols's Andrews 70 Pyewacket, is also close. Both are projected to be arriving into the finish area along with the other Division 3 entries in the pre-dawn hours of tomorrow.

While the overall and some division winners may still be uncertain, the event can declare its Barn Door and Merlin Trophy winners for 2015: Roy Pat Disney's and Bob Oatley's Wild Oats XI had the lowest elapsed time on the course to win the Merlin Trophy, and by being the first monohull without powered assistance to finish the course, Manouch Moshayedi's Rio 100 will win the Barn Door Trophy. Rio will head back to the mainland after the race, but Wild Oats will be heading back to Oz shortly to undergo surgery in preparation for the team's greatest passion, the Sydney-Hobart race held in late December.

Besides the trash seen in the Pacific High by the competitors over the past few days, another annoyance for those finishing now and through tonight are the waves: a high surf warning is up for the south-facing shorelines of the islands for large swells of 10-15 feet.

These waves are providing spectacular surfing conditions, but are dangerous for boats coming into and out of the harbors if their approach is not timed carefully between sets – a cruising sailboat last night got caught in the surf at the Ala Wai harbor venue and is being driven towards shore on the rocks now as a graphic reminder of the power of these waves.

Race managers at Transpac YC have told competitors with overnight arrivals that they may be turned away and asked to stay out at sea until the harbor approach conditions are safe… the advisory notes that the surf is due to subside to 8-12 feet after 0600 local time.