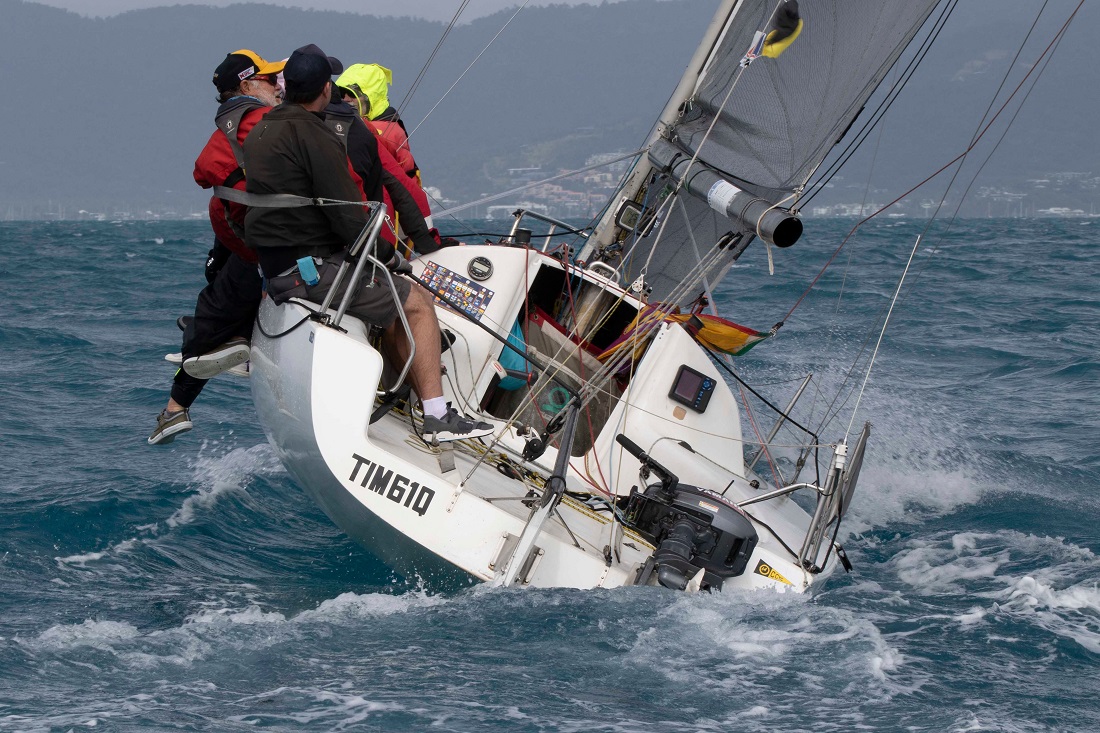 Tim McCall and the Hairy McClary crew from the Capricornia Cruising Yacht Club in Queensland had their day in the sun at Airlie Beach Race Week Festival of Sailing, their race win taking Tim McCall’s Trailable yacht to a one point lead overall.

Hairy McClary, so called because the crew (with the exception of a female on board) have beards, has been sailed consistently well in this tough fleet, with 2-2-4-1 results.

“It’s been fantastic sailing weather all week – bar one little bit when it was light and fluky on Sunday. It’s been tremendous. Today was champagne sailing and we didn’t stuff up. Lack of errors is how you win races,” McCall said.

“The competition is very hot this year – Situation Normal (Jamie and Barry Berndt) and Bella Amore (Renee Cordingly) are doing well,” he says of the two boats directly behind him on the leaderboard. “And things are going pretty well for Sardine (Walter Ian/Raynor Hogg).

“Things are so tight – we won by a whole second today (to Sardine) and 14 seconds to third place (Belle Amore), which is snapping at the heels of Hairy McClary, just one point in arrears, with Situation Normal just a further point away overall.

“We love it here. We get to come for a scenic tour every year on the water. We love the passage races and especially love the last one, the round the buoys race (a triangle course on Pioneer Bay).”.

Victorian yachtsman Gerry Cantwell’s third place in Performance Cruising Division 1, has taken Carrera S to the top of that leaderboard, despite being beaten to the punch today by Femme Fatale (Rob Marshall) and Tasmanian entry, One O Nine (Richard Fader).

“We’ve had a good run,” Cantwell said. “I’ve only got one of my regular crew on board, the rest are people we’ve picked up, mainly from Queensland and some from Melbourne who ran away in time from lockdown.

“We started on Day 1 hoping to practice putting a spinnaker up, but it was too windy. Same on the second day. But the wind has since dropped off a bit, so it made it easier as time’s gone on,” said Cantwell, who is on his eighth Race Week and third with this boat, a Marten 49 that races regularly out of Melbourne.

Division 1 raced a 33-mile course; “It started with short windward leg then a long run to Saddleback, and on from there. It was pretty straight forward. Only half a dozen gybes on the way down. I thought we’d be blanketed by the islands, but we transitioned well,” Carrera S’s owner explained.

“We were on the tail of Mayfair (James Irvine’s Rogers 46)  and they beat us home by about three and a half minutes. They have been beating us by a lot more than that on the water in the previous days. But we have more confidence now. The crew has come together and I told them we are here to have fun – and that’s what we’re doing.”

Sea Bass, Jon Cray’s elegant Swan 42 from Mooloolaba won Division 2 from Paul Jackson’s local boat, Keep on Running. The win has moved Sea Bass into second place behind Brett and Jacinta Cooper’s Tasmanian entry, Crusader Clennett’s Mitre 10, which has a hot crew including some pros on board.

“We rigged the boat right and had the right sort of wind strength,” Cray said. “My boat’s a heavy boat, but it works well in light air, and has a big fin which helps it go well to windward. “There’s a lot of fast boats in our division, but the old Swan is always fast downwind and not bad upwind. It’s not bad when an old glamour wins against the newer models.”

Like everyone else on the course today, Cray loved the 12-15 knot winds and the sun, which finally made a proper appearance. “It was beautiful,” he said.

Richard Holroyd’s Kindred Spirit moved upwards and into the Division 3 overall lead after winning a third straight race. However, the Lotus 9.2 metre is on equal points with previous leader, Blue Moon (Keith Falkenhagen), so there is no room for error and only two days remaining at Airlie Beach Race Week.

In the Non-Spinnaker division, Peter Harrison as he does, is getting better by the day. A second today has cemented his place at the top of the overall standings.

“We blew out one sail on Friday the 13th – and another one today – our No. 1 headsail. We had a spare, so put the furler back on and kept going. We picked the lifts, and the crew did well, we’ve sailed together for a while, the WSC local explained.

“Awesome usually likes lighter conditions, but we got the weight up on the rail today and did well.”