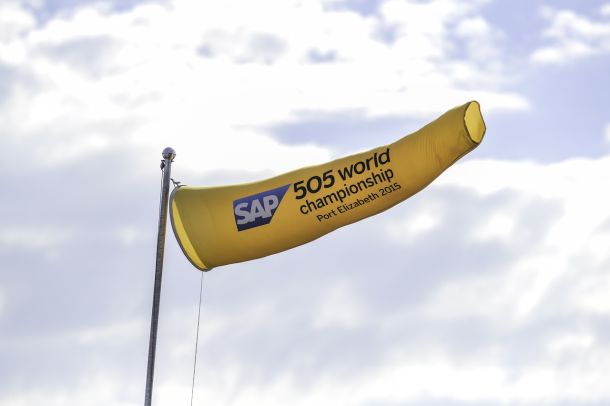 With a westerly breeze gusting across Algoa Bay at up to 45 knots, race 6 of the SAP 505 World Championships was unable to go ahead today.

Port Elizabeth lived up to its reputation as South Africa’s ‘Windy City’, and while the international fleet was champing at the bit to get out on to the bright blue waters of the Indian Ocean, the sailors accepted that the race officer’s decision to abandon racing for the day was the correct call.

“It was definitely the right decision,” said reigning World Champion, Mike Holt, who is leading this regatta after five races. “The breeze was dropping later in the day, but then we would have run out of daylight.”

South African sailor Michaela Robinson is sailing the 505 for only the first time this week. The 14-year-old won the Mirror World Championships at the start of the year, and is now steering the 505 with 17-year-old Jonathan Ham on trapeze. Their combined age is less than many of the sailors in Port Elizabeth, and their combined weight of 120kg is not much more than some of the individual crews in other boats. Even today, though, Robinson would have loved to have gone out sailing. “The 505 is great fun, we would have found a way of sailing it, I think,” she said.

Jonathan’s 21-year-old brother, Alex, is racing with their father, Warwick, on trapeze. As well as offering high performance racing, the 505 sees different generations of sailors coming through the ranks. Currently 3rd overall, Australia’s Michael Quirk says one of the great appeals of the Five-Oh is the broad range of competitive weights. “Because we have so much control over the rig and the sail shape, you can race a 505 to a high level at a really wide range of shapes and sizes.”

Today, however, was too much even for the versatile and seaworthy 505. A lot of wind is forecast for tomorrow too, although the hope is that it will abate sufficiently for two races to go ahead on Thursday.

The 505 class has been thriving for 60 years. Here’s a look at the history of the Five-Oh…