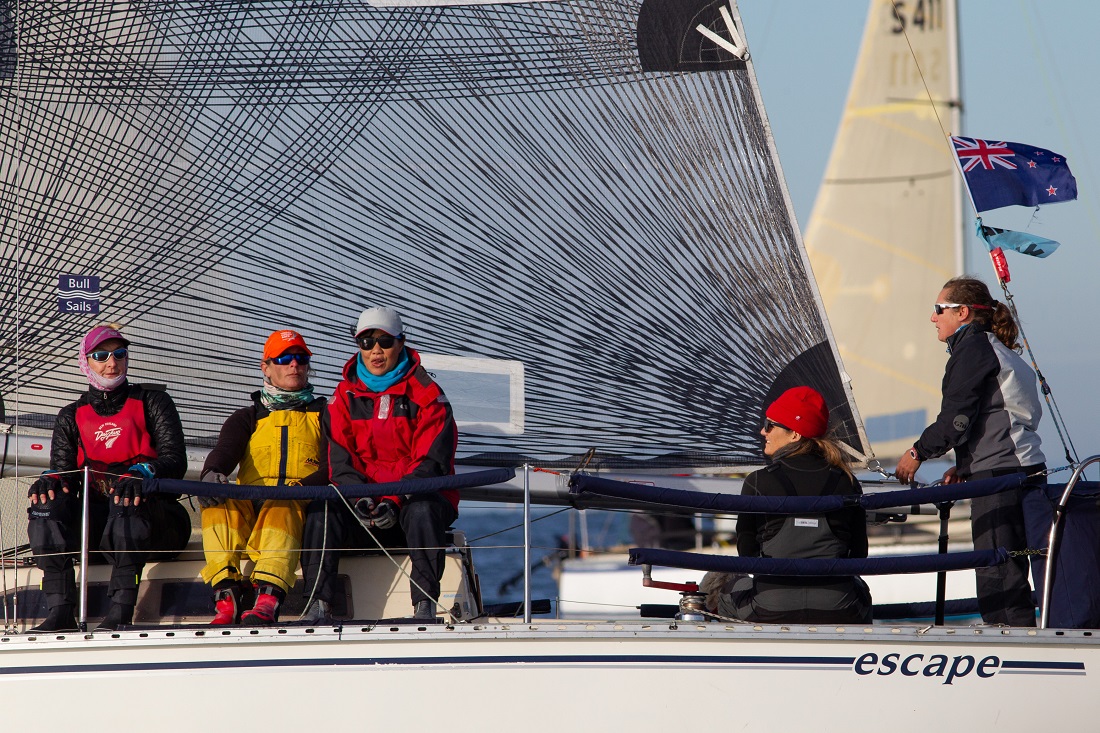 A hot international fleet inclusive of Olympians, short-handed offshore sailors and a foiling Moth building sailor are among the 30 entries from Australia and New Zealand so far signed up to take part in the 29th Australian Women’s Keelboat Regatta (AWKR), to be held by Royal Melbourne Yacht Squadron (RMYS) from 8-10 June.

Gojnich, a former AWKR entrant, enjoyed an Olympic career spanning 20 years, representing Australia three times – in the 470 Women’s and in the Yngling at Beijing in 2008, a class she still competes in. The Sydneysider will represent Royal Sydney Yacht Squadron as skipper of the J/70, Spike, last year’s Division 1 winner, with Madonna Derks (Vic) in the skipper role.

Canadian Danielle Kennedy (nee Dube) sailed the Laser Radial at the London 2012, spending nine years on her national team and competed at Olympic class regattas, Sail Melbourne and Sail Sydney, along the way. Representing Mooloolaba Yacht Club, she will take the helm of Bon Vivant, an S80 yacht, with the class sailing in its own division. So far 10 are entered.

Holly Farmer, from Tauranga, competes in Kiwi Moth and keelboat events. She is a past National Women’s Match Racing champion with sailing DNA coursing through her veins. Her father, Jonty Farmer, competed at two Olympics in the Finn (Mexico 1968, Montreal 1976).

Joanna ‘Jo’ Breen has contested the AWKR previously and will be at the helm of prominent Victorian Sydney 38, Chutzpah38. She has made 15 solo ocean crossings, raced in the Rolex Sydney Hobart, done the Melbourne to Hobart double-handed, and placed second (PHS) and third (IRC) in the 5500 nautical mile Melbourne Osaka race with her S&S34, Morning Star.

The RYA instructor joined an international all-female crew skippered in 2018 by Olympian, Sharon Ferris-Choat, on the trimaran Gitana for the 654nm Groupama Race around Noumea. Under the banner, Team Magenta, they finished second multihull over the line.

Entry number 30 is Leonora ‘Leo’ Eeckman, who will again skipper Le Cascadeur, the Southern Ocean 31 she sailed to AMS and PHS victories with Ryan Blackstock in the Double-Handed race this past weekend. Eeckman was also crowned overall winner of Victoria’s 2019 Port Phillip Women’s Championship Series, counting seven wins and a second place in her score.

Committee chair and competitor, Kristen Buckland says, “Entries have far exceeded our expectations. On 8th of May last year we had nine entries and ended up with 27 on the start line. At the same time this year, we already have 30, with an expectation of 40 in total. The Championship is really gathering momentum.”

Before the AWKR, the McGrath AWKR Lecture Series, organised by the AWKR at RMYS, will be held on 16, 23 and 30 May. For the benefit of interstate competitors, they will be live streamed on the AWKR Facebook page: www.facebook.com/AustralianWomensKeelboatRegatta

Professional yachtswoman, Sophie Ciszek, is the guest for the first lecture. At 33, she has covered more than 300,000 ocean miles and will talk about her experiences on the bow of Mapfre in the last Volvo Ocean Race and the Sydney Hobart, in which she finished second overall last year with the all-female crew on Wild Oats X – Ocean Respect Racing.

Speaking on 23 May is New Zealand double Olympian, Sharon Ferris-Choat, who skippered Gitana in the Groupama Race, promoting the Magenta Project (it seeks to empower and inspire women across the globe through supporting elite success), of which she is an ambassador

Ferris-Choat is currently co-skippering Maiden, the yacht Englishwoman Tracy Edwards sailed around the world in the Whitbread Race. Edwards found and restored the boat and invited women with a proven track-record in sailing to retrace the steps of the Whitbread while mentoring, educating and empowering girls around the world.

Last by not least is Ben Fells, an international sailing judge and umpire as well as a national Race Officer; and Mel Hitchen-Haw, head sailing coach at Mornington Yacht Club with a strong sailing background. Fels will talk about the racing rules, while Hitchen-Haw will discuss racing strategies and techniques on 30 May.

If you are looking for crew, want to crew, or looking for a boat to borrow, go to: https://www.awkr.com.au/crew-noticeboard or contact Allicia Rae:awkr@rmys.com.au or (03) 9534 0227

Prospective entrants have until 1700 hours on Friday 31 May, 2019, to enter. However, late entries may be accepted at the discretion of the event’s Race Committee.

Enter online and view Notice of Race at: https://www.awkr.com.au