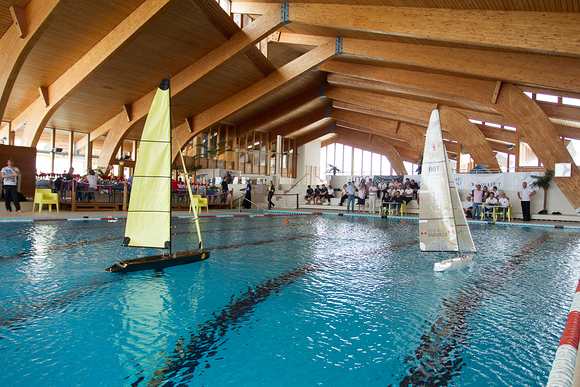 In a thrilling final race against the long-time participating club, Royal Swedish Yacht Club who made its way up all the way from the Repachage, the GYC- One team with Ben Worbs, Philippe Jann and Timothy Müller had a home-run and after 13 years won back the prestigious Interclub Ski Yachting event in Gstaad.

The 2016 edition, which was held in the world famous mountain resort, brought together teams representing yacht clubs and sailing teams from all over the world. Past winners include the Royal Yacht Squadron, Société de Genève, Bayerischer Yacht Club and Yacht Club de Monaco.

The by invitation only event, which consists of giant slalom Friday night ski races, followed by match racing with remote control carbon fibre yachts in Gstaad's semi-Olympic indoor pool, powered by state-of-the-art wind machines on Saturday, welcomed again a huge number of 22 teams from all over the world.

Given that one of the club's objectives is to promote youth sailing, an identical event was organized also for the under 16, which was won by team Optimist Thunersee with Anja von Allmen, Linus Leibundgut and Laurent Stadler.

The prize giving ceremony for the Interclubs was held with over 120 guests in the beautiful clubhouse, during which Karin Jaggi, female world speed-record holder with 66.31 knots in wind surfing gave a short, but very inspirational presentation of her speed-record activities and has been nominated Honorary member of the GYC.