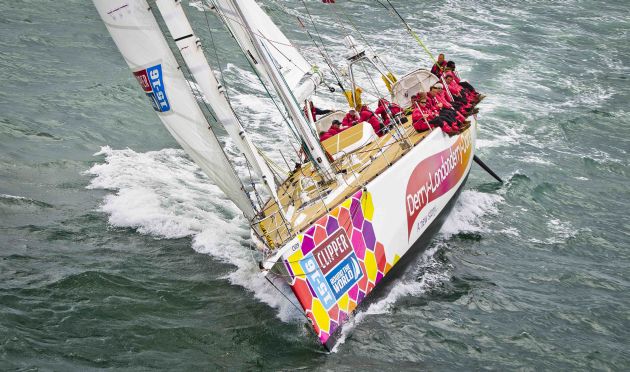 Today, China’s Sailing City of Qingdao put on a spectacular display for the arrivals of the first four of twelve teams taking part in the world-famous Clipper Round the World Yacht Race.

Delegates from the city joined them on stage and more than 100 drummers lined the pontoon to form a guard of honour as the crew disembarked the yachts. Winner Derry~Londonderry~Doire was first to sail through the Olympic Rings and Torch, a reminder of the city’s role in the 2008 Beijing Games, with fireworks heralding their arrival into the marina. The winners were followed by teams Garmin and LMAX Exchange to complete the podium wins.

The Sailing City • Qingdao Cup promised to be a rough ride in tough upwind conditions and the final days in particular the Yellow Sea lived up to the billing, as the fleet was hit by a stronger than forecasted storm which brought violent wind gusts of 80 knots. More than 220 international sailors set sail from Da Nang, Vietnam two weeks ago to race the 1700 nautical mile course have battled against the adverse weather conditions and plummeting temperatures in what has been described as the toughest race of the 14 race series yet.

A second win in a row for Derry~Londonderry~Doire Skipper Daniel Smith and his crew, who also managed to pick up maximum points at the Scoring Gate and Ocean Sprint. Dan says: “We are really glad to get the clean sweep and so happy that our hard work paid off. In the last race we managed 16 points so getting 17 this time was very satisfying. We are working our way up the leaderboard so it’s a good place to be.

“This is my first time in Qingdao, what a welcome. It really is great to be here. We certainly feel this has been the hardest race of the series so far. We had very light winds which are tricky to keep the boat moving in, and we had storm force winds as well so it has been very, very hard on the crew who all worked fantastically hard, and I’m very proud of them.”

On the stage, officials presented Skippers Dan, Ash and Olivier with long cloaks and a staff, a Chinese tradition for returning warriors, to mark the achievement of their Clipper Race challenge. Before the Stormhoek bubbly was sprayed, all the teams were then given red scarves and cuddly toy monkeys and told: “This year is China’s year of Monkey, and monkeys are deemed clever. By presenting you these cute mascots, we wish all the brave sailors a lucky New Year and all the best!”

Celebrating his team’s third consecutive podium finish, Garmin Skipper Ash says: “It is great to be here. In one word I would sum this race up as varied. We’ve had pretty much every navigational challenge you could imagine out there, including fishing fleets and a quite severe storm. It has been pretty tough going but we’re really happy to be here and we worked really hard. We got the boat here in one piece and that is the main thing but to get a podium place for the third time in a row is really great. We’re really happy with that.

“We’ve broken the curse for third place and now we have to break the curse on second place. I really do feel like it is only a matter of time until we get that top spot, We were leading for a while on this race but unfortunately we ran into a bit of a wind hole which set us back a bit and Derry~Londonderry~Doire came from nowhere and took us a bit by surprise. We’ll learn from it and we won’t let it happen again. First place is only a matter of time away.”

The fleet battled a storm with gale force winds in the Yellow Sea days before crossing the finish line and the route from Da Nang threw up new obstacles for the crew with busy traffic and fishing nets scattered across their route.

Happy to return to the podium after a fourth place finish in Race 7, LMAX Exchange Skipper Olivier Cardin says: “I definitely agree that this race has been one of the toughest so far. It was a short one so we had to concentrate hard from the very start and you don’t sleep much because every mile counts. It was very close. We had light winds, too much wind. The storm was huge and was long, about six hours so it was very tiring. That was one of the hardest nights on the boat so far.

“At times the forecast was not quite what we ended up with at times which made it very hard to choose the right sails and meant we changed our sails a lot. One day we made about 15 headsails and about 15 spinnaker changes so all the crew have pushed incredibly hard.

“We were very happy to just cross the finish line in the end. Even last night with just 20 miles to go the wind turned very light and once again we had a final challenge to just keep moving. We are pleased to be back on the podium.”

One of the toughest endurance challenges on the planet, the Clipper Race takes eleven months to complete and is the world’s longest ocean race. Established by legendary Sailor Sir Robin Knox-Johnston, the first man to sail solo, non-stop around the world in 1968 – 69, it is also the only event of its kind that trains amateurs to sail around the world.

Forty per cent of Clipper Race crew have no sailing experience when they sign up, and crew on this leg of the race represent over 20 nationalities.

The fleet will enjoy the warm hospitality of Qingdao before setting sail for Race 9 across the North Pacific to Seattle, USA on Sunday 20 March.