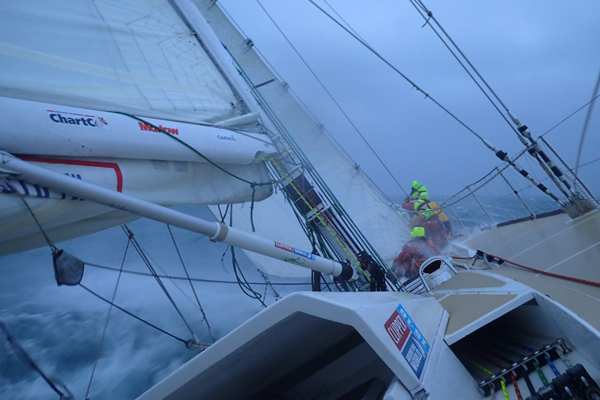 The two teams still at sea, ClipperTelemed+ and Unicef, are enjoying more favourable winds as they make their way to the finish line of Race 8: The Sailing City • Qingdao Cup.

Yesterday and the previous day had seen very light winds following the violent storm which passed over the fleet. It is cloudy today and the light winds will die off around the finish, and as the teams approach Qingdao, the sea temperature drops, so there’s more chance of fog.

Paul Atwood, Skipper of Unicef, said things had been pretty stressful on board with all the marine traffic as it made best speed to Qingdao after accepting twelfth place and one point. “It has been an interesting night and morning for the good ship Unicef. Last night we seemed to be trapped in a moving screen full of Automatic Identification System (AIS) fishing boat targets. Our AIS range was some 30nM and we seemed permanently centred in fishing fleets, as well as a constant stream of commercial traffic heading mainly north and south.

“This is an incredibly busy stretch of water! Anyway, having managed to catch one net and then drop it, the rest of the evening was fine, motoring under the stars, dodging traffic, so if our track looks a bit all over the place you now know why!

“This morning has been more of the same except that about three hours ago the wind which had swung to the south but was very soft, began to fill in a little so now we are motor sailing at much better speeds towards Qingdao,” Paul added.

Both ClipperTelemed+ and Unicef will enjoy a welcome ceremony in Qingdao on Sunday after arriving in at 1330 and 1500 respectively, local time.

Daily Update will resume when the next race, Race 9, Qingdao to Seattle across the mighty Pacific starts on 20 March.