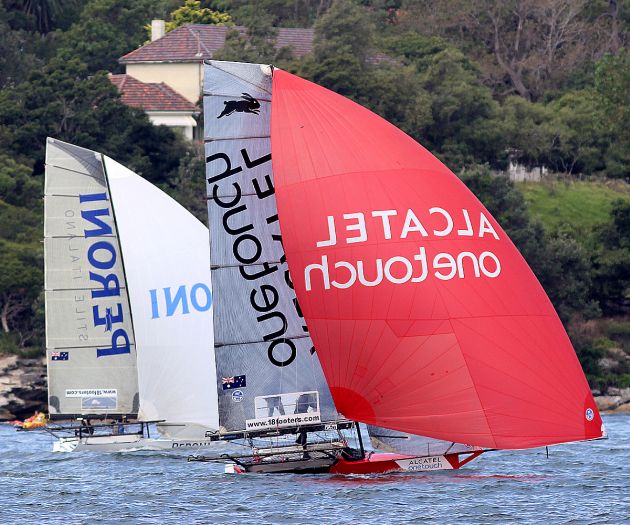 Race winner Alcatel One Touch and Peroni on the run to the wing mark off Shark Island. Photo 18 Footers League.

Stephen Quigley, Tom Quigley and Sam Ellis were near the lead most of the day in Alcatel One Touch and the official winning margin was 1m4s. Ilve (Ollie Hartas, Mark Muirhead, Harry West) finished second, with Haier Appliances (Pedro Vozone, Tim Westwood, Lorenzo Cerretelli) a further 35s back in third place.

The race was sailed in a light NE wind which produced some close fleet racing over a three-buoys course. Ilve took advantage of the three-buoy system to grab the lead on the first spinnaker run. Asko Appliances (Marcus Ashley-Jones) was in second place, but challenging strongly, followed by Alcatel One Touch, Triple M and Compassmarkets.com, Haier Appliances, Peroni, Coopers 62-Rag & Famish Hotel and Mojo Wine (James Ward).

Ilve held a two boat-length lead over Asko at the bottom mark, but the Asko team was dominant on the next windward leg to open up a 20s break over Alcatel One Touch, which had moved into second place, ahead of Ilve.

Asko’s lead was only two boat lengths over Alcatel One Touch at the bottom mark on the second lap, and the pair had edged away from Ilve, which was still a clear third. Triple M and Haier Appliances were together in fourth and fifth placings. After a gap, Peroni was sixth, followed by Coopers 62-Rag & Famish Hotel and Mojo Wine.

Asko Appliances crew worked the northern shore on the left hand side of the course and appeared to have a race winning lead before the crew went around the blue marker and not the white marker as required by the team’s handicap.

Next Sunday will be the last race of the 2015-2016 Season. It is Race 11 of the Club Championship,  and the Australian 18 Footers League will have its usual Spectator Ferry available, leaving Double Bay Wharf, alongside the clubhouse, at 2.00pm, to follow all the action.