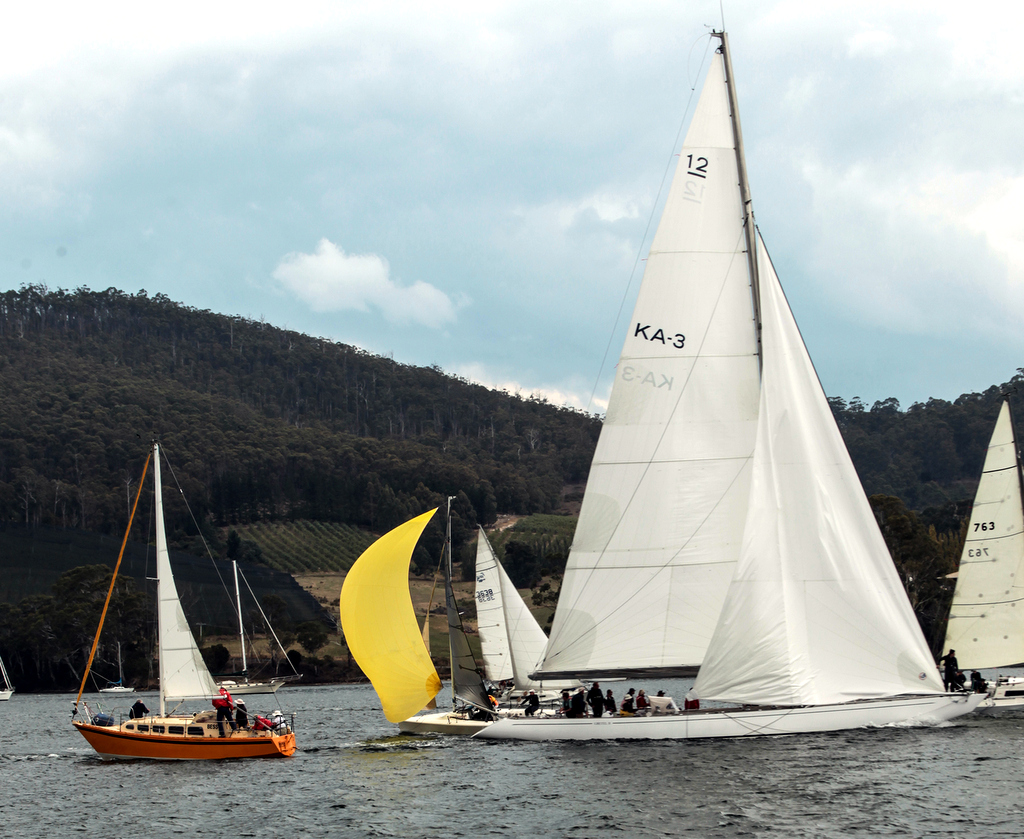 Gretel II towers above other yachts in the Cygnet Regatta. Photo Jessica Coughlan.

The regatta, first held in 1863 and revived by the proactive Port Cygnet Sailing Club, is one of eight traditional sailing regattas held in southern Tasmanian waters from spring to autumn each year.

Despite the setback of the severe bushfires last month, this year’s regatta attracted 48 boats from Port Cygnet Sailing Club, Huon Yacht Club and Kettering Yacht Club as well as a contingent from Hobart clubs, including the near 50-year-old 12 Metre class yacht, now based at the Royal Yacht Club of Tasmania.

Gretel II, skippered by Jim (now Sir James) Hardy, was Australia’s challenger at Newport, Rhode Island in 1970, winning one race and losing a second on a protest against the New York Yacht Club’s Intrepid.

Gordon Ingate and a ‘Dad’s Army’ crew took GII to Newport again in 1977, but she could not match the new Twelve Metres.
Yesterday, Gretel II outsailed the fleet in the Classic division and beat modern yachts on corrected time in Division One.

Skippered by Steven Shield from the Royal Yacht Club of Tasmania, Gretel II towered above the rest of the 48-boat fleet as they raced around a course on Port Cygnet’s Kangaroo Bay in a steady 14-15 knot northerly breeze.

Sabre is one of the few remaining ‘heavyweight’ sharpies which were a class at the Melbourne Olympics.

Champion Yacht of the 2019 Regatta for its consistent sailing over the three-day, four-race regatta.