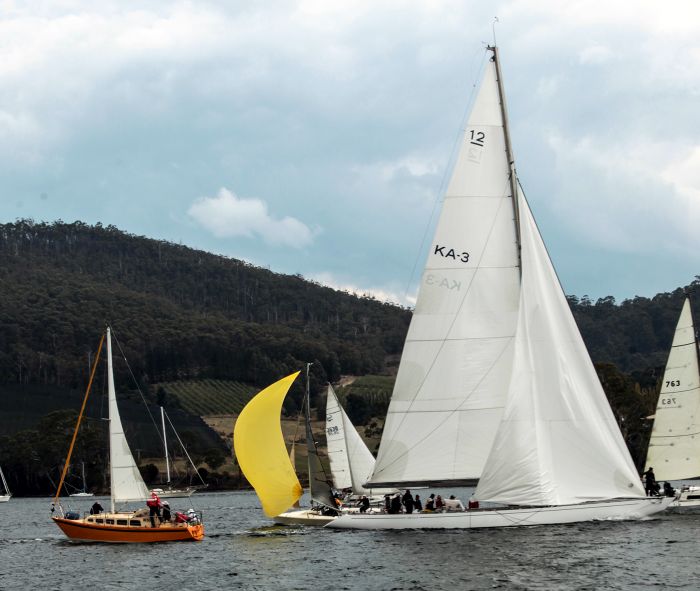 Gretel II, the famous Australian yacht that might well have won the America’s Cup in 1970, turned 50 today, the classic 12-Metre Class yacht sitting sedately in her marina berth at the Royal Yacht Club of Tasmania on Hobart’s River Derwent.

Gretel II was launched in Sydney on April 10 in 1970 for media magnate Sir Frank Packer, built by Bill Barnett to a design by Alan Payne. She was the last America’s Cup boat to be built of wood.

She is now owned by NSW yachtsman Mike Maxwell who commissioned a major refit in New Zealand in 2009. Maxwell decided to relocate GII (as she became known) at the RYCT, his reasoning being that the open waters of the River Derwent were more suited to sailing a 12-Metre than on Sydney Harbour.

She recently contested the Port Cygnet Regatta down the D’Entrecasteaux Channel, winning the passage races from Hobart to Kettering and Kettering to Port Cygnet, with Maxwell flying into Tasmania to skipper the crew of RYCT members headed by Steven Shield.

Sir Frank Packer had first challenged for the America’s Cup with Gretel in 1962, returning to Newport, Rhode Island in 1970 with the new and innovative Alan Payne design.

Intrepid won the first race when Gretel II’s David Forbes was swept overboard. He managed to hang onto a sheet and scrambled back on board.

Then, in a controversial second race, Gretel II crossed the finish line first, but was subsequently disqualified due to a collision at the start, a decision that angered Packer.

Intrepid won the third race, but Gretel II recorded a win in race four by 1 minute and 2 seconds. Intrepid went on to win the fifth race and retain the America’s Cup for the New York Yacht Club 4-1.

Many observers, including the 1977 America’s Cup US skipper Ted Turner, believed that Gretel II was a faster boat but that the cunning tactics of Bill Ficker and skills of the American crew was the deciding factor in Intrepid’s win.

Among Gretel II's cre , as port trimmer, was John Bertrand who in 1983 skippered the Alan Bond-financed Australia II to victory in the America’s Cup.

Gretel II was used as a trial horse for Bond’s Southern Cross in 1974 and in the 1977 America’s Cup she returned to the fore as one of four yachts vying to be the Challenger for the ‘Auld Mug’.

Skippered by Gordon Ingate, Gretel II’s veteran crew became known as ‘Dad’s Army’, but the team was eliminated in the trials. Returned to Sydney and the Royal Sydney Yacht Squadron, the 12-Metre was restored by a group of yachting enthusiasts but became neglected again until bought by Mike Maxwell.

In Hobart today, prominent yachtsman Steven Shield commented on Facebook: “I have had the absolute privilege of being the team leader to sail her and oversee her ongoing maintenance,” adding his thanks to Adam Goode, Rod Chamberlain and his team at Hurricane Marine, Michael Vincent, Mathew Wand Jane Foster, Swiftshore, and all his sailing friends who have helped get her out sailing.

“We did have a special birthday party planned for GII but the coronavirus put a big stop to that,” Shield said, adding: “If you have access to the locked RYCT marina, head out and give her a pat today.”

Words: Peter Campbell, Steven Shield, references Wikipedia and its various sources, including Peter Campbell who covered the America’s Cup Challenge Matches as a yachting journalist from 1974 through to 1987. He was a member of the onshore team (media) with Gordon Ingate’s bid in 1977.