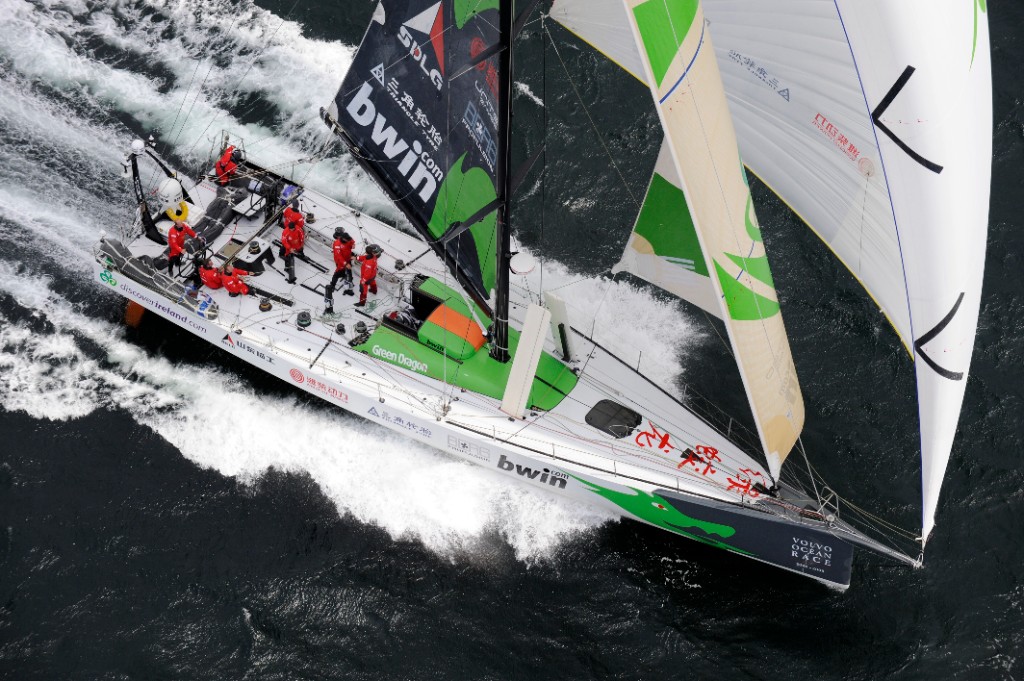 Gothenburg – 29 May 2018: Green Dragon, the first Chinese-backed entry in the Volvo Ocean Race, will join Volvo Open 70s Telefónica Blue and race winner Ericsson 4, plus a host of other historic boats from previous races on the start line of the Legends Race in June this year.

Skippered by Ian Walker, who went on to win ‘The Volvo’ two editions later, Green Dragon not only shared a Chinese sponsor’s hopes, she also carried the first Chinese crew member in Guo Chuan, who sailed as the team’s media crewmember. Guo went on to become a true legend in Chinese offshore sailing competing in the Mini-Transat and setting the record for a single handed circumnavigation in a 40-footer. On his last record attempt, to set a new Trans-Pacific record on the trimaran Qingdao, the former IDEC, Guo Chuan was lost at sea and all that was found on his boat was a severed harness tether.

It is to honour Guo’s memory that Wang Bin, CEO of UBOX and a keen sailor himself, decided to charter Green Dragon to take part in the Legends Race. Wang Bin was Guo Chuan’s main supporter on his Mini-Transat and solo circumnavigation, part of a long association between the two men.

Green Dragon powered by Ubox will be sailed in the Legends Race by a combination of sailors from the east and the west, with Wang Bin and a number of his fellow members of the China Association for the Promotion of Sailing joining the western owner Johannes Schwarz, his skipper Benedikt Clauberg and a number of European sailors.

Back in 2008-09, it was the second time the notorious Volvo Open 70 was used for the Volvo Ocean Race. Green Dragon was a modestly budgeted campaign, led by first-time skipper, Britain’s Ian Walker. At the start, it all looked promising for Walker and his team, when on Leg 1 they led the fleet through the scoring gate of Fernando de Noronha and eventually finished just off the podium in 4th place. On Leg 2, from Cape Town to Cochin, India, Green Dragon broke her steering gear, resulting in a crash gybe, which broke her boom as well. Despite this setback, she still managed to cross the scoring gate in third place, but eventually finished down the order in 7th place.

Throughout the race, Green Dragon struggled for speed and it wasn’t until transatlantic Leg 7, that she managed a podium finish, in third place, a feat that was also repeated on Leg 8.

Thereafter she was used to promote Dubai’s bid for the World Expo 2020, after which she was dismantled and stored in a shed in Ireland. Several years later she was acquired by Austrian Johannes Schwarz, who had previously owned Heineken (WRTWR1993-94). Liberated from her shed in 2015, and with the help of many people including some Irish Sea Scouts, she was eventually put back together and later that year she sailed to her new homeport of the Adriatic port of Trieste, Italy.

Nowadays she takes amateur sailors offshore racing in both the Mediterranean and the Caribbean, with the exception of a charter from former race winner, Frenchman Lionel Péan (winner 1985-86 L’Esprit d’Equipe), who competed with her in Les Voiles de Saint Barths in the Caribbean.

In 2017, while racing in the Caribbean, she was dismasted. Incredibly, Johannes Schwarz made a jury rig and sailed her back Ireland to collect her original spare mast, which was still lying in Green Dragon’s shed.