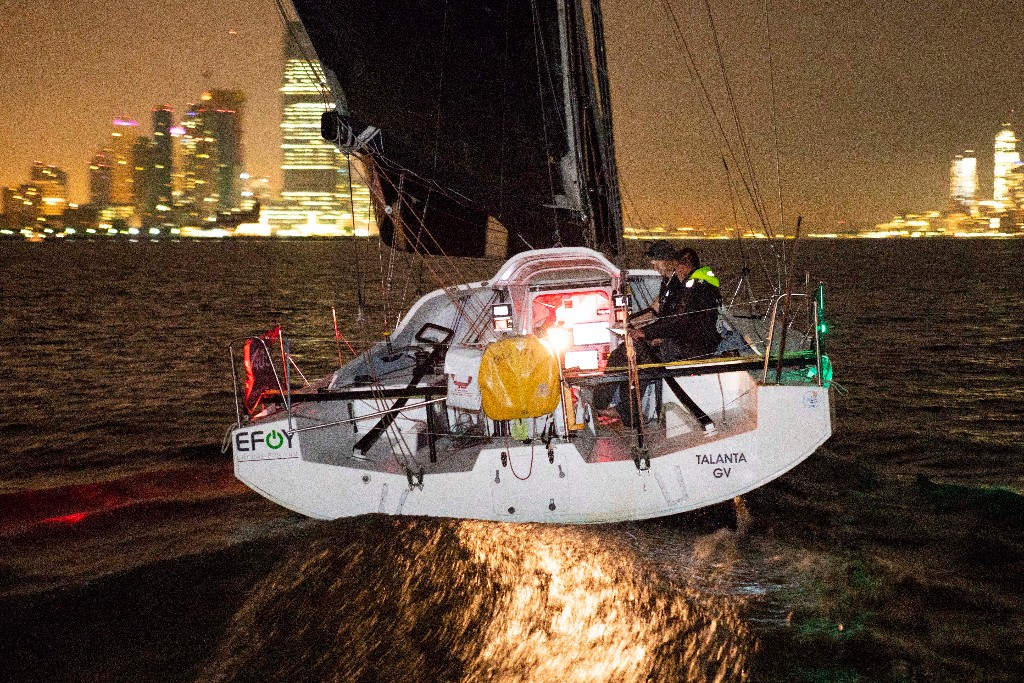 The Swedish flagged Class40 #95 skippered by Mikael Ryking and Karl Jungstedt secured a provisional third place in the early hours of Wednesday May 30th. Their Pogo40s2 crossed the finish line at 02h49h12 with an elapsed time of 86h49m12s to complete the 648 nautical mile first offshore leg. #95 Talanta was closely followed by #37 First Light sailed by former Olympic campaigner Fred Strammer and Sam Fitzgerald. The duo competing in their first Class40 race are also the youngest team in the fleet. With their fourth place finish they have set themselves up nicely for both the second leg to Portland, Maine and the subsequent Inshore Series. Full race results can be seen below.

Mikael Ryking, #95 Talanta – 4th place finisher:
“It was a test of patience, especially the light winds, especially in no winds at all. It was really light throughout the race… Everyone was changing places in the ranking, but we were just climbing, climbing, climbing. We start off with mixing up the two red buoys, #4. So that was our mistake so we had to go back after the start. After that into the Gulf Stream, you can cut the corner or go out. So you can either be behind at first and then start going up, so this time Cathrine Pourre (Eärendil) was a little bit faster because once we came up here we had a few boats slightly ahead of us but some of them just sailed across the current and some of them didn’t reach it [Gulf Stream] so we managed to climb.”

Sam Fitzgerald, #37 First Light – 5th place finisher:
“She’s an older design, being number 37, there is no point trying to out reach the boats that have hard chines and are able to get up on the step a lot quicker than we can. She’s built for VMG runs so we VMG ran her the entire time and it paid off for us. We had no autopilot since 12pm on Saturday and have been hand-steering the whole way. As Fred said midway through, ‘Autopilot can’t surf waves,’ so that worked out pretty well for us, but it was definitely took a toll from a tiring stand point.”

Liz Shaw O'Toole, #81 Esprit Scout – 6th place finisher:
“We had three days of crawling around down below and getting the boat prepared for the race, so we acquainted ourselves with the systems as much as we possible could ahead of time. Kyle (Hubley) has heaps and heaps of miles on Class40s, as do I. We've never actually raced together, but we had a blast, laughed every single mile of the way, even when we were becalmed like six times for hours at a time. We were working hard to to find the boat speed. There were some dark moments. I think it was truly a game of snakes and ladders. We had one really good ladder surfing through the Gulf Stream but then it was all snakes after that, unfortunately for us!”

The race began at 12:00pm on Saturday, May 26th from the Charleston Maritime Center, where teams representing nine countries battled throughout the just over three day leg. The teams left Charleston Harbor in sunny skies and a 15-knot southwest breeze with a large number of spectators both on land and on the water.

Provisional results are listed below.

*Result pending protest to be heard in Portland, Maine.