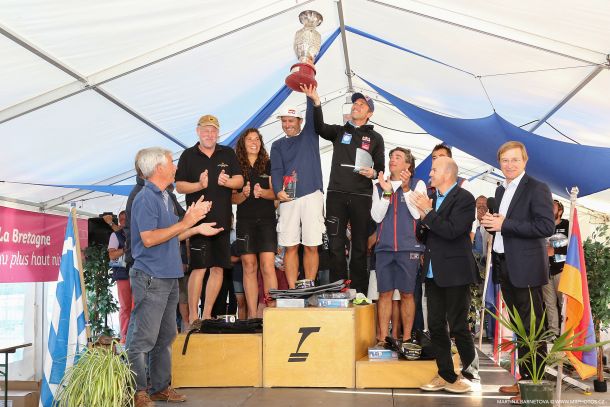 Undoubtedly they were the fastest boat in every condition! They dominated in nine out of the 10 races of the championship by performing not only fast but also smart sailing.

This year we had 27 Tornado boats sailing from seven nations, Armenia, Australia, Czech Republic, France, Germany, Greece and Switzerland sailing in beautiful Carnac, Yacht Club Carnac. Six of them were mixed teams and three of them raced with Classic boats (no spinnakers). This was the reason why we had three different results, for the new rig Open, the new rig Mixed and the Classic category. The Classic ones made their appearance again here in Carnac after 15 years of absence so it is of high importance to have them with us.

We had perfect sailing conditions the whole week. All races started just on time with the Race Committee and Jury doing a great job. We have to remark the hospitality of the French people and thank them for organizing this event.

So, the first racing day was sunny and warm with light winds from 5 to 10 knots. It was Nikolaos Mavros and Alexandros Tagaropoulos from Greece who lead the board for the first day in the Open category. Jean Marc Cuanillon and Gudrun Kolb, Switzerland lead in the Mixed one while Zakarian Michel and Ialenti Jeremy, Armenia were the leaders in the Classic category.

A colder and a bit windier second day brought some changes to the results for the Open and Mixed Categories. The Greek team of Dany Paschalidis and Kostas Trigonis gained the lead in the Open category now, while the Germans Roland and Nahid Gaebler beat the Swiss and are first in the Mixed Category.

The days that followed had light to medium winds and even though we had some tight battles for the medals as the teams where very close in points, the leaders managed to maintain their places.

These are the statements of our champions:

“Even we did not expect to lead the championship, especially after the 2nd race that the wind was so light and shifty, the coming days we corrected every tactical mistakes we have done and this was enough. Our performance was getting better and better every day so it was proven to be very easy for us. We managed to take very good strategical decisions and some excellent tactical moments that gave us the ability to win almost every race.

The race course was perfect. Race Committee did a great job and the venue proved one of the best to sail!

This was my 5th Tornado World title and my 19th, including World and European ones both in Tornado and 470 class. I will try to go on sailing till I get the blackjack!! 21 trophies!!”

“No, it was not easy to win. The first six races we rounded the mark behind, in 2nd, 3rd or 4th place and had to sail really good to win these races. In the second part of the championship we sailed more confident and put pressure to our opponents so this part was easier.

It is difficult to combine work and training for two reasons. First because my job is quite demanding, working 24 hours per day and second because of Kostas program with the Nacra17, we did not train at all before the championship. I trained only with Maria Tsaousidou and Michalis Papadopoulos a couple of days before the championship and that was it.

This championship was organized really professionally. We expected this because Y.C.Carnac organizes many years now maybe the biggest catamaran race, the Eurocat. Mr. Paul Bastard the Race Officer is professional in his job as a one of the most talented race officers of ISAF, so we had an excellent job for the organizing and the racing committee.

After this victory, it is a challenge for us to win the cup six times in a row and beat the record that Darren Bundock and John Forbes have. So we have to win it one more time in order to have the most championships from all the other athletes that sailed the Tornado the previous years. But I also want to go on sailing this boat because it is fun and there is nice attitude of the people so it does not have to do with the performance only. It is a way of life.

Besides the people that are next to us these years, our families, my wife and the Nautical club of Thessaloniki I need to thank Thanos Vakalopoulos, the guy who helps us since 2004 that we started sailing Tornado. He did great work with the sails. We use OS3 for many many years now and we are proud of it and we will try to make them faster and better every time. Thank you!”