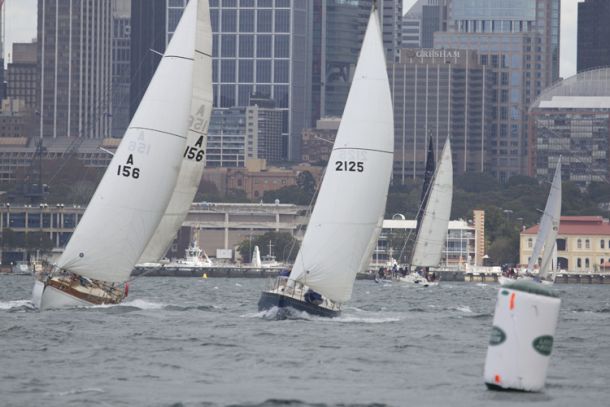 With only eight entries, the field was reduced in numbers from previous years, with many who would normally enter still on their way home from the Wooden Boat Festival in Hobart.

The race was nonetheless a hotly contested one, with other famous old time names such as Fidelis (overall winner of the 1966 Sydney Hobart), Struen Mari (the 1951 Sydney Hobart line honours winner) and other Sydney Hobart golden oldies: Mister Christian (originally owned by famous yachtsman Peter Kurts), Lahara and Southerly.

Some of these yachts were skippered by their original owners, who revelled in the gusty south-west and southerly winds Sydney Harbour delivered today.

“The forecast was for nasty winds up to 30 knots early on, so we felt it was prudent to shorten the course from the start,” Principal Race Officer Steve Kidson said. “But at 11.00am, we had just eight knots from the south-west, which built to 10-12 knots and came right back to the south by start time at 11.30am.”

Although the wind strength increased, it was nowhere near what was forecast.

“The biggest gust we recorded was 23-24 knots as yachts were coming up to the finish,” Kidson said. “I think everyone was happy to be home at the CYCA; it was quite cold and the wind was picking up.”

In the Ladies Race, Paula Dock steered the Salona 44, Last Tango to victory in Division One Spinnaker pointscore from Louise Stevenson at the helm of Wax Lyrical, an X-50 design. There were just 19 seconds between the two on corrected time, while Justine Anderson was third overall at the helm of the Sydney 38, The Goat, a further nine seconds in arrears in a very close race.

Division Two was taken out by Susan Hardy, who skippered the Cape 31 Clewless? to victory over the Peta Short skippered Saltshaker and M, steered by Plum White. The latter two, Sydney 36 cruiser/racers, finished a mere six seconds apart on corrected time, showing both were steered well to their handicap.

In the Non-Spinnaker pointscore, Vivienne McMahon overcame her rivals in Division One at the helm of George Girdis’ Jarkan 12.5 Marloo. Second was Kim Clinton steering husband John’s (of Wolverine country band fame) Holy Cow!, a Beneteau Oceanis 50, whose colour scheme truly lives up to its name. L’Attitude, a Beneteau 40.7 helmed by Audrey Egan, rounded out the top three.

Lucky Kim Clinton was thrilled with second place and being first to win the Land Rover experience this season.

“It was a lovely day out – windy, but pleasant – a lot of fun,” she said this afternoon. “We’ve spent the weekend celebrating Shoni’s (their dog) 13th birthday and she came out with us today, of course. She’s well known round the Club because she’s always on the boat with us.

“It was a treat to be skippering today – it’s probably our best result for a while. I usually do the main and I am so used to John (her husband and Holy Cow!’s owner) yelling at me, because if something goes wrong, it’s always my fault. He had to be nice today because he wanted us to do well.

“It was lovely to have the boot on the other foot – it was very funny,” she said. “John suggested to John Cameron (CYCA Commodore) that the Club might want to have a few divorce lawyers on hand after the race and that they should put them into a room next to the protest room. They both agreed there would probably be more in the divorce lawyer’s room than the protest room!

“We’re really looking forward to driving the Land Rover. It’ll be nice to have a taste of something up-to-date; a car where you press the button and the windows go up and down. I drive a heavy old wheelbarrow, and I’m just about due for a new car, so we’ll see,” she finished.

Pauline Christie steered the Tasman Young 43, Viva, to a win in Division Two over Hubcap II, an Oceanis 40 skippered by Anna Wlkens and Defiant, a Bavaria Cruiser 41s with Beth Morley at the helm.

Just missing out was CYCA Youth Academy graduate, Tara Blanc-Ramos at the helm of Applejack, a Beneteau Oceanis 31. Blanc-Ramos is making a name for herself in the Club’s Elliott 7 class and as a crew member, recently finished second overall in the Marinassess Women’s Match Racing Regatta.

Weekly prizes are awarded to first, second and third placegetters in each division and include exclusive CYCA Land Rover Winter Series merchandise.

Racing in the Land Rover Winter Series continues next Sunday when the first pointscore race will be sailed.