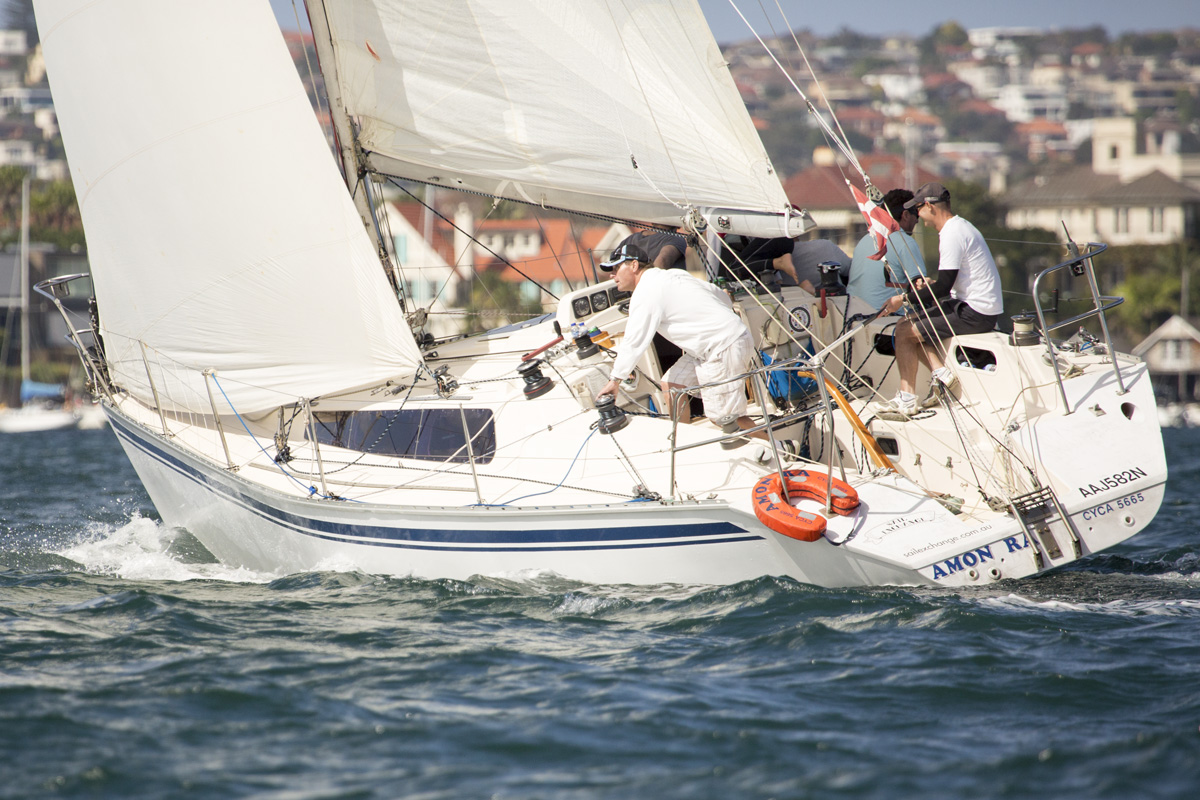 Point Piper was picture-perfect on Sunday morning as the 61 boats contesting the Cruising Yacht Club of Australia’s Great Veterans and Ladies Day races congregated there, ready to open racing in the Land Rover Winter Series, held on Sydney Harbour each winter.

Eleven yachts, representatives of Sydney Hobarts from 1945 to the mid-eighties, lined up for the Great Veterans race, among them names like Southerly, Suraya, Mr Christian, Anitra V, Mercedes IV and last year’s winner, Lolita.

Nigel Stokes’ Fidelis filled out the top three with his Knud Reimers 61, which took line honours and broke the race record in the 1966 Sydney Hobart.

This is the first time Crafoord has fielded an entry in the Great Veterans Race.

“I was pulling my power boat off the slip and I saw Amon Ra. I wanted a boat the family could sail, so I bought it and here we are,” the yachtsman said of the yacht originally owned by John Partridge who cleverly named it ‘In a Pear Tree’.

“I made the sails for him in 1978 and we hoisted the very same genoa I made for the boat – rust stains and all,” said Crafoord agreeing his was a veteran boat with a veteran crew, with the exception of his nine year-old son Ben.

“We’re all veterans – I sailed it with a few of my old mates like Hugh Brodie and Steve ‘Keano’ Keane.

“The weather couldn‘t have been more perfect. A nice 7-13 knot south-easterly – and it was a beautiful day – sunny with no sign of rain. It suited Amon Ra perfectly and it was good beating Shipway, “he said of Peter Shipway at the helm of Love & War.

Paula Shires steered the Salona 44, Last Tango, to win Division 1 from 15 entries. Shires beat her nearest rival, the well-named Arch Rival, with Lauren Connors at the helm, by over two minutes. Shires was also drawn to receive a lift stand launch and two free laydays for   Last Tango, a prize that the Noakes Group will donate weekly to a lucky division winner.

Melissa Geeves outclassed her opposition in Division 2, sailing her father-in-law’s Beneteau 34.7, Speedwell, to over a one minute win from Peter Fallon’s Twilight Zone, with Michelle O’Brien at the helm. Dee Pollett steered Alpha Carinae to third overall.

“It got pretty close towards the end – we could see all our rivals in in the last 10 minutes,” Geeves recalled.

“I had my husband Campbell helping and our ‘rock-star’ for the day, Lindsay Stead, she said of the authoritative yachtie of BoaTEC boat building fame. “They talked me through it.”

In the 22-boat Non-Spinnaker divisions, Lauren Walsh was the victor of Division 1 at the helm of the NS369, Trim. Walsh beat the Farr 30, Foreign Affair, helmed by Lisa Wilkinson and Reve, a Beneteau 45 F5, skippered by Victoria Stuhlmann.

Division 2 was won by the perfectly named ‘Shorething’, with Jessica Barr at the helm. Jacqui Sapir was second, steering Defiant, with Bill Mirow’s Privateer in third place.

Racing in the Land Rover Winter Series continues next Sunday when the first pointscore race will be sailed.

One lucky division winner each week will be drawn to receive a week-long Land Rover Range Rover Evoque experience, while a second lucky winner will receive a lift stand launch and two free laydays, kindly donated by the Noakes Group.