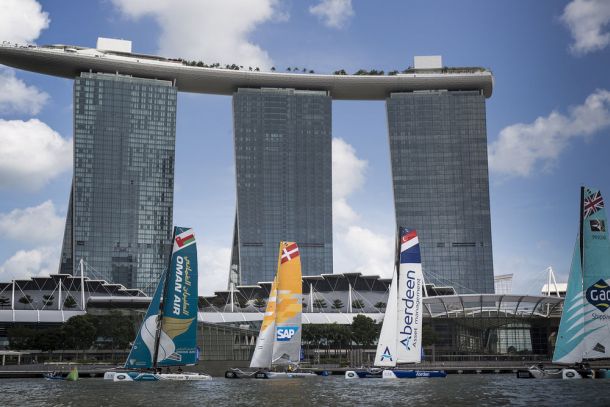 He said he wanted to win and wouldn’t settle for second this time round. And for Leigh McMillan and the team on The Wave, Muscat their campaign to become 2015 Extreme Sailing Series champions couldn’t have got off to a better start. Under the gaze of the towering Singapore city skyline, the team representing Oman executed a consistent strategy in trying conditions, sailing to victory in three of the eight races sailed to finish the day just where they wanted: in pole position. However, at this stage in the game, it is always tight at the top of the leaderboard, and with the rest of the fleet showing a real depth of talent and putting in performances to make McMillan earn every single point, it is well and truly game on for the next three days of Stadium Racing.

Speaking at the opening press conference, McMillan said: “We are going to try and win, that’s our plan. But we know it’s not going to be easy with the new faces on the circuit. We just have to keep doing what we do well and keep fighting to be at the front.”

Dockside after racing, he summed up the day: “It was great to be back out on the water and thrashing it out with all the new teams this year. The conditions were certainly challenging, at the extremes of what we have seen here in Singapore before – particularly in terms of the gust range, so it was pretty full on.”

Eight races were sailed – the first of up to 250 this year – with five different winners as the majority of the fleet struggled for consistency in the continually shifting breeze. With a wind range from 2 to 18 knots, and gusts that peaked at 26 knots, the teams’ tacticians had it all on to minimize mistakes, read the shifts well and sometimes to simply make the most of the cards they got dealt.

SAP Extreme Sailing Team had the starts nailed, with the best average starting position according to the SAP analytics, which helped them to two race wins and they looked to be the driving seat heading into the final race. But they slipped to the tail in the final race of the day, which cost them their lead to finish the day in a solid second place.

The team’s co-skipper Jes Gram Hansen explained just how tough the conditions were; “I think it’s difficult here because the wind changes a lot, but that also means you can get some opportunities even if you don’t get off the line that well. I think we figured a little bit of consistency in the madness and we were able to play that, which worked well for us. It’s still early days, and some of the new teams will start to find their feet, and I’m sure they will get stronger throughout this regatta, and then throughout the whole year. But so far so good.”

With Red Bull Sailing Team lying third, it was a good day for the team led by Austrian double Olympic champion Roman Hagara, in their first foray with their new helmsman Jason Waterhouse who were the fastest average boat downwind. Hagara summed up what was a challenging, but satisfying day. “We had some good starts and then some good finishes including a first and a couple of fourth positions. I think everyone is feeling the same out there as you have so many ups and downs as the wind is constantly changing and shifting around. I think we will have the same conditions tomorrow so shifty and gusty. You just have to keep your heads up and make as few mistakes as possible.”

Showing impressive signs of early form, the new teams of Lino Sonego Team Italia, racing under Land Rover colours in Singapore, and Beko Team Turx, managed to show the old guard some new tricks, continually mixing it up near the top of the fleet. Lorenzo Bressani, who is juggling a Rio 2016 Olympic campaign with competing in the Series, was particularly impressive, playing a low risk game, setting up for manoeuvres and executing them precisely to finish the day in fourth place – tied on points with the more experienced Gazprom Team Russia.

Dockside after racing, Bressani commented: “It feels like a good day. It was tough out there and our tactician did a good job to keep the speed of the boat consistent. It is very important for us not make any big mistakes. For tomorrow, we need to think about the power onboard and sustain that level of energy throughout the day.”

Beko Team Turx are also well within the hunting pack in sixth place, two points ahead of Oman Air under the guidance of new helm Stevie Morrison. The young Aussies on GAC Pindar made an early charge taking honours in the opening race. But the team struggled to recover after rudder issues in race two, and finish the day in eighth, with Team Aberdeen in ninth and with a bit of catching up to do – and plenty of opportunity still to do it with three days of racing and potentially 24 races still to come.

Tomorrow and for the next three days, the action on Marina Bay Reservoir will continue with the support of Host Venue Partner Aberdeen Asset Management. Fans around the world can watch the stadium racing live online from 1600 -1730 local time (GMT+8) on the official event website, www.extremesailingseries.com.