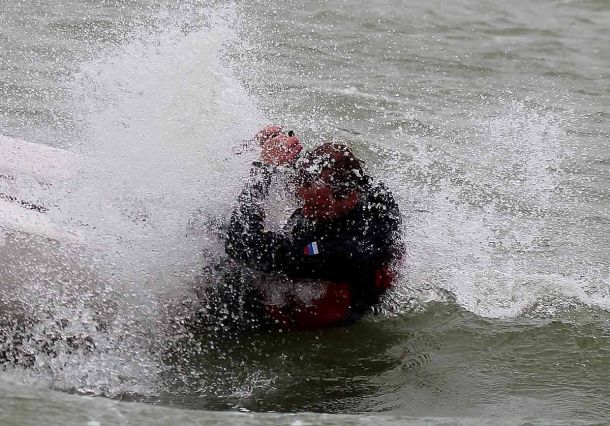 No racing was possible on the fourth day at the Finn Silver Cup in Hoorn as strong winds caused the abandonment of all racing.

The fleet was sent out on time for the scheduled start at 12.00 but it soon became apparent that the wind was above sensible limits with many boats capsizing in the fierce gusts. After one postponement the race officer abandoned racing as the wind hit 31 knots and sent the fleet back to the harbour, where racing was eventually abandoned after the wind refused to moderate.

However the sailor's enjoyed the brief sail with a long taxing beat back to the club through some steep, short waves.

The 2012 Junior World Champion, Martin Robitaille (CAN) reflected on his week so far. He is one of three Canadians here this week. “We are three junior Canadians training together. We had some awesome training this spring. Two of the guys have only joined this year and they have made huge improvements and I'm really glad to be there to give them some advice on the Finn, but so far I'm pretty happy for them where they are. I have been having a bit of a hard time here this week. I'm still in the fight, so I just need more races, but I can't force it.”

“Kyle Martin (CAN) and Riley Finch (CAN) are still in High School, but they are both showing great potential. They are not going that quick here. I have been able to adapt better, but in training they are both a similar speed to me. They are both from the Laser, just 19 and 20, so both young, but still very big. We eat well in Canada.”

On the decision to abandon, “I think it was a good decision. We are all Juniors we are all under very limited budget, so if we break a mast it's very hard for us to recover from that. I capsized today and I touched the ground. My mast was only five feet under the water. And I was walking beside my boat. So it was definitely the right decision.”

In the evening the sailors enjoyed the 'Captain's dinner' at the WSV Hoorn clubhouse attended by many local dignitaries.

While the forecast seems to be changing hourly, Thursday's weather is predicted to be a return to summer, with light winds and high temperatures in Hoorn. In a change to the schedule again, three races are planned from 11.00. The Finn Silver Cup will conclude on Friday 11 July.