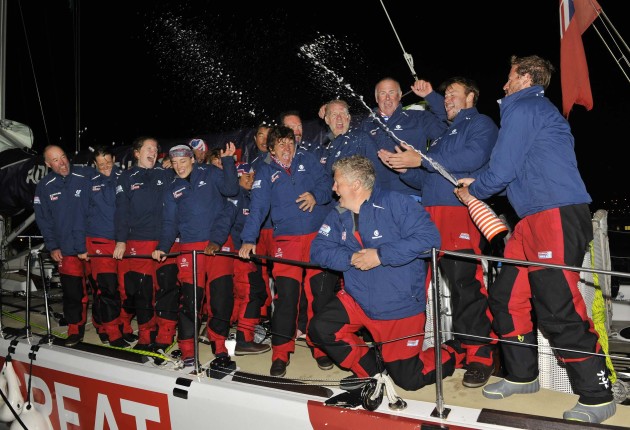 GREAT Britain has taken Line Honours in a high speed battle across 3,400 nautical miles from Brazil to South Africa in the second leg of the 14-race global series that forms the 40,000 nM Clipper Round the World Yacht Race.

This leg across the South Atlantic Ocean is the Stormhoek Race to the Cape of Storms and conditions didn’t disappoint, pushing the fleet on in a fast and furious crossing with some record speeds in excess of 30 knots, with the front runners averaging a credible 10 knots across the entire 14 day dash from Rio de Janeiro to Cape Town.

British Sailor Peter Thornton, the GREAT Britain Skipper said: “It is a great sense of achievement for the crew and relief, because you really want to be first across the line if you even have that hint of a possibility.”

The final nail-biting finish played out in the dark around 2200 local time (2000 UTC) as three teams jostled for places with the massive iconic presence of Table Mountain felt, if not seen, as it cast a wind shadow across the closing stages near to the finish line. The light winds that Table Bay is renowned for created huge concern for the crew as Mother Nature played games with their prospects following a Force 7 blast with gusts well in excess of 30 knots just hours earlier.

Garmin had gone slightly further out and looked to trump its two adversaries when it too got caught in a wind hole, not to escape until it was too late.

GREAT Britain sprinted towards the race finish off the V&A Waterfront to take Line Honours at 2030 UTC; Derry~Londonderry~Doire broke free of the wind shadow to finish at 20.40.18 UTC followed by Garmin at 2102 UTC.

Peter Thornton added: “The tension was incredible in those last few miles. I must admit I was getting very worried because we had been neck and neck with Derry~Londonderry~Doire, Garmin and Mission Performance for the last 72 hours, and as we got closer to Cape Town in the final hours it was so close. Derry~Londonderry~Doire was just yards behind us again, a little bit like the first leg so it could’ve been anybody’s race.”

The South African Western Cape based Stormhoek Wines, the Official Wine Partner of the Clipper 2015-16 Race, provided special edition magnums of sparkling wine for each team to celebrate completing the Stormhoek Race to the Cape of Storms in style.

After a closely fought battle for the finish line, Derry~Londonderry~Doire was second to cross and Skipper Daniel Smith said: “It’s been a drag race to the finish. Table Bay is renowned for wind holes, one minute one boat is doing 10 knots a minute later doing 1 knot while another boat was sailing past it. It’s very tricky. I am very proud of the whole team.

“We had the full extremes of weather, we had some very windy conditions and they dug deep and fought hard. The results seem to be getting better, I think the team has learnt a lot and is working well together.”

Having led for most of the 3,400 nM race, Garmin slipped towards the end and was the third team to cross the line. Skipper, Ashley Skett said his crew will take a lot from this race: “Although we led for a lot of the race, we never thought we had it in the bag.

“We were very confident that we had a decent enough lead to make it through until about two days ago and then we went into the high pressure that was forecast and there was no way around it at all. The rest of the fleet caught up. It wasn’t great for us but we have proved we can hold our own and be competitive so I think that is something to take forward into the next race.”

Mission Performance was fourth across the line at 0053 UTC Thursday 22 October.

This race is being run on an elapsed time basis and the final positions and points will be awarded in ascending elapsed time. The shortest time wins. This is to account for the late start of LMAX Exchange and Qingdao after repairs following damage caused outside of racing during the stopover in Brazil. They started three days 14 hours and ten minutes after the rest of the fleet.