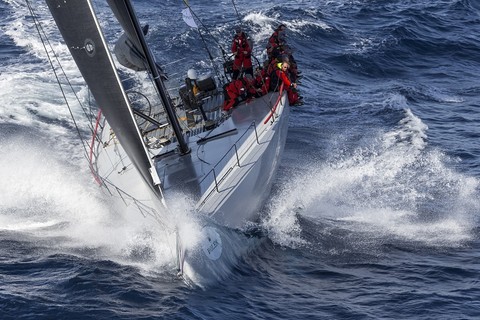 George David was presented with a Rolex Yachtmaster I Rolesium at the line honours prize giving held at the Royal Malta Yacht Club before day break this morning.

Rambler 88 is a far cry from George David's Rambler 90, which set the Rolex Middle Sea Race  record in 2007 (47 hours 55 minutes and 3 seconds). Rambler 88, on the design numbers is 20% faster than Rambler 90. Rambler 88 has an enormous sail area and features five metre vertical daggerboards, as well as three metre horizontal foils, which lift the boat when sailing at top speed. The canting keel also produces significant righting moment, allowing the boat to carry a huge amount of sail area aloft and still remain in control.

The super light conditions over the first two days of the 2015 Rolex Middle Sea Race, scuppered any chance of breaking Rambler 90s record. On the other hand, to finish over 100 miles clear of eleven other canting keel yachts was proof of the immense power of Rambler 88.

“We broke the record in 2007 but that has not been broken this year, so it is nice to keep that one intact.” commented George David. “This was a slow race, although we did have incredibly varied conditions, we saw zero to 23 knots of wind speed and everything in between and every cardinal point of the compass for wind direction and wind transitions of up to 90 degrees. On one of those, we went from the drifter sail to the J4 heavy weather jib. In respect of the record, the first half of the race killed any chance and in the second half we had 160 miles dead up wind from Trapani to Lampedusa.

This is a new boat this year and I would say we have had a very good season. Reliability has been virtually 100% and that is important in a boat like this and for this race, we have had a dry boat, which we didn't have for the Transatlantic Race; it takes a while to find all the leaks and things like that. I would say we have had the short end of the weather in our races this year, definitely in the Rolex Fastnet, although we won our class and beat Comanche, it was a small boat race with good wind coming behind for the little boats. In the Transatlantic Race, we won our class and beat Comanche but we were fourth overall and that was a function of the time of the starts. We were the last start of four, separated by a week and we didn't have the weather, we sat in a high of Newport for two and a half days. So I would say in 2015 we have not had the best of the weather but in 2007, 2008, we had the best of the weather you could possibly have, so we have had our share of great weather. So what goes down goes up and I am expecting better weather for 2016.

For this race (Rolex Middle Sea Race), it is nice to have line honours but this boat was built to be good on IRC corrected time in ocean racing; that is what it was designed for and a lot of that is the function of the fleet. I would have been concerned if we had not taken line honours for this race because our allowance with the second highest rated boat, Momo, is about 15% and if we had not been ahead of them on the water, I would have been upset.

The overall win under IRC is out of our hands now, it depends what happens to the breeze but I feel that there will be boats that will beat us. We carry an unusual rating penalty, which are side foils. These foils are only effective when boat speed is over 20 knots and that costs us a 2.5% rating penalty and that will probably cost us a place or two in the race but that is a call that we made.”

Whilst well over 100 yachts are still racing. Momo's time, corrected by their IRC rating, is potentially a race winner. There were no celebrations on board but the international crew of professional sailors did make their way into the Royal Malta Yacht Club to a warm round of applause and an ice cold drink. Momo's owner, Dieter Schön, knows too well that overall victory could still be won by several other yachts still racing.

“The start went well for us and I think we performed perfectly all the way to Sicily but as expected, the first night was very difficult to find the right way. We parked a few times but we passed through the Strait of Messina very well and we were super downwind to Stromboli. In front of Palermo, we parked for maybe five hours. We got going again but came to another stop at Lampedusa, so there were a lot of parking lots around, which made it a difficult race to sail. However, racing in IRC, you have to wait for the last boat before you can win, perhaps we have won our class.”

In IRC Two, the biggest threat to Momo's overall lead is from two Italian yachts, Michele Galli's TP52, B2 and Vincenzo Onorato's Cookson 50, Mascalzone Latino. However, Momo's performance in the second half of the race is exemplified by the fact that at Favignana, Momo was just minutes ahead of the two Italian yachts. By the finish, Momo was one hundred miles ahead. Mascalzone Latino and B2 are expected to finish the race late tonight or in the early hours of tomorrow morning.

The vast majority of the fleet have made slow progress along the north shore of Italy; only 18 yachts had passed Favignana by this afternoon and no yachts from IRC Class 4, 5 or 6 had passed this northwest corner of the course. The early part of the Rolex Middle Sea Race had favoured the smaller yachts, that scenario has now changed.

Fresh pressure is expected to come from the northwest by Wednesday afternoon or Thursday morning, but every cloud has a silver lining. Weather models are predicting a Mistral, the cold northerly wind that is created by the Alps, and with it, there could be a significant increase in pressure, similar to last year's storm force finale.

Jamie Sammut, owner and skipper of Unica is taking part in his third Rolex Middle Sea Race. Last year, heavy weather forced Unica to bow out. Jamie and his crew are well prepared and determined to finish the race, Unica is currently at Favignana, the place at which they retired last year.

“Crew’s spirits are high, even though there were some very frustrating moments when wind seemed to be non-existent and all the crew could do was sit and wait it out.  Today has been better with the crew pushing hard to gain momentum and speed, although winds are getting light again but we know that big wind is on the way.”