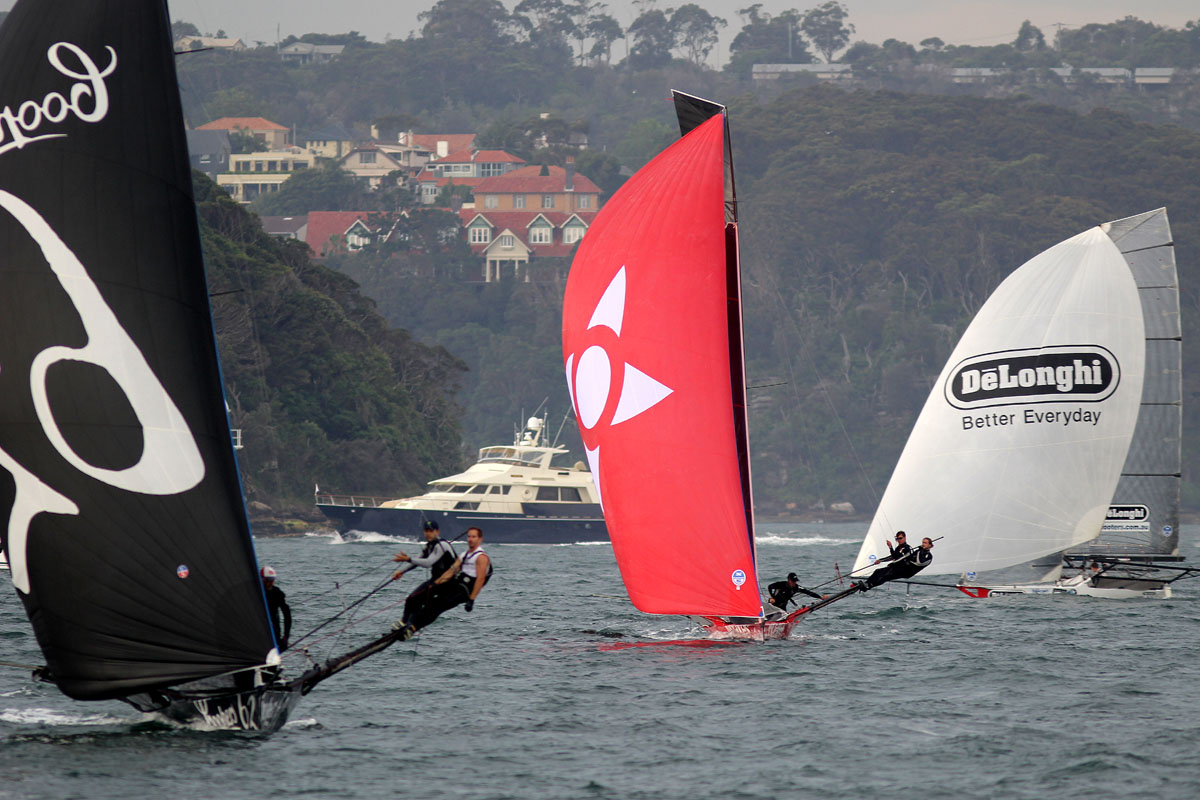 The Australian 18 Footers League’s 2015-2016 Season started on Sydney Harbour today when a fleet of 14 teams faced the starter in the R. Watt Memorial Trophy race.

A  crew change and a new skipper but a great first up win as Gotta Love It 7 scored a 1m19s victory over Coopers 62-Rag & Famish Hotel, with Thurlow Fisher Lawyers another 12s back in third place.

Six-time JJ Giltinan winning skipper Seve Jarvin moved into the bow of Gotta Love It 7, John Winning Jr. became the new skipper and Scott Babbage on the sheet, but the crew work was faultless in the light, variable North East conditions.

There was little between the first three teams over the early stages of the race with Gotta Love It 7 only 4s ahead at the first windward mark.

Thurlow Fisher Lawyers became the third leader in less than a minute as the fleet set off under spinnaker on the run to Rose Bay.

An early gybe by the Thurlow crew after passing the Totem Pole mark proved costly as the team became caught in a wind shadow off Shark Island and surrendered the lead back to Gotta Love It 7.

The breeze was extremely light and the fleet bunched between Shark and Clarke Island before Gotta Love It 7 turned for the second windward leg with a narrow, 20s lead over Thurlow Fisher Lawyers.

There were some impressive performers behind the three leaders as the Noakes Youth team, led by Ash Rooklyn, sailed an excellent first race together.

Rooklyn, Josh McKnight and Daniel Nixon are all top sailors and showed they are going to be a real force as the season progresses.

Sean Langman, the man behind the Noakes Group involvement in the 18s and skipper of Noakesailing, was also well placed for most of the race before dropping back to finish ninth as the breeze dropped further.

The handicap section went to Alcatel One Touch, skippered by 1996 JJ Giltinan champion Stephen Quigley, with his son Thomas Quigley and Sam Ellis in the crew.

Next Sunday, the Australian 18 Footers League will stage the first of its multi-race events.

The club’s usual spectator ferry will follow the races, leaving Double Bay Public Wharf, alongside the clubhouse and rigging area, at 2.15pm.