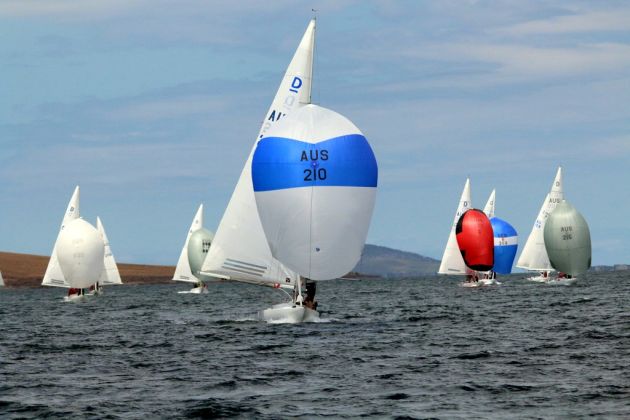 WA boat Linnea leading the fleet in an early race but had a shocker in the last race. Photo Angus Calvert.

Helming a one-design class keelboat such as an International Dragon in blustery winds south-westerly winds of 25 knots plus of wind and a choppy sea can be daunting for many skippers, but not for Prince Phillip winner Nick Rogers and runner-up, nearing 90-year-old Gordon Ingate.

There were several near ‘death rolls’ and broaches but not Tasmanian Rogers, at the helm of Karabos IX, or Ingate, steering Sydney entry Whimsical were always well in control of their boats.

Karabos IX had virtually won the Prince Philip Cup after Friday’s race, and would have confirmed victory by staying ashore yesterday. On the water, only a rare racing rules infringement could cost the Tasmanian crew a Cup victory.

Rogers chose to sail and sail he did, surfing downwind under spinnaker to win the last race by nearly two minutes from Allegra, skippered West Australian Geoff Totterdell, who finished 35 seconds ahead of 89-year-old Gordon Ingate, sailing Whimsical from Sydney.

Ingate, the defending Prince Philip Cup holder, has been sailing Dragons for about 60 of his 89 years, graduating from Vee Jays in Sydney’s Mosman Bay.

In a remarkable career, he has represented Australia as a helmsman in the Admiral’s Cup, America’s Cup and Olympic Games, has finished second overall in the Sydney Hobart race and contested world championships in International Dragon and 5.5 metre one-design yachts.

“I’ve just sailed ten races on the Derwent this past week and not got my feet wet once,” the former Admiral’s Cup, America’s Cup and Olympic helmsman grinned through a salt-encrusted face, praising the consistent sailing of Rogers.

Karabos IX finished with a net 8 points, giving Nick Rogers his 11th Prince Philip Cup victory since 1959, plus one as crew for Gordon Ingate.

Whimsical fought back from fourth place mid-race to take third place in the final race and end up second on a net 15 points, just one point ahead of Linnea, skippered by West Australian Sandy Anderson, the only woman to have won the Prince Philip Cup.

Linnea had its worst race of the regatta, finished 10th after caught in an in windless ‘hole’ on the first spinnaker run. Fourth placed Ridgeway (Steven Shield) also had a forgettable day.