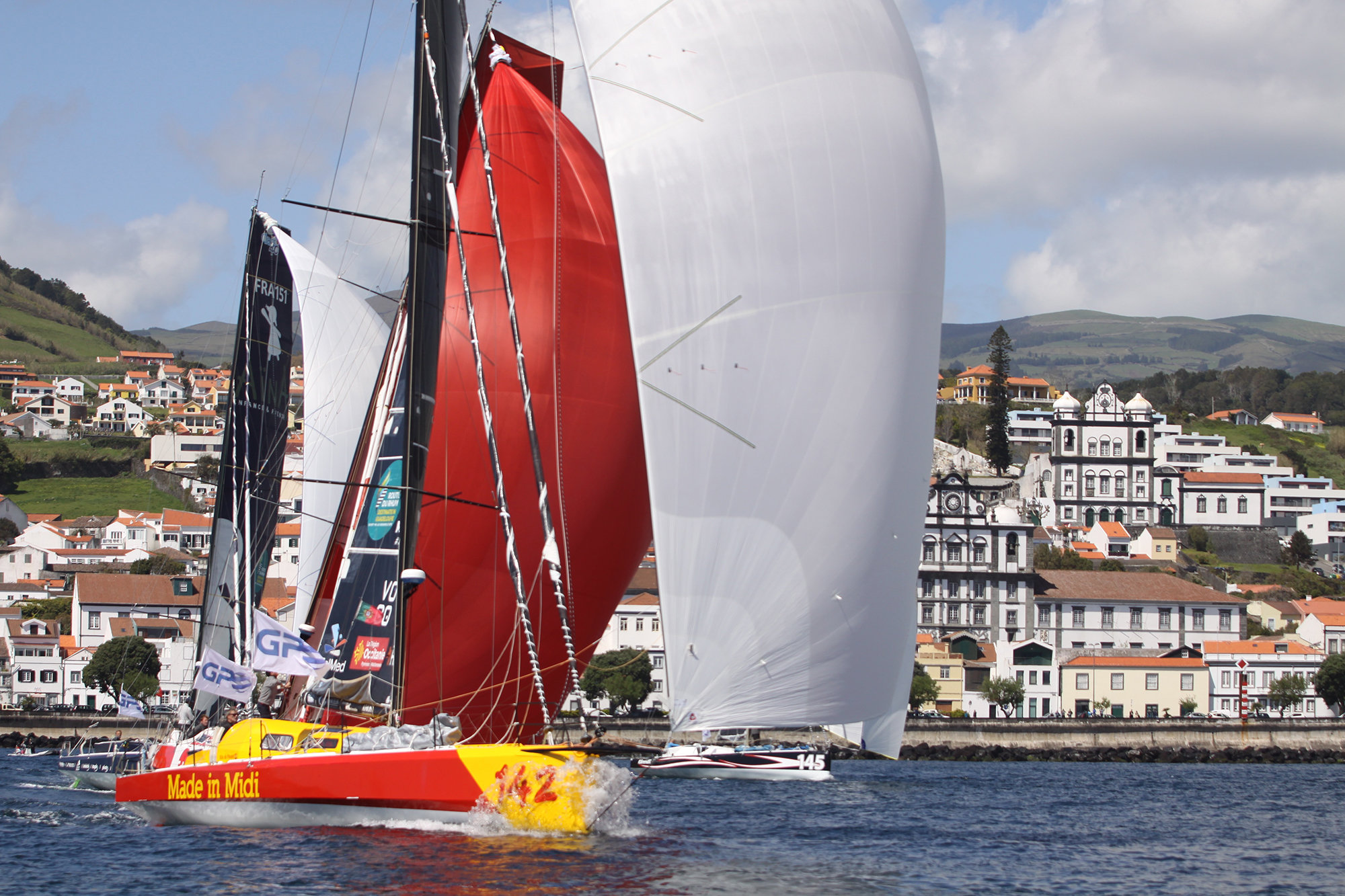 It was exactly 3 pm yesterday when the 10 Class40s taking part in the Défi Atlantique left the port of Horta on the way to La Rochelle 1,300 miles away. The 32* sailors setting out in a crews of two and even up to four, according to the skipper’s goodwill, hailed the admirable way in which the small port of the island of Faial and the Azoreans had welcomed them, always traditionally a sign of friendship and conviviality.

The race committee, under the presidency of Patrick Morin, had placed the starting line between the two ends of the jetty in the commercial port, next to the promenades that surround the port beneath the majestic Pico volcano. It was Kito de Pavant’s Made in Midi that was fast off the line, racing ahead of Emmanuel Le Roch’s Edenred, and Aymeric Chappelier’s Aïna Enfance et avenir.

A podium that is still relatively open

After the long leg between Guadeloupe and Horta, which resulted in an extremely complicated regatta more than 2,500 miles, because of having to bypass the Azores low pressure system and the North Atlantic depressions, the second leg of the Défi Atlantique, initially appeared to promise great suspense as to the outcome of the general ranking.

Aïna Enfance et avenir seemed to have a comfortable lead of almost 9 hours on its heir apparent Earendil with Catherine Pourre, and more than 24 hours on Kito De Pavant (Made in Midi), the third to arrive in Horta. Nevertheless, in view of the more than uncertain weather conditions at the end of the route, this morning again, none of the competitors were prepared to make any predictions. Indeed, the atmosphere was that of maximum concentration on the departure jetties for each of the 10 competitors in the race.

Each Class40 has its own game to play and its own objective to achieve, for a place in the general ranking, such as Enel Green Power’s Italians, who are well decided to challenge right up to the finish line, or for the best performance possible throughout the very fast 1,300 miles that lie ahead of them.

Aymeric Chappelier, an inhabitant of La Rochelle, is forgetting his domination in the general ranking for a short moment in order to focus solely on his goal of being the first into the port as the winner in his beloved town. No need to explain that both Earendlil, with its ocean-racing and Class40 champions, such as Antoinie Carpentier and Pietro Luciani, and the ace Kito De Pavant – Alex Pella crew aboard Made in Midi, do not intend to allow Chappellier this privilege.

The spirit of revenge and perfection drives the entire fleet. A fleet comprising 10 vessels which could, depending on the weather, if by chance the wind dropped in the Gulf of Gascony, see the addition of Loïc Féquet and his crew for the end of the race.

As you will remember, their Class40 Tibco was diverted to Bermuda shortly after leaving Guadeloupe in order to repair damage to the rudder blades. It has been sailing flat out since then to reach Horta, which it should manage to do by the middle of tomorrow night.

Loïc Féquet intends to make an express “pit stop” there in order to pick up fresh food and set out, this time on a race, to La Rochelle. It will be 11 vessels that will be arriving in the town which is preparing to welcome them with great ceremony on Saturday or Sunday.

* Last minute: Catherine Pourre will not be sailing in the second stage. For professional reasons, she is returning to France, leaving the boat in the hands of the Italian Pietro Luciani.

“We’re going to try to use the same strategy, namely setting out ahead, accelerating and remaining in front in order to be sure that this is not where we will be caught out! I already said it before even leaving for the first leg: the aim for us is to arrive home in the lead! I really get the feeling that the others don’t want me to do the same thing again. I can feel that they are slightly annoyed and that they are kind of on edge for this second leg.

“We’re going to start with a small oceanic ridge with a little wind inside, but a low pressure system is going to hit us very quickly. The wind will increase gradually to 25 knots with gusts of 30. We’ll be carried along so the route to Cap Finisterre should be relatively quick. However, afterwards, things are more uncertain because of a little bubble. In short, at the start, the strategy will be quite simple because we're going to head north and jib when the barometer starts to drop.

“In the Gulf of Gascony, things may become more complex with some variations and, as a result, an elastic effect. We will have to be fresh and lucid right through to the end. And, of course, in the lead!”.

“Our start to the race was hard work but we made a good comeback. It’s a pleasure to meet new sailors, especially Ambroggio Beccaria. I learned a great deal from this crew. “We are “only” ten hours behind Aïna, so we can hope, especially if the arrival is fought out with little wind. We also have an advance on the third crew.”

Kito De Pavant (Made in Midi) – 3rd in Horta

”We expect the Gulf of Gascony to be complicated. The leg is going to experience a strong downwind! It’s going to be fast but hard. We going to try to choose a good route and stay on the podium. It will be difficult to win places and very easy to lose some. We will continue to sail two-handed with Alex, which works very well. I like the format of this race which offers crews a great deal of freedom. Alex offers a different culture, another way of seeing ocean racing. He has many qualities, and that’s why he is seen on all types of vessels. He offers something fresh, positive, and is extremely competent. He allows me to work on preparing the Transat Jacques Vabre. “

“We are looking forward to arriving in La Rochelle. We feel a positive pressure from our 4th position. We want to do well. We're ambitious!! Why not a place on the podium? It’s going to be fast, with fewer tactics. The angles are very open and, therefore, less favourable for new boats. The atmosphere aboard is great, but we have been very strong mentally. I knew that the boat could work, but single-handed it’s more difficult, whereas with a crew you can really get the best out of the boat. Third place is not that far away.”