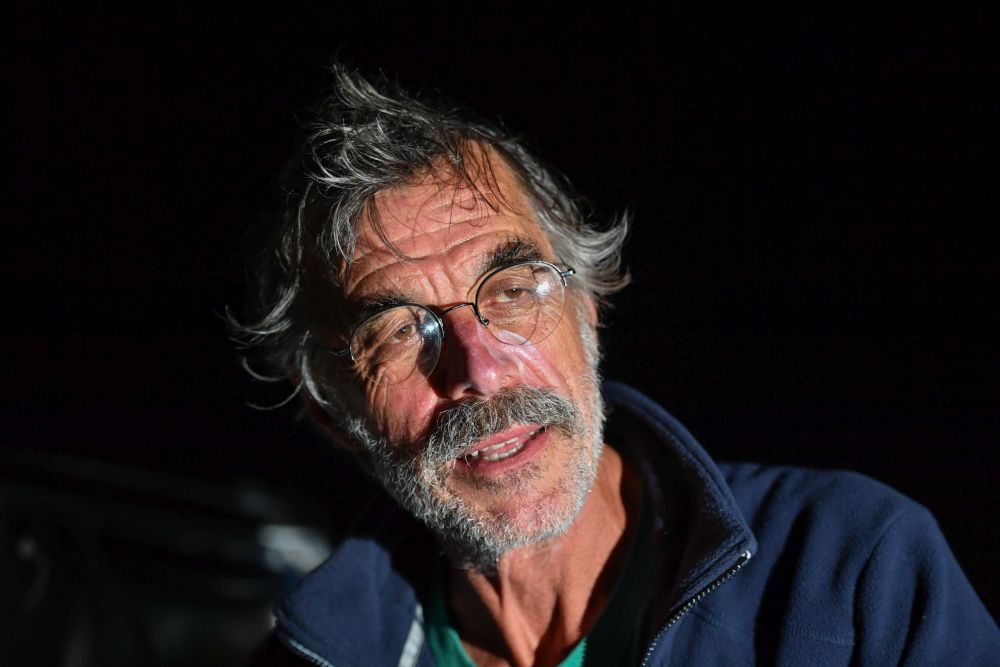 At 18:27 UTC on Saturday 20th Oct. the Joint Rescue Coordination Centre at Canberra (JRCC Aus.) picked up a distress beacon alert from French solo skipper Loïc Lepage.  They had already been alerted by GGR organisers that his yacht Laaland had been dismasted and was taking in water some 600 miles SW of Perth, Western Australia, and took on responsibility for coordinating a rescue mission.

JRCC issued an immediate MAYDAY relay to all shipping and at 20:30 UTC, a Challenger aircraft was despatched from Perth with a droppable pump onboard to assess the situation and photograph the disabled yacht. The plane arrived on scene at 23:09 UTC and raised communications with Lepage via VHF radio. Loïc advised that he was conducting repairs to his engine and did not require the pump or any other supplies to be dropped. He also stated that water ingress was at a rate of approximately 160 litres per hour but that the onboard pumps were keeping up. The aircraft reported that the mast did not appear to be attached to the vessel, and that no other significant external damage was visible.

Throughout this period, JRCC Aus. continued to seek assistance from merchant shipping, while GGR Organisers sort to communicated with other sailing vessels in the region. Due to the severe conditions, two merchant ships advised that they were unable to assist for safety reasons.

At 00:28 UTC, an RAAF P8 search and rescue plane was tasked to overfly the area and later a civilian aircraft was relocated from Sydney to Perth to provide back-up. The Maritime Services vessel Stoker has also been placed on stand-by.

At 01:22 UTC Francis Tolan, the skipper of the S/V Alizes II, a Beneteau Ocean 43 participating in the Long Route solo circumnavigation, positioned some 300 miles NW of Laaland’s position, offered his assistance.  Then at 03:14 UTC, the bulk carrier Shiosai, which had been heading west across the Great Australian Bight, also agreed to assist, and altered course towards the distress position.

At 05:07 UTC, GGR Organisers spoke to Lepage via satphone. The Frenchman advised that water ingress remained at the same rate, that the onboard pumps were keeping up, and that he was not in imminent danger of sinking. He also reported that the yacht’s engine, which had suffered some damage from water ingress into the boat, would not start, and that a jury rig had still to be set-up. Laaland continued to drift in the approximate position 38° 50.33’ S 104°15.27E, and that Loïc was seeking rescue and transfer off his vessel.

Lepage has since repaired his engine and been advised to motor in a northerly direction to shorten the distance between him and the rescue vessels. JRCC Aus. intends to utilise the MV Shiosai and SV Alizes II  as surface rescue assets and to keep Stoker on stand-by until Mon 22 Oct when a decision will be made based on a re-assessment of weather conditions and progress of Shiosai and Alizes II overnight.

In addition, an RAAF P8 search and rescue plane will fly direct from Learmonth to the distress position with an ETA of 00:30 UTC Monday. Two other planes have also been tasked to provide air overwatch as required from now until the completion of the operation.

The second placed Australian born Dutch skipper Mark Slats arrived at the BoatShed.com  Hobart film gate in daylight earlier today and took full advantage of the sunshine and warmth to dry out wet clothing and bedding and to check the rig of his Rustler 36 Ohpen Maverick.

Recalling his experiences across the South Indian Ocean, he said: “It was pretty rough, but I’m still going and the boat is in good shape, so I am happy. The Indian Ocean has been very hard and very painful a lot of the time. They say the Pacific is much better, so I am looking forward to that!”

Describing the storm that led to Indian Abhilash Tomy and Ireland’s Gregor McGuckin being rolled and dismasted, he said: “The seas were unbelievable, but the waves were horrific – up to 15 metres high. I copped one wave that broke over the back and filled the boat, and everything inside was wet.”

He thought he had been lucky with the weather, but then reminded himself – “I had 9 days of calms and then 5 days in a row of 40-50 knot head winds from the NE. That really got me down and I got pretty depressed…but then 10 minutes of good winds and speed and all was well again!”

When Mark set out with the GGR fleet from Les Sables d’Olonne on July 1st, he forgot to pack his gloves, but overcame this by wearing neoprene socks on his hands in bad weather and cutting up a jumper to make a pair of mittens to steer with.

“The worst damage has been to my electrics,” he conceded. “I have no way to monitor the batteries, no radio and no cassette players. I had two of these and two Walkmans but all have got wet. Only my VHF radio and AIS are still working.”

Last week, Mark thought he might have suffered a fractured rib when a toolbox flew across the cabin and hit him on the side during a knockdown. Today, this had all been forgotten. “Oh, it is not a problem. It only hurts a bit when I am lying down for any length of time.”

After 90 minutes, Slats rehoisted his sails and set off in pursuit of French race leader Jean-Luc Van Den Heede, now more than 2,000 miles closer to Cape Horn, the next big turning point.