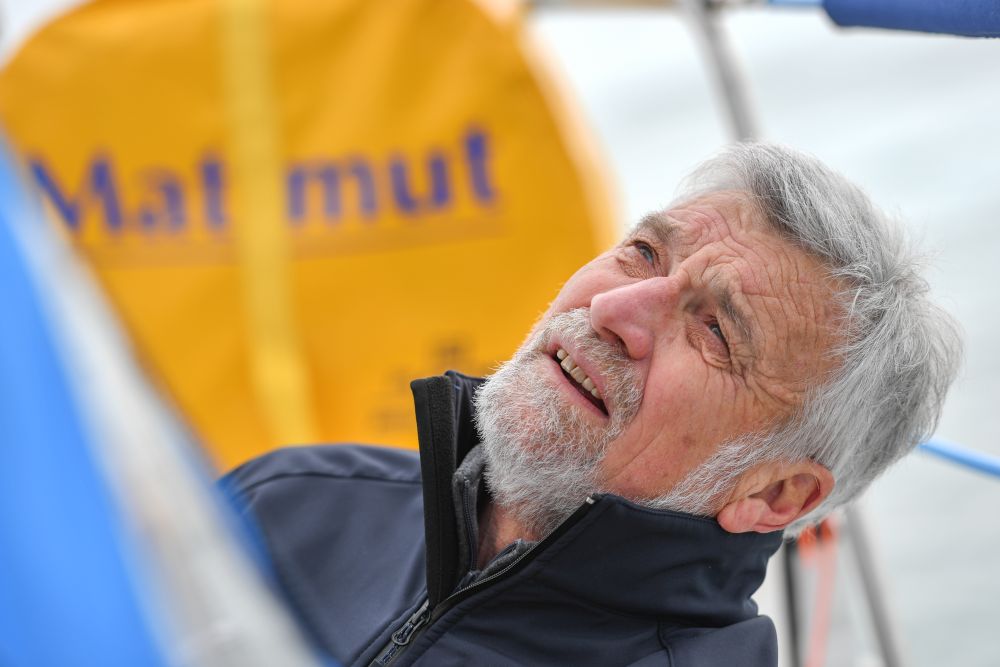 At 1500hrs UTC 5th NOV. Jean-Luc Van Den Heede called GGR Founder Don McIntyre to advise that his Rustler 36 Matmut had been knocked down badly to about 150° which had damaged the connecting bolt attachment to the mast that holds all four lower shrouds. The mast was not in danger of falling, but it was not securely tensioned. The bolt has slipped 5cm down in the mast section and slackened the rigging. He is still in the storm with 11 metre seas and 65knot winds. Conditions are expected to moderate in the next few hours.

The 73-year old Frenchman from Les Sables d'Olonne is now running downwind with no sails until conditions improve. He will then effect a repair that will allow him to hoist sail again and make for Valparaiso, Chile where he will make a permanent repair.

Jean Luc was not injured during the knock-down, has requested NO ASSISTANCE at this time and is confident he can make Valparaiso safely. This will mean that he will move to the Chichester Class once he makes that port to effect repairs.

This is NOT a CODE ORANGE situation for GGR and Jean-Luc is well in control of the situation. GGR will monitor his progress to port.

Istvan Kopar, the American/Hungarian GGR skipper sailing the Tradewind 35 Puffin gave a chilling account of the recent southern ocean storm to have swept the through the fleet as the mid-placed runners were attempting to reach or leave the compulsory BoatShed.com Hobart film drop in Storm Bay Tasmania.

“I am not happy in my ship, I can tell you!” Exclaimed an exhausted Kopar who had been forced to seek shelter off South Port beach, before continuing on around Tasmania’s South East Cape. Trying to make landfall during the height of the storm and find a safe anchorage at night was he said, “Brutal – The last four days have taken me to the bottom. I would have been much happier to have been offshore.”

He arrived at the Hobart stop without a radio, direction finder nor an accurate idea of time. “You really don’t know where you are and it was blowing a minimum of 50 knots. Right now, I’m more attracted to gardening than offshore sailing.”

Kopar blamed a lack of preparation for his poor start to the race. “I dropped to last place before I could work out how to fix my self-steering, and had never put my spinnaker up before the start – that first time was scary!”

“My main goal is to save the rig, save the boat and to arrive back at the finish. Right now, I feel closer to Joshua Slocum’s achievement (first to sail solo around the world in 1895-1898) than Robin Knox-Johnston’s (first to complete a solo non-stop circumnavigation and win the Sunday Times Golden Globe Race in 1968/69). I can’t even get a time signal – It’s not good. Everything is guesswork.”

Kopar’s ‘bad luck’ started with getting to grips with an unfamiliar wind vane self steering system at the start and extends to a rogue wave that washed out much his electronics and books, and flooded the main cabin with 300 litres of water. The last straw was a bird that attempted to land on his masthead wind vane, bending one of the arms into his VHF radio antennae and interrupting the signal.

He didn’t check his fresh water tank before the start and says now, “In Ghana they have cleaner water than I do.” He also added that the inside of his mould-ridden boat “is not healthy – not good at all.”

Could these situations be affecting his hands? “My nails are separating from the flesh. Cuts don’t bother me, but I’m scared about the state of my nails. They are black. I don’t know if it is caused by a fungal infection, the drinking water or the fungus inside the boat.”

He bemoans chasing across the Atlantic to get to the start on time, rather than focusing on getting to know his boat. But still smiling, he added more positively. “Now I am on catch-up and would like to catch up with Susie Goodall in fourth place – I gave my word to her mother before the start that I would look after her!” He joked.

There is certainly a race now, not for fourth, but to capture a podium position at the finish back in Les Sables d’Olonne. Kopar, Goodall and even sixth placed Tapio Lehtinen, due to reach Hobart tomorrow (Tuesday), all have eyes on Estonian Uku Randmaa and his struggle to maintain pace with his barnacle-encrusted yacht One and All.

4,000 miles ahead of this group, Race leader Jean-Luc Van Den Heede is currently facing what my become one of his biggest tests so far. In a 2-minute conversation with Race HQ in Les Sables d’Olonne today he spoke about 65knot winds and 11 metre seas. But at least he is now within 1,900 miles of Cape Horn, which the Frenchman expects to round on November 21st.

Contrast this with the performance of last placed runners Australian Mark Sinclair and Russian Igor Zaretskiy, now a whole ocean apart from Jean-Luc’s Rustler 36 Matmut. Zaretskiy, who has had his problems fixing a broken forestay and suffering hand sores, has chalked up an average VMG of just 2.1knots over the past two months.

Sinclair is clearly getting much more enjoyment from his solitude, but still, his average VMG over the same period is only 2.3knots. Last week he took time out to track down and photograph Gregor McGuckin’s abandoned yacht Hanley Energy Endurance. “Still afloat and emitting an AIS signal” he reported to Race HQ. Sinclair expects to reach the Boatshed.com Hobart film gate on Saturday December 8. By then both Van Den Heede and second placed Dutchman Mark Slats (Ohpen Maverick) are likely to have rounded Cape Horn and heading north up the Atlantic.