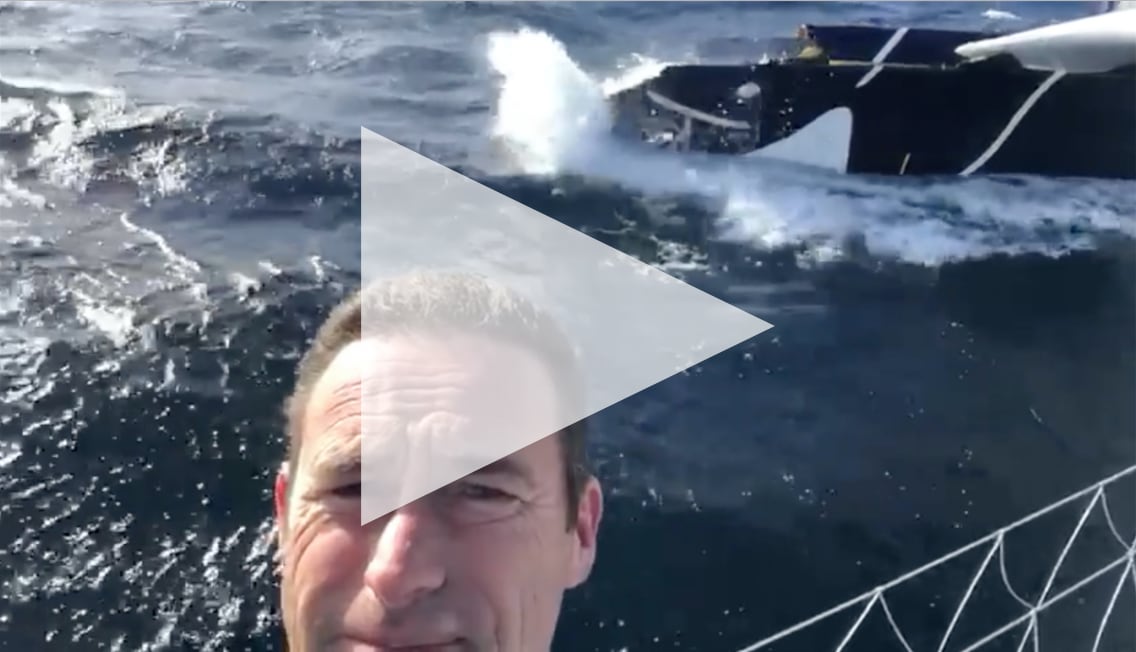 Shortly after 4:30 GMT, Sébastien Josse alerted his team manager to major damage aboard the Maxi Edmond de Rothschild. Leading the Route du Rhum – Destination Guadeloupe fleet after an outstanding start to the race, the solo sailor came to a violent halt.

Immediately up on deck, he observed that he’d lost part of the bow of his starboard float. It is night time in the area and given the sea state – nearly 4.5 metres of swell – and wind – 30 knots of northerly – it’s difficult to gauge the extent of the damage for now.

Sébastien Josse is safe and sound and together with his shore team and his routing cell he’s currently looking for a solution to make terra firma as quickly as possible.

Indeed, the most important thing right now is to get the sailor to shelter as a new low pressure system will sweep across the Bay of Biscay over the coming hours.

8 to 10-metre section of bow broken off

At 04:38 GMT this Monday, Cyril Dardashti’s phone rang. Unfortunately, these nocturnal calls from the ocean are rarely harbingers of good news. Via satellite phone, Sébastien Josse alerted his team manager that his boat had suffered major damage, synonymous with the end of the race for the five-arrow racing stable.

“The starboard float has suffered extensive damage with nearly 8 metres missing from forward of the beam. Sébastien set off pretty carefully and he was on track with the timing organised with his routing cell. These boats are quick, the speeds are always impressive, but the race rhythm was controlled. There were no technical issues aboard and Sébastien had just had a nap… He was in good form and ready for the next stage of the programme.”

The Maxi Edmond de Rothschild expected into Spain this evening

Very soon after the damage was announced, the shore team got together in Lorient at Gitana’s base. Working with the weather cell, which are in constant contact with the boat, Cyril Dardashti and Pierre Tissier, the team’s technical director, got operations underway to recover the sailor and his boat.

“Our primary concern is the sailor. Once we know that he’s okay we take care of the boat. In this instance, Sébastien was fine and had a very clear idea with regards to what action needed to be taken. Indeed, he had taken all the necessary measures to slow the boat down and had reduced the sail area down to the second reef to make La Coruña in complete safety, as the seas are still heavy, with waves of between 4 and 5 metres, and 30 knots of breeze. As such, it’s important to be relatively careful. The aim is to avoid the low pressure system, which will beef up in the area on Tuesday morning.”

Two members of the shore team hit the road to the north-west tip of Spain this morning and, by midway through the afternoon, the rest of the team were in position in La Coruña to prepare for the arrival of the Maxi and her skipper.

Safety before the explanations

“Of course it’s very hard… there is a massive sense of disappointment both for Sébastien and for the team and exiting a race prematurely when you’ve prepared so hard for it is never easy to accept, especially when you hold all the cards to post a solid performance. However, today our one and only concern is to get Sébastien and the Maxi nicely protected before the arrival of a big low pressure system set to sweep across the Bay of Biscay and the North-West of the Iberian peninsula tomorrow morning.

“There is no immediate danger, even though there are heavy seas, but the boat is no longer as balanced or manoeuvrable and the damaged float has taken on a lot of water, which has added a few tonnes to the platform… Why has this come about and what exactly happened? We can honestly say that we don’t think there was a collision with a floating object. It is the windward float that has gone. For now, we don’t have an explanation. However, we’ll have the time to analyse it all at a later date,” concluded Cyril Dardashti.

Given the extent of the damage, the Maxi Edmond de Rothschild’s retirement from the Route du Rhum – Destination Guadeloupe is no more than a question of administrative formalities, which will be dealt with once the boat and the skipper have made it back to terra firma.