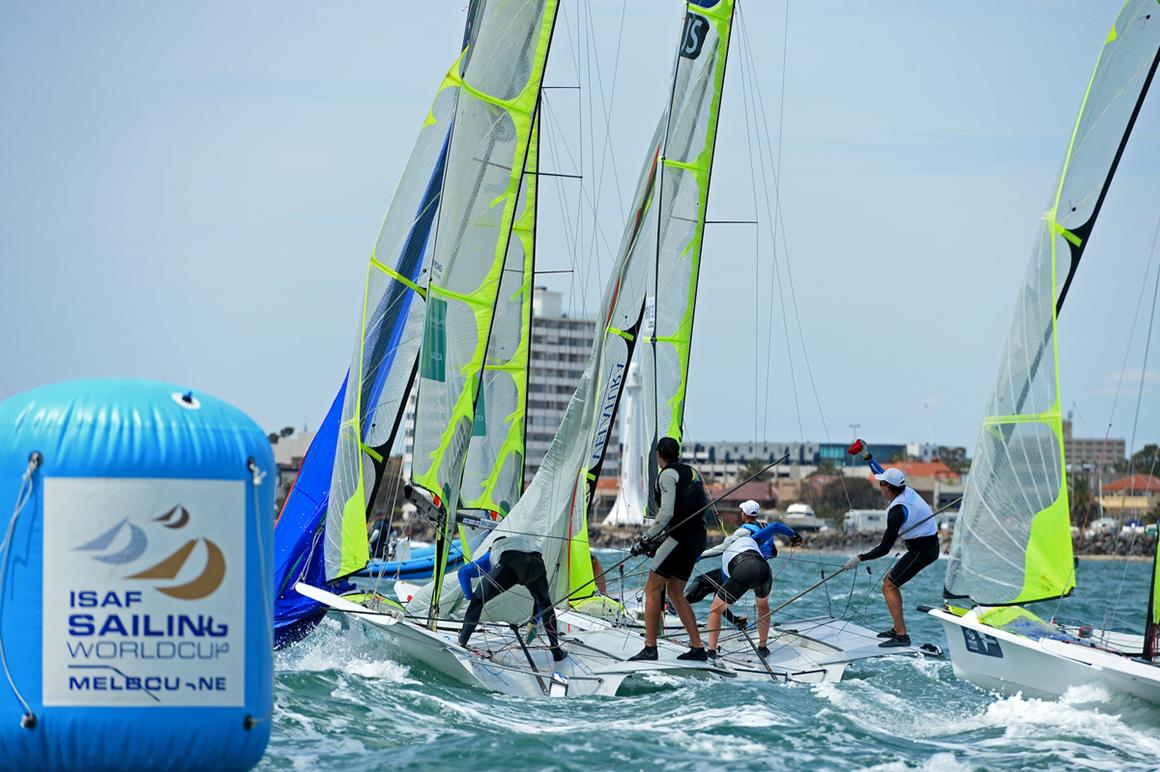 St Kilda’s usual foreshore and beach buzz on a warm summer Sunday grew louder when the Sailing World Cup Melbourne reached its peak. Eight Olympic classes peeled off their Medal Race one by one straight off the main beach, St Kilda Baths and pier, to the delight of visitors and sailors whose competition had already concluded.

Light morning northerlies moved around to the local sea breeze then tried to settle, swinging between south-east and south. By the time the men’s 49er skiff teams went hunting gold at 14:30, 15 knots was the reading on the track, the most finals day would deliver.

Event director Mark Turnbull OAM and Sydney 2000 sailing gold medallist, dashing between his various responsibilities around the St Kilda sailing precinct, took time to assess the popularity of the final day’s events. “We’ve got big crowds, plus the sailors are really happy, but importantly there are non-sailors everywhere; it’s the general public getting close to the action which is brilliant and one of the reasons why we brought sailing to the people this year.”

World Sailing’s Technical Delegate Antonio González de la Madrid Rodriguez agreed racing out of St Kilda put the sport front and centre. “We saw this today with St Kilda beach packed and the pier bustling. Melbourne is the start of the 2016 Sailing World Cup series and the journey to the Rio 2016 Olympic Games is well and truly on!”

The winner of each Olympic class at the World Cup also qualifies for the 2016 Sailing World Cup Final in Abu Dhabi in November 2016.

Organisers acknowledge major partners, the state government of Victoria under the Melbourne banner, City of Port Phillip through its St Kilda tourism brand, St Kilda Sea Baths and Mercedes Benz Brighton. Each Sailing World Cup medallist was fortunate enough to be presented with a pair of Bolle sunglasses.

Josip Olujic (CRO) and Oliver Tweddell (AUS) are close friends, but this didn’t hinder their battle for double points, the series trophy and an invitation to the Sailing World Cup Final.  The start of their Medal Race was dramatic with both sailors OCS. Tweddell was first to return, quickly taking and then holding control of the race to finish up on the right side of the series countback split.

“It’s pretty nice to finally win on home waters, I think I’ve come second here four in a row,” Tweddell said. His has a big season ahead starting with the European Championships in March in Barcelona, one of several events that will earn the Melbournian points towards selection to the Australian Team for the Olympic Games.

There were three teams in the Medal Race, all equal in skill and determination. When it came to the final double-point race, the dying seconds decided the ultimate victor.

The finish was so tight even Australian’s Tess Lloyd and Caitlin Elks weren’t sure if it was them or Erica Dawson and Ellie Copeland (NZL) who finished second and therefore top scorer at the end of their gruelling five-day series. The Australian clawback from last secured them the World Cup gold medal and an invitation to next year’s Grand Final.

“At the start we got a little mixed up with what was happening with the wind and didn’t make the best choices on the course. Unfortunately that put us behind on the first leg and it was just catch up from there,” Elks said. “We both said anything can happen and we have lots to play for.”

“The biggest thing was the decision at the end around the bottom mark, whether to hold the kite or drop it,” Lloyd added. “We were behind so it was pretty much the only thing we could do and we just made it.”

Kiwi’s Logan Dunning Beck and Jack Simpson performed strongly in the “brutally shifty” penultimate day to set them up for the gold medal position and first international team to finish atop the Medal Race podium. “It’s a great feeling sticking it to the Aussies,” Dunning Beck admitted with a cheeky grin.

Brothers Will and Sam Phillips finished second overall and first Australian team, just one point in front of countrymen David Gilmour and Rhys Mara who led the skiff pack early in the week and ended up third in the 10 boat fleet.

To the end twin brothers Alexander and Patrick Conway (AUS) remained untouchable, determined to achieve the perfect tally even though their overall win was already locked in.

“We are happy with the result because our series was about being consistent in all conditions,” Patrick said. “The lessons from this event are for us to trust our speed and our decisions on the race course. We know what we are doing is working; now we need to keep the momentum going.”

The Conways will return to training in Sydney for the next two months before they head to Argentina for the 470 World Championships.

“Sailing in a small fleet was tricky, you have to work a little bit harder to keep your top position,” Smith said. “We are learning to work at the top of the fleet and being a team, plus risk management.”

“We’ve had a pretty tough year with illness that kept us out of the boat for a while,” Ryan added.

Joanna Sterling won the RS:X gold medal after a near-perfect series. In second overall was Audrey Yong (SIN) who comfortably stayed ahead of Lara O’Brien (AUS).

Sterling put her win down to working very hard on her fitness in the lead-up. “I did a month solid of fitness training before this event and this allowed me to work harder.”

Sterling enjoyed the interaction with the public in the St Kilda sailing precinct, the first time in seven years the vibrant suburb has hosted the World Cup on behalf of the governing body, World Sailing. “Everybody has been so much more involved in the racing. It’s been great as an athlete having people come up and ask you questions.”

Sterling is seeking to fill the Olympic spot she secured for Australia when she qualified the country for Rio in the women’s windsurfer class.

“I didn’t have too much pressure but I still wanted to go out and have a good race, and get the fundamentals right,” Cheng commented. “Everyone had up and down races and I was able to have a good buffer after stringing some good races together. Every single race all week was difficult.”

Australian Sailing’s Ashley Stoddart straightforwardly beat New Zealand’s Susannah Pyatt over the eight race series. “I just came back from our worlds a week ago so I was tired but warmed-up,” the gold medallist said. “I enjoyed the variety of conditions and it’s been cool having the final day where people could have a nosey.”

Like his inaugural Sailing World Cup Melbourne, Florian Gruber’s (GER) fourth time ended with champagne spraying standing taller on the dais than his challengers. “I always enjoy the Australian lifestyle, pretty relaxed and super friendly people and I always have great experience at this event,” the gold medal winner said.

He hopes today’s win will be his last in the race board class and talked openly at the medal presentation of his vision for the foil board. “Foiling is the future; it’s the fastest thing on the water. Let’s see what the decision is for the 2020 Olympics, if it’s the race board I’ll be back in Melbourne on a race board.”
Martin Dolenc (CRO) finished second and Ric Black (AUS) third.

Sailors will now turn their focus to the 2016 Sailing World Cup Miami which takes place at the end of January 2016.