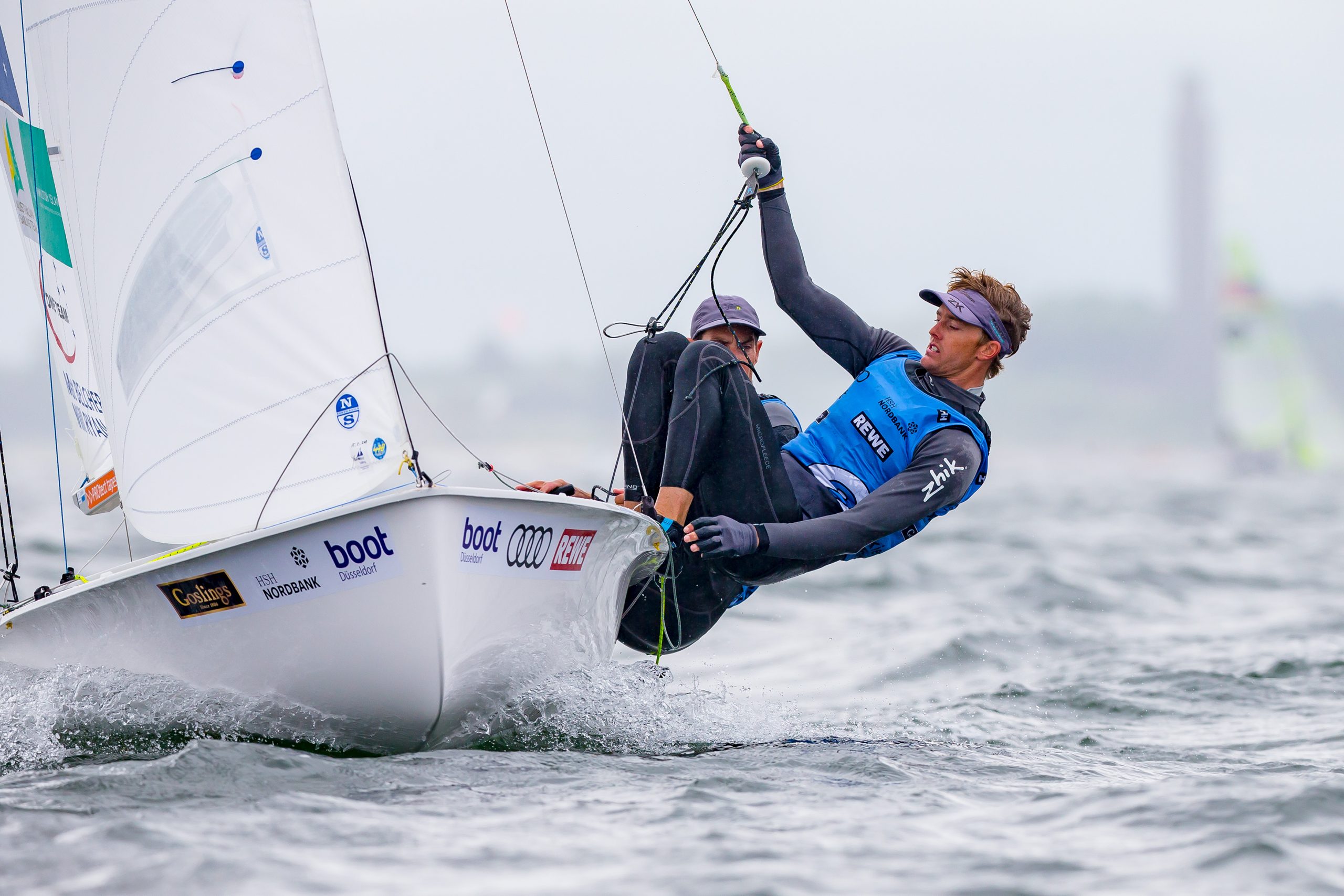 The final day of Kieler Woche brought plenty of drama as multiple Medal Races played out across the Olympic classes.

Laser Men
Elliot Hanson of Great Britain let gold slip through his fingers as he finished 9th in the Medal Race. Arch rival Philipp Buhl wasn’t having a great race either but was gifted a vital place just before the finish when Estonia’s Karl-Martin Rammo was made to do a 360 penalty for a Rule 42 kinetics infringement. Buhl overtook the Estonian and crossed the finish in 7th place, the German from Kiel taking his fifth Kieler Woche gold by a single point from Hanson. Bronze went to Croatia’s Filip Jurišic.

Laser Radial
After dominating qualification with a perfect string of bullets, the wheels fell off Maxime Jonker’s campaign in the latter stages. Today the Dutch sailor finished last in the Medal Race, leaving her the wrong side of a tie-break for bronze which went in favour of Sweden’s Josefin Olsson. The Rio 2016 Olympic bronze medallist Anne Marie Rindom won the Medal Race and secured gold for Denmark. Norway’s Line Flem Höst took silver.

Queenslander Mara Stransky was the best of the Australian contingent, finishing 14th in a huge field of 76.

Nacra 17
John Gimson and Anna Burnet clung on to gold by the skin of their teeth as the Brits raced to 6th across the line in the Medal Race. Jason Waterhouse and Lisa Darmanin finished ahead in 3rd but needed another place between themselves the Brits if they were to take the win. Instead the Aussies had to settle for silver just 1 point behind Gimson and Burnet. It was also a tight tussle for bronze with Thomas Zajac and Barbara Matz doing just enough to get third place by a point from Gemma Jones and Jason Saunders of New Zealand.

Nathan and Haylee Outteridge had a good first regatta together, winning a race, finishing top three in three others and taking fifth in the medal race. A DSQ and DNC spoiled their scorecard but they finished in ninth place overall.

Finn
Rio 2016 Olympic bronze medallist Caleb Paine won the Finn Medal Race but the American wasn’t in the hunt for a medal today. A fourth place for Josh Junior was sufficient to seal gold for the New Zealander while a second place lifted Norway’s Anders Pedersen to silver. Great Britain’s Ed Wright could only manage eighth in the race, dropping the European Champion to bronze; New Zealander Andy Maloney just missed out on a medal, finishing four points behind Wright.

Jake Lilley was the best of the Australians in eighth place.

470 Men
Anton Dahlberg and Fredrik Bergström have made their mark on the 470 fleet this season with victories at the European Championships and the Sailing World Cup in Hyères. Today the Swedes went into the Medal Race with a small three-point advantage over the all-conquering Australians, Mat Belcher and Will Ryan. However, the Swedes had a poor race, finishing in 8th place, their worst score of the week. Meanwhile the Aussies rose to the occasion, winning the Medal Race and taking the gold. The Swedes had to settle for silver while in the battle for bronze, France’s Kevin Peponnet and Jeremie Mion just got the better of Luke Patience and Chris Grube of Great Britain.

470 Women
Maria Bozi and Rafailina Klonaridou of Greece were in the driving seat going into the 470 Women’s Medal Race but the experience of Silvia Mas and Patricia Cantero shone through, with the Spanish team winning the race and taking the gold. The Greeks had to be satisfied with silver while bronze went to the best of the German crews, Nadine Böhm and Ann-Christin Goliaß. Australians Nia Jerwood and Monique de Vries finished 12th.

49er Men
Mathieu Frei and Noe Delpech did all they could to secure a medal, the French team winning the Medal Race. However it wasn’t quite enough as a fifth place was just enough for Lukasz Przybytek and Pawel Kolodzinski to secure bronze for Poland. Olympic Champion of 2008, Jonas Warrer crewed by Jakob Jensen, sailed a solid week and wrapped up gold, with the Spanish brothers and class veterans, Federico/ Arturo Alonso taking the silver.

49erFX Women
Victory in the Medal Race very nearly brought Sophie Weguelin and Sophie Ainsworth a 49erFX medal, but the Brits missed out on bronze by a single point. Sweden’s Julia Gross and Hanna Klinga finished 3rd and were not far off the silver medal won by Germany’s Tina Lutz and Susann Beucke. A second place in the Medal Race brought a comfortable gold for Alex Maloney and Molly Meech, the Rio 2016 Olympic silver medallists.

In non-Olympic classes, Zac Littlewood (Australia) defended his leading position in the overall ranking and is the new World Champion in the Laser Radial. He went into the last races relaxed. “I am here to learn and win races”, he said. In the second race he realised: “I am the World Champion. That is crazy.”