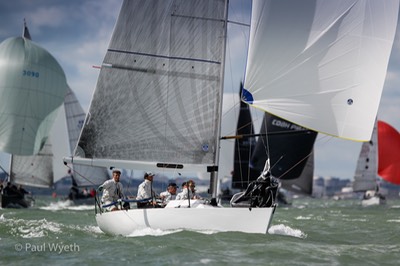 Sadly, the wind gods refused to smile on the final day of the Quarter Ton Cup off Cowes and no racing was possible after the race committee went afloat early to monitor conditions, but held the fleet ashore at Cowes Yacht Haven.

Sadly by 13.15 hours, it was clear that there was no hope of wind before the 14.30 final start cut off time and so Race Officer Rob Lamb made the inevitable decision.

Despite the lack of a final race the regatta was declared a resounding success by the competitors with eight exceptionally close races being run over two days. By a six-point margin the 2018 Quarter Ton Cup winner if confirmed as reigning champion Aquila, designed by Rolf Vrolijk, owned and helmed by Sam Laidlaw and crewed by Brett Aarons, Gareth Fowler, Tom Forrester-Coles and Robbie Southwell.

In accepting the Quarter Ton Cup Sam Laidlaw paid tribute to his crew and to his fellow competitors, and in particular thanked Class Secretary Louise Morton for not only organising a fantastic regatta, but for also providing them with such great competition. He also thanked Rob Gray who had played a pivotal role in encouraging him into the Quarter Tonners.

Louise Morton and her all girl crew of Lucy Macgregor, Kate Macgregor, Susie Russell, Vicky Lenz and Bethan Carden aboard the 1978 Fauroux designed Bullet took third place overall and also claimed the Coutts Trophy for the boat with the most race wins, thanks to their three conquests on the opening day.

In the Corinthian Division for all amateur crews Pierre Paris’s Pinguin Playboy, designed in 1979 by Fauroux and crewed this week by Jerome Herbert, Rodolphe Deschamps, Benoit Duchemin and Baptiste Touzard, claimed the Corinthian Quarter Ton Cup Trophy for an incredible fifth time. This wonderful group of friends sails over from Le Havre each year to compete and is terrific international ambassadors for the class.

Second place in the Corinthian Division went to the 1980 Quarter Ton Cup winner Hellaby, which was designed by Laurie Davidson and this week has been crewed by helmsman Simon Smith, owner Rob Stewart, Nick Young, Alistair Blair and Barry Shotton from the Medway.

The Corinthian podium is completed by the 1974 Norlin designed Olivia Anne VI, owned by Jan Thirkettle and crewed by Matt Perkins, Maria Perkins, Ewan Adams and Will Holden.

The regatta came to a delightful conclusion with the traditional Quarter Ton Cup Gala Dinner and Prize Giving, held in Cowes Yacht Haven Events Centre. Class Patron Bob Fisher was on hand to oversee proceedings and help present the prizes and as usual much merriment was had by all.

Alongside the racing prizes there was also the presentation of the traditional QTC special awards. 63 years young Jo Manser of Great Bear IV took home the Quarter Ton Walking Stick, which is awarded to the Oldest Bowman in the fleet.

Terence Dinmore, Dan Pearce, Ian Court, Jon Kilburn and Dave Green of Captain Moonlight won the Oldest Combined Crew Age prize with a combined age of 371 years, which averages out at just over 74 years young! At the opposite end of the spectrum Blackfun’s crew won the prize for the youngest team at the regatta with a combined age of just 154 years.

One of the biggest cheers of the evening was reserved for the presentation of the Marineware Concours d’Elegance Trophy which was awarded to the 1976 Stephen Jones designed Wings, owned by Berry Aarts.

Wings has looked particularly splendid this week in her striking orange livery and Bob Fisher was particularly proud to award the trophy personally as Wings is the boat which he skippered to fifth place in the 1978 Quarter Ton Cup in Japan. Berry and his team are long standing supporters of this regatta and their love of and pride in Wings are clear to see and make them hugely popular winners.