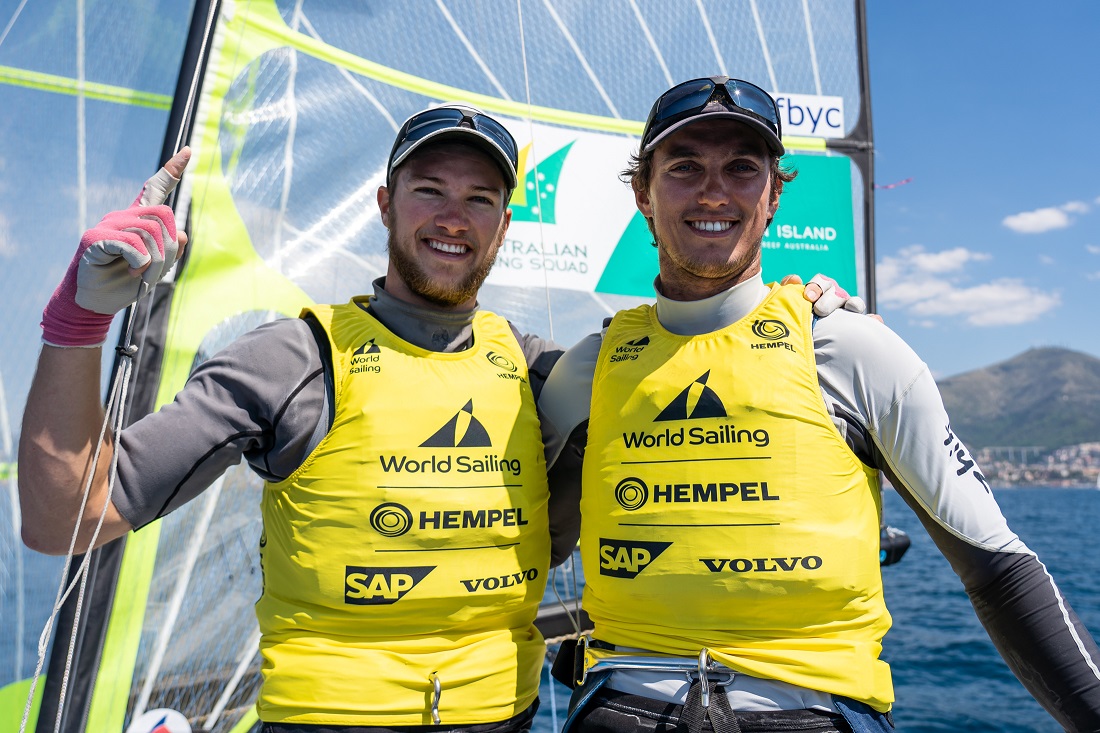 West Australian brothers David and Lachy Gilmour have won the 49er gold medal on Day 6 of the Hempel World Cup Series – Round 3, Genoa, after finishing fourth in the double points Medal Race.

The 49er race started at 11.40am local time and was sailed in a 5 to 6 knot fairly stable breeze. Lachy Gilmour described what unfolded: “We got off the start in poor shape, got rolled and had to tack twice before we got a clear lane.

“From there, we just sailed faster than everyone else. We sailed through the left pack and the right pack. We were just managing the boats around us. I kept asking Dave ‘are we good on points’? And he kept saying ‘yeah’. We finished fourth which gave us the gold medal.

This is by far the best international result for the brothers who joined forces last September for a shot at the 2020 Olympics. They sailed their new 49er in Genoa and are happy they have it up to speed.

Lachy: “It’s pretty unreal to come away with this result in the sort of fleet we were up against. We went into the day just wanting to do what we’ve been doing all week – just sail clean and fast. We just wanted to manage ourselves and not screw up anyone else’s race.

“It’s a massive confidence booster for us and the Australian squad environment too. I think all the skills are in place. It’s about putting it together when it comes time to race and to be consistent in training and racing,” he ended, saying they were looking forward to competing at the European 49er Championship at Weymouth in May.

On this penultimate day in Genoa, Italy, the other most inspiring result for the Australian Sailing Team was that of Mat Belcher and Will Ryan in the 470 Men’s. The pair enjoyed their best day with seventh and a win to rocket up the board from 27th into seventh place overall. They are 19 points off the lead, but are in close contact with the third to sixth placed boats.

Chris Charlwood and Josh Dawson slid down the leaderboard to 36th overall following 40th and 37th placings in what was an especially trying day for the 470’s.

Nia Jerwood and Monique de Vries posted mixed results of eighth and 22nd in the 470 Women’s, moving up the standings by two places to 24th overall.

Luke Elliot also made a big move up the standings, picking up 17 places to be 26th overall in the Laser Gold fleet, courtesy of a fourth in the only race of the day. Officials tried for more, but between General Recalls and a shifty breeze that dropped out to 1.4 knots, it was not possible.

The same problems occurred in the Laser Radial Gold fleet, where all three Australian sailors are, but they were able to put three races away. Mara Stransky is sixth overall, the best of the Australians. Apart from an 18th place today (used as her drop), she has otherwise sailed within the top seven throughout the Olympic classes regatta.

Zoe Thomson is next best placed in 24th overall, with Elyse Ainsworth dropping to 33rd overall; a disqualification in Race 5 not helping.

Tasmanian Jock Calvert is seventh overall in the Finn class. After sailing well all week, this was not his day after sailing to 15th and 16th places in the last two races.

General Recalls, the AP flag and abandonments due to unstable conditions, marred the day. Early on, winds were generally in the 6 and 8.5 knot range across the board, but by afternoon were frequently fluctuating between 1.2 and 12 knots.

The 470 Men’s and Women’s were the last boats standing when the wind increased to as much as 12 knots at 4.45pm, but it continued to pressure up and down and was shifty. When it depleted to 1.7 knots with the afternoon fading, officials were given no choice but to call off Race 7 for both fleets.

Life for on water officials and sailors alike has been anything but straightforward at this event.