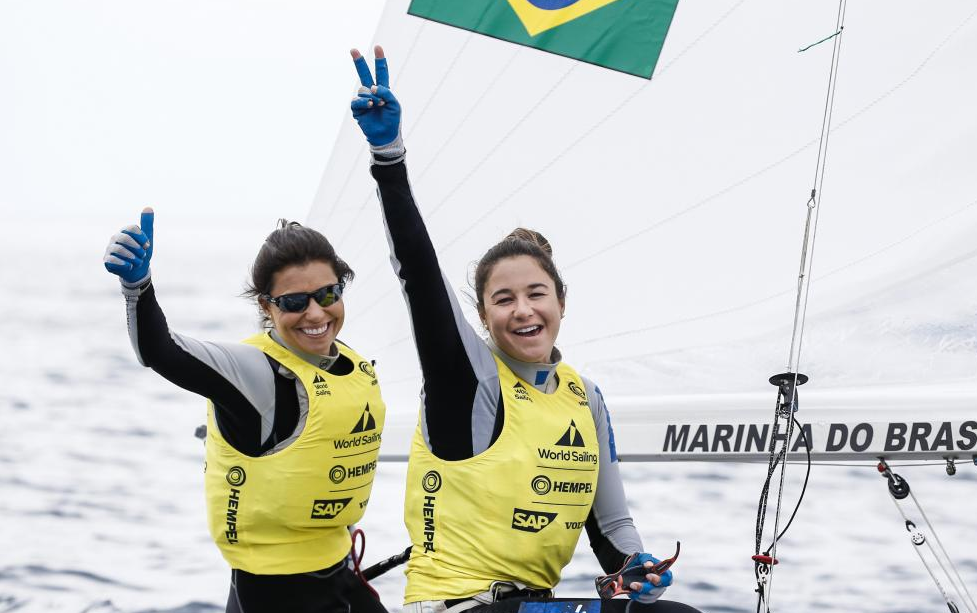 Fernanda Oliveira and Ana Luiza Barbachan clinched the Women’s 470 title for Brazil with their compatriot Jorge Zarif snapping up the Finn honours.

Genoa was hit with light winds all week long and Sunday’s action was no different. The wind was up and down for much of the day and although there were some delays, a veering north westerly 5-9 knot breeze ensured all five Medal Races were completed.

Genoa saved the most excitement for the final race of the week – the Laser Medal Race. As many as seven sailors had a realistic shot at claiming a medal but the advantage was with Pavlos Kontides (CYP) who held a six point lead going into the final battle.

Kontides found himself down the fleet early on in the race and the medals were swinging back and forth.

At one point, the sixth placed Andrew Lewis of Trinidad and Tobago held the lead which put him in gold medal position.

Hungary’s Vadnai saw Kontides towards the back and looked to advance in the middle of the pack. Meanwhile, Vadnai’s brother, Benjamin pushed ahead of Lewis which put Jonatan in the gold medal position.

The fleet was closely bunched all throughout the race and numerous penalties were dished out to the rocking which resulted in the positions constantly shuffling. Benjamin managed to keep Lewis at bay to take the race win.

Jonatan followed through in fifth with Kontides in eighth. This put Jonatan equal on points with the Cypriot and based on his better result in the Medal Race, he clinched gold.

Kontides was full of disappointment at the end of race having been made to settle for silver.

Lewis’ second place enabled him to jump into the bronze medal position handing him his, and his nations, first ever World Cup Series medal.

“I had a penalty at the beginning so it was all about how much I could catch up at the start,” said Jonatan. “I was almost sure that the penalty would take my medal away. Two years ago I had a penalty in the Medal Race in Kiel, finished last and finished fourth overall. I was a bit afraid it would happen again.”

“I’m training with Pavlos and others so it was a bit like training but we’re wearing the World Cup bibs and it’s about getting a medal so it was much tougher competing against him.

“We showed that Hungarian sailors are good in light winds. I’m happy for my brother and I am sure the whole family is proud.”

Six sailors were in with a shot of taking Laser Radial gold ahead of the Medal Race. Dongshuang Zhang (CHN) led overnight and was targeting back to back Hempel World Cup Series gold medals following her success in Miami.

Zhang and Karachaliou got disconnected from the pack early on and Rindom, Jayet and Høst advanced to the front. The predicted medal table was swinging back and forth but Rindom was able to maintain position at the front to put serious pressure on Zhang as she lingered at the back of the fleet.

Rindom sailed through in third and had a nervous wait for Zhang to finish. The Chinese racer came through in seventh which meant she took silver and Rindom clinched gold.

It could have been worse for Zhang as Jayet was in silver medal position at one point but was penalised for rocking so had to complete penalty turns which handed silver back to China. Jayet finished third in the Medal Race which was just enough for bronze as she ended up tied on points with Høst.

A battle was on the cards for the Finn Medal Race as Jorge Zarif (BRA) and Alex Muscat (ESP) were separated by two points. Whoever finished on top would take gold. The battle commenced ahead of the start as they engaged in a match race but Muscat escaped Zarif’s control and managed to put a gap between himself and the Brazilian.

As the race unfolded, the initiative swung back to Zarif as he commented, “There were very small differences. My idea was to start windward of him [Muscat]. I didn’t do very well but I managed to get a small right shift and then the most important part of the race was at the top where I bore away a lot and had to tack behind the fleet.

“I lost a few boat lengths. The Spanish guy tried to tack inside those boat lengths and in the end he got two penalties because of that.

“I then tried to control him and keep the lead.”

Zarif did exactly that, staying on top of the Spaniard. He came through in sixth with Muscat in ninth which meant gold went to Brazil and to Spain. Muscat’s compatriot Joan Cardona Mendez held off a late surge from early leader Oskari Muhonen (FIN) to take Bronze.

Every team in the Men’s 470 had a shot at taking a medal with the points close between the top ten racers.

The Kiwis were just three points off the Chinese and knew a strong performance would boost their chances at overturning the deficit.

Snow-Hansen and Willcox led at the top mark as the Chinese struggled at the back of the pack. At the front of the fleet, the Kiwis battled with the Swiss team and Japan’s Keiju Okada and Jumpei Hokazono. The Japanese managed to take the race win and were followed by the Swiss and the Kiwis.

The Chinese managed to work back up the pack but it was too little too late. Their fifth gave the Kiwis a one-point win as they settled for silver.

“That’s our first World Cup win so we’re really stoked,” said Snow-Hansen. “We were winning round the top mark so we were hoping it would pan out a little easier for us but then we were right in the mix of it [with the Japanese and Swiss].

“We only knew we had it in the bag only halfway through the last reach. The Chinese clawed back into it so it ended up being really tight.”

Although any one could have taken a medal, there was no change in the podium finishers as the Swiss teams second meant they held on to bronze.

The biggest movers were Japan’s Okada and Hokazono who climbed to fourth from tenth after their race win.

Fernanda Oliveira and Ana Luiza Barbachan (BRA) had gold confirmed ahead of the Women’s 470 Medal Race. Three consecutive race wins in the opening series gave them an unassailable lead.

They took third in the Medal Race and were delighted with how they sailed across the seven completed races, “It was an incredible week,” expressed Oliveira. “It was a very good week even though it was difficult with light winds and a lot of waiting. We managed it well. It seems that it’s [wind delays] our life. Sometimes you have to wait to sail in big winds and light winds.

“But if you have good results, you’ll enjoy any wind.”

Mathematically, eight teams could finish on the podium. Italian sailors Benedetta di Salle and Alessandra Dubbini, as well as Elena Berta and Bianca Caruso, held the podium positions going into the Medal Race.

China’s Mengxi Wei and Haiyan Gao started the day in sixth and jostled with Silvia Mas Depares and Patricia Cantero Reina (ESP) at the front of the pack.

The Chinese team claimed the race win and put themselves in prime position to move up onto the podium.

As Berta and Caruso struggled at the back of the pack in ninth position, a medal for them was a hard task so it was up to di Salle and Dubbini to fight the cause for the home nation.

Di Salle and Dubbini swayed between fourth and sixth place all race long but they crossed the line in fifth which meant they missed out on silver by a single point, handing it to the Chinese as the Italians settled for bronze.