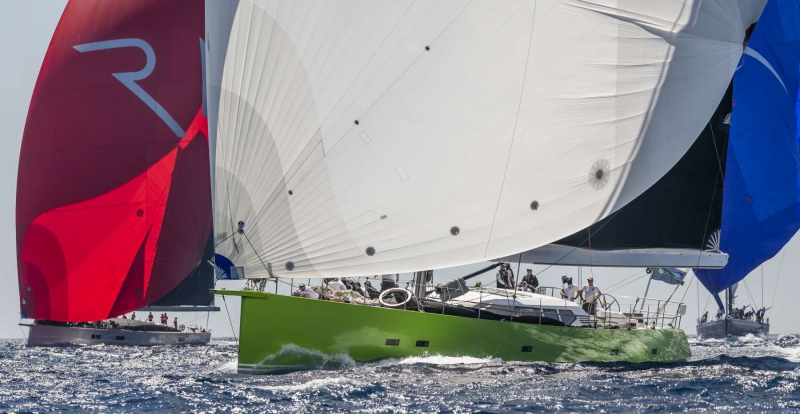 Porto Cervo, Italy. 5 June 2019. The second day of racing at the Loro Piana Superyacht Regatta, an event organised by the Yacht Club Costa Smeralda, was characterised by ideal wind conditions for big boat racing. Winds of 18 to 23 knots from the southeast allowed the fleet to give their best on a regatta course that was nothing short of spectacular.

For the first time in a superyacht regatta, the boats in the Performance division tested – with resounding success and a lot of adrenaline – a fleet start with a windward offset mark, instead of the usual staggered start which remained in place for the Cruising division. Jim Pugh of the Reichel-Pugh Yacht Design studio was on board Magic Carpet 3 and commented: “The fleet start today was really beautiful with ten superyachts on the same line. We are very happy to be here at this event in Porto Cervo, it's fantastic. When you have wind that intensifies from 18 knots up to 25 and you take on a course of approximately 30 nautical miles, you have all the elements for optimal racing conditions.”

The choice of the course by the Race Committee was indeed perfect, sending the Performance fleet to circumnavigate the islands of Caprera and La Maddalena counter clockwise, leaving a mark to port off the island of Barettinelli di Fuori before returning to Porto Cervo via Bomb Alley and the Bisce pass, covering a total distance of 30.5 miles.

The Cruising division sailed around Caprera and La Maddalena clockwise, leaving the islet of Barettini to port, a route of 24.3 miles. The spectacle of the two divisions coming together at the island of Spargi was unique, a dream scenario for anyone passionate about sailing. While the 50-metre Silencio, at the head of the Cruising fleet, rounded Punta Marginetto on La Maddalena, the gaff-rigged schooner Mariette of 1915, sailed with great skill ahead of Meteor and Q, met with the ultra-modern WallyCento Magic Carpet 3 leading the Performance fleet. On that section of the course the wind was blowing at 23 knots with gusts of 29 recorded at the top of the masts of the superyachts – a height of more than 50 metres.

Magic Carpet 3 repeated yesterday's success, chalking up another convincing victory, this time in front of Switzerland's 33-metre Inoui. Third place of the day went to the Wally Open Season, followed by Ribelle and Magic Blue, who finished on the same corrected time, a fairly rare occurrence which led to both being awarded the same average score. The provisional overall classification naturally sees Magic Carpet 3 in first place, followed by two more Wally yachts: Open Season and Magic Blue.

In the Cruising division the Perini Navi Silencio also gained her second win ahead of Mariette in second place. The 50-metre yachts Meteor and Q, who crossed the finish line in third and fourth place, treated spectators to an exciting battle of the giants throughout the race. Stephane Luca and Chris Main, respectively captain and tactician on board Inoui, commented: “For the first time the super-yachts started in the classic manner, on one line, and not individually as is usual, but it was a start that was completely safe for everyone. We started very well and this was the key for the day which, combined with perfect manoeuvres over the whole course, allowed us to get a great second place. We are happy with today's result and to be here racing in Porto Cervo, a place we love coming back to.”

As regards the Southern Wind Trophy, the SW105 Kiboko Tres today led the SW82 Grande Orazio and the SW-RP 90 custom All Smoke. The provisional classification for the Trophy after two races sees a very even situation, with Kiboko Tres sharing the leadership with All Smoke and Grande Orazio. Jim Schmicker, vice president of Farr Yacht Design, who sailed on the SW105 Kiboko Tres said: “The boat is spectacular and always fast. The fleet start was very interesting, we are all professionals here, we know how to do a start and avoid potentially risky situations.”

A rest day is scheduled for tomorrow for the Loro Piana Superyacht Regatta, while the yachts from the Southern Wind shipyard will compete for their dedicated trophy with a fresh westerly wind forecast. The first warning signal is scheduled for 11.30 a.m.