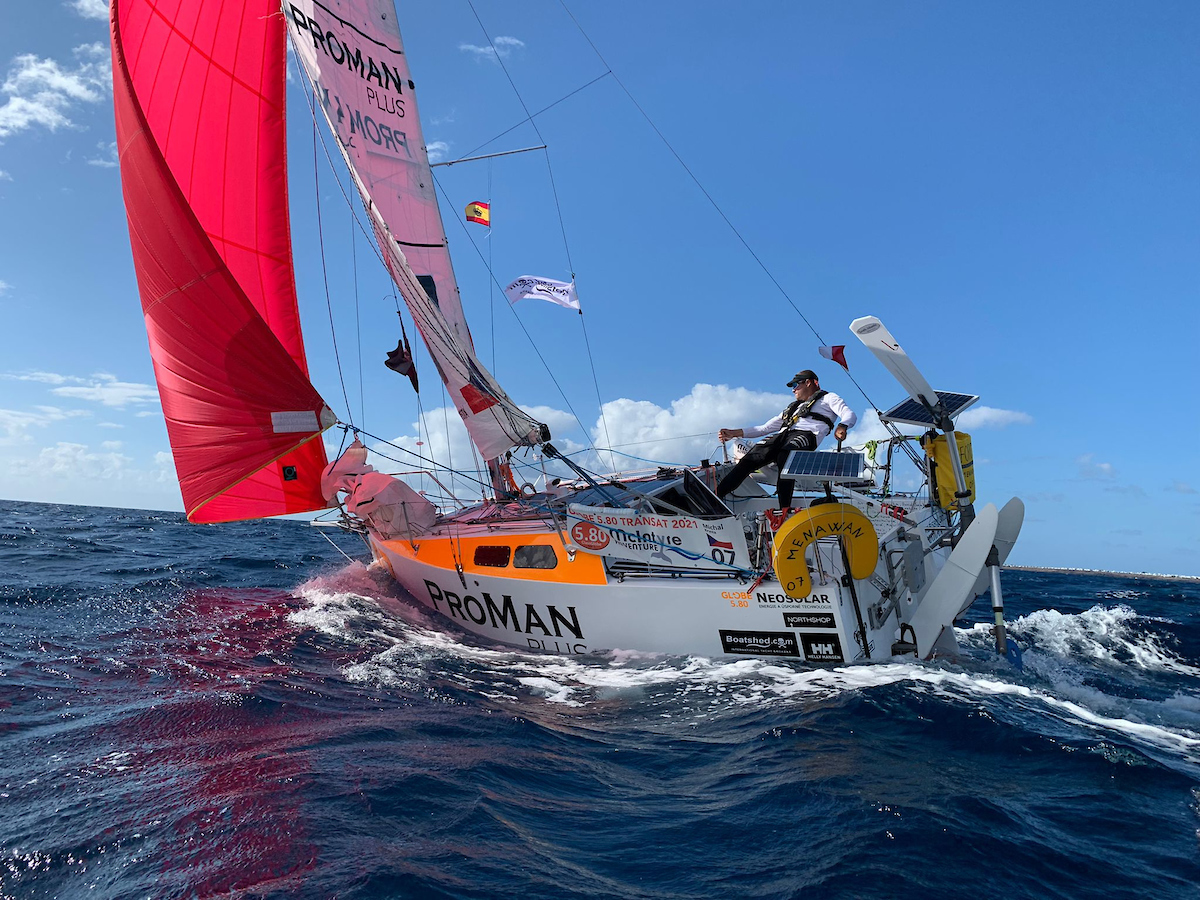 A group of four Spanish boat builders planned a trip to Lanzarote to surprise the Globe 5.80 Transat entrants before their Atlantic crossing, only to find out the start was moved forward before their landing time!

The spirit of the 5.80 family runs deep and delayed starts to meet fellow builders and sailors, now part of the race history, may well become a tradition.

The Leg 1 late starters, Jim Schofield and class founder Don McIntyre did not dilly dally this time, crossing the start line in first and second position right on the gun, leaving the youngster in their wake. Michal unusually under-canvassed, Peter full-on with the A5 up, and Etienne closing the line in relaxed mode.

Immediately after the start, the 5.80 fleet divided in two decisive options on both side of Fuerteventura Island, with Michal and Etienne – the leaders of the first leg – sailing the shorter course west of Fuerteventura, while Jim, Don and Peter chose the east side of the island to towards stronger winds along the West coast of Africa.

Today, November 19 local time, looks like the western option paid off with Etienne and Michal sneaking in the lead of the fleet once again, but with the wind dying slowly this is far from over and could well drag on until the skippers catch the trade winds further south.

In any case, time is not an issue for the Globe Transat fleet as the 5.80 sailors packed food, books and music for over a month, relishing the perspect of being alone at sea for a long while. As Class founder Don McIntyre said before the start: “the Globe 5.80 has the best price/fun/time on the water ratio of any ocean racing class.”

Severin Hummer will bring his race-ready 5.80 #98 on display on the McIntyre Adventure stand in Boot Dusseldorf. The 25-year-old, hailing from Switzerland decided not to participate in the 3000-mile leg after successfully completing the 600-mile qualifier, and will trailer his Shrimp back to continental Europe before taking her to Dusseldorf for the boat show from January 22 to 30.

Follow the race, on the Yellow Brick tracker https://yb.tl/globetransat2021# updating positions every 4 hours