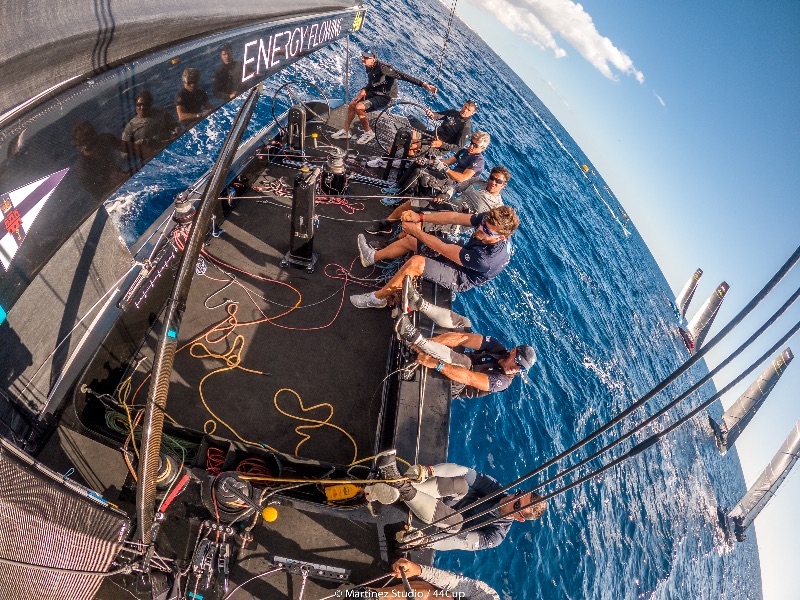 Conditions off Lanzarote’s moon scape south coast took on a different character for day two of the 44Cup Calero Marinas Lanzarote, with much improved sailing conditions albeit with the 8-12 knot wind blowing either along or off the shore.

To make up the schedule, four races were planned at the beginning of the day and four races were delivered. This was made hard as the wind veered through 90 degrees over the course of the afternoon.

That four races could be held was at least in part thanks to the 44Cup’s recently adopted use of MarkSetBots, remote controlled robot sailing marks that, when required – as they were repeatedly today – can speed across the seas to realign the course and keep it fair.

For most, the day was one of mixed fortunes, none more so than Pavel Kuznetsov’s Atom Tavatuy on which Evgeny Neugodnikov calls tactics. In today’s first race the Russian team nailed the right, Lanzarote side of the first beat, which proved a winning move. The Russian team went on also to claim today’s third race but punctuated their otherwise excellent day with seventh and eighth placed finishes.

“It was a tough day,” Neugodnikov explained. “We had a great start to the day. In the first race, we expected the right shift and there was more pressure also. It started at 205 degrees and shifted to 225. I am not happy with our fourth race because we were fifth or sixth, but we made a mistake and missed the layline which left us last at the top mark and at the bottom gate.

This was similarly the case for Igor Lah’s CEEREF powered by Hrastnik 1860 which, after a long fight with Chris Bake’s Team Aqua, came home first in today’s second race. On a roll, the Slovenian team followed this with a second in the third race only to bookend these with an eighth and a seventh.

“It was a mixed day,” admitted Lah. “We missed one shift in the last race. We are trying to climb up. We were surprised to see we are still third. Lanzarote is brilliant – it is warm with nice conditions. We expected more wind, but we will play with what we have got.”

44Cup newbie and sole female helm, Valeriya Kovalenko on Arttube, sailing only her second event in the 44Cup, continues to punch above her weight with her crew, many of whom once competed aboard RUS7. Incredibly, at this half way stage of the 44Cup Calero Marinas Lanzarote, Artube lies mid-leaderboard, in fifth place overall, ahead of several very much more experienced teams.

However, for a second day, the stand-out performance was that of Team Aleph, on which highly experienced Italian owner-driver Alessandro Rombelli is standing in for Hugues Lepic. Scoring a 2-4-4 in today’s first three races they were already top scorer of the day, but they then sealed the deal with a bullet in the final race.

“He has been driving very well and also the guys have been trimming the sails – all the crew work was flawless,” said Team Aleph tactician Michele Ivaldi. Of today’s racing, Ivaldi added: “We managed to always start in a good position where we could play the first shift and if you are in phase everything gets easier.”

Team Aleph now holds a useful four-point lead over Team Aqua going into the weekend. Chris Bake’s World Champions in turn are six in front of CEEREF – a key situation as Igor Lah’s team represents their main threat for the overall 44Cup title for 2021.

As Lah puts it, in this fleet “anything can happen. Everything is so close that if you make one mistake then you are behind. But that works in both directions!”

Racing continues tomorrow with a first warning signal at 1200 GMT. The forecast suggests the wind will be lighter than today and once again onshore like Thursday