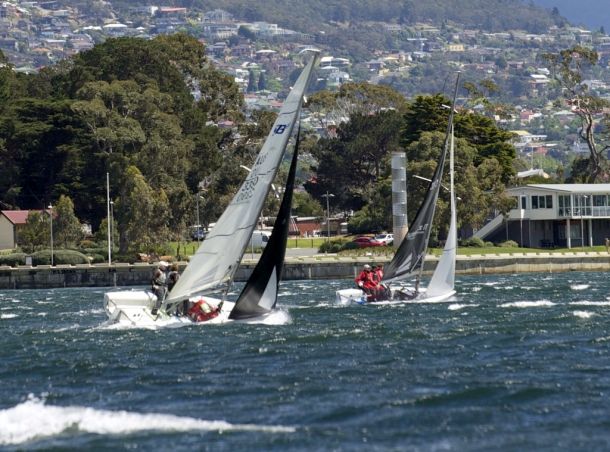 Bourke is based at Hamilton Island but is helming the Victorian entry Red with Rob Jeffries and Jake Lilley as his crew. In a heavy wind series over two day, Red won the States with two wins and a second.

Saturday’s racing in the SB20 championship will be seen on television world wide by millions of cricket fans, thanks to the World Cup match being played at Bellerive Oval on the eastern shores of the sweeping River Derwent.

Cricket Tasmania has asked the Derwent Sailing Squadron to set the windward/leeward race course within view of the cricket cameras to show a proactive River Derwent when the cameras from time to time taken in the background of the river, the city of Hobart and Mount Wellington (possibly even capped with snow following last night’s blizzard).

A fleet of 26 SB20s has entered the Nationals, the biggest one-design yacht racing fleet seen on the Derwent in years and potentially creating international interest in Hobart hosting the World championship over 2017 or 2018.

The local fleet now totals 24 boats, the largest in any Australian State, with strong fleets racing each week on the Derwent. Crews have moved from other classes such as Dragons, J24s and Farr 40 to enjoy the spectacular one-design racing offered by the Tony Castro-designed SB20 class.

Skippers and crews competing in the Nationals include both men and women and at least two crews of prominent Tasmanian teenage sailors.