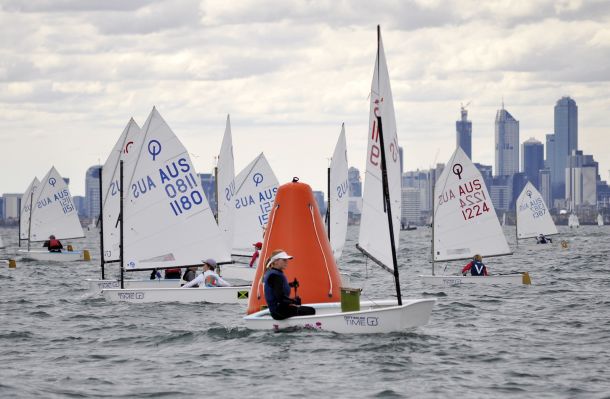 The first day of the 2015 Victorian Optimist Championships was an overcast day with a south-westerly of about ten knots that softened, backed and became more variable as the afternoon progressed. At the same time Port Phillip was quite choppy, providing challenging conditions for the less experienced sailors.

Three races were completed in the Intermediate and Green Fleets, while the Open Fleet only managed to complete two races today. Open will most likely sail four races tomorrow to catch up to the other fleets.

New South Wales sailor, Daniel Links from Royal Prince Alfred Yacht Club, finished third in the first two races today and then won the final race to finish at the top of the table in the Intermediate Fleet. Zac Heyes (MMYC) kicked of his regatta with a win and backed it up with a second place in race two, but slipped down the fleet in the third race to finish the day second overall. James Jackson (MYC) is third on the table, scoring 9-4-2 this afternoon.

Millie Harvey from Mornington Yacht Club made a clean sweep of the Green Fleet races today. She has already built a five point buffer from William Ross (BRYC/RBYC) who scored two thirds and a second. Another six points behind is Lara Johnson (AWYC) in third overall.

“Altogether it was a good day on the water, but a trying day for the race management teams and a testing day for many of our sailors”, said VIODA Technical Delegate Matt Ross after racing this afternoon. “There are some skilled New South Wales sailors showing our sailors how it’s done, and today the lesson was consistency.

“The main thing is the kids are having fun and part of that is the onshore activities like the Opti Muster and the after race sausage sizzle. The regatta is off to a good start and we just hope for some better breeze over the next couple of days”, he concluded.