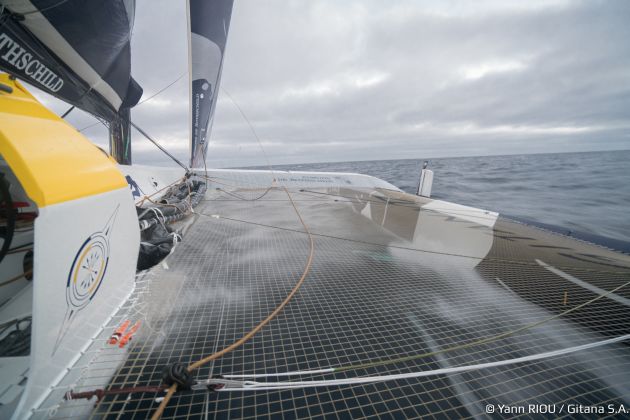 Leaders since Sunday and the initial hours of racing in this Transat Jacques Vabre, Sébastien Josse and Thomas Rouxel have lost the top spot to the Coville – Nélias duo. Such a transfer of power can best be explained by the poor positioning of the men of Gitana Team on rounding the Azores, and not a technical issue or damage, as certain observers might have imagined.

However things play out, after over three days at sea dominated by the Maxi Edmond de Rothschild and still with some 2,163.7 miles to go to Salvador de Bahia, it’s game on again at the head of the race. At the 19:00 UTC ranking, the latest addition to the Gitana fleet was positioned some 42.0 miles astern of Sodebo Ultim. The Edmond de Rothschild duo has gone from the hunted to the hunter; a position which inevitably inspires intrigue in the run-up to the negotiation of the famous Doldrums.

A tale of sails and positioning

Without wishing to make excuses, a somewhat alien philosophy for the team, Sébastien Josse provides us with a simple explanation for this handing over of power and the miles conceded to his rivals last night: “Thomas and Jean-Luc played a blinder in terms of the weather, which explains why they are heading the race today. After passing the Azores, we could choose between gybing several times or switching over to the J0 (large gennaker). Given our position at the time, we opted for a series of gybes and sailed under J1 (genoa), which ought to have enabled us to make gains longitudinally.

“Sodebo made the opposite choice, positioning itself over to the west in order to slip along. Our choice hasn’t paid off, quite the reverse in fact. Not only did the sea state on Tuesday night through into Wednesday prevent us from utilising our chosen sail, but our chance encounter with a windless squall further hammered the point home. In the end, Thomas and Jean-Luc pulled off the right move and given the weather conditions shaping up ahead of our bows, yesterday evening we had to gybe at 90° to the route to distance ourselves from the African coast and the zones of light airs forecast to our south.”

After repositioning themselves accordingly, the upshot of these shenanigans has proven rather costly: from 64 miles in credit at 21:00 hours, Gitana 17 had conceded 60 miles by daybreak.

“It’s always a tough decision, but the evening’s grib files were very clear. Sometimes you have to suffer a few losses in order not to end up mortgaged to the hilt by the next sequence of events,” admitted the skipper of the Maxi Edmond de Rothschild.

Trade wind ruffle
In the meteorology manuals, it’s explained that once past the southern limit of the Azores High, the southern expressway opens out before you thanks to a strong NE’ly breeze referred to as the trade winds of the northern hemisphere. This is the usual scenario when all the systems in the North Atlantic are lined up where they should be. This year, an African low pressure system is developing to the north of the Canaries, stirring things up in the trade wind system and hence the route adopted by those leading the way to the equator in this Transat Jacques Vabre. Antoine Koch, who is sharing the weather routing for the Maxi Edmond de Rothschild explained the phenomenon to us in more detail: “The zone of high pressure was perfectly lined up and we had a boisterous but fairly classic start to the race. On the other hand, for several days now, we’ve been watching a low pressure system forming offshore of Mauritania. The latter is developing as we speak, and this is what’s created a compression of the isobars between the African continent and the Azores, which has caused the strong winds and chaotic seas endured by Gitana 17. In the coming hours, it will generate light winds to the south of the top duo and to avoid this zone as much as possible, the positioning is crucial so it was important to reposition ourselves to the west at any cost to avoid being caught up in the throes of this system.”

A much awaited mano a mano
Sailors like nothing better than close-contact racing and a steely-edged crossing of tacks. In the Ultime category, for the time being the race has turned into a duel between the Maxi Edmond de Rothschild and Sodebo Ultim’. Indeed, since the technical glitches suffered on Monday evening aboard Prince de Bretagne, Lionel Lemonchois and Bernard Stamm have unfortunately been relegated to over 600 miles astern of them. Sébastien Josse and Thomas Rouxel won the first round but Thomas Coville and Jean-Luc Nélias have just set the record straight. The third round promises to be thrilling, especially as they have the dreaded Doldrums in their line of sights. The latter is scheduled for the start of the weekend.