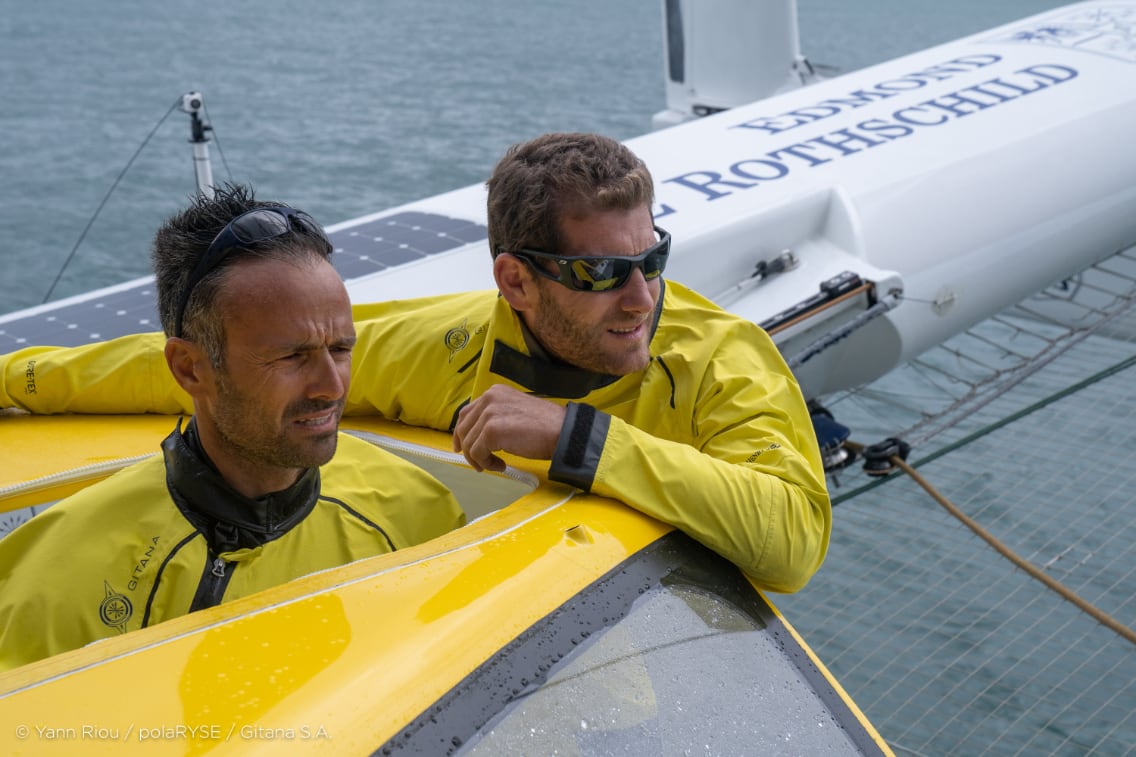 Four months ago, Charles Caudrelier and Franck Cammas joined Gitana Team and took over the helm of the Maxi Edmond de Rothschild to form a rather atypical if complementary duo. In late May, the 32-metre giant returned to the water after what equated to over six months in refit after she suffered severe damage in the Route du Rhum.

Since that time, the skippers and members of Gitana Team have really been pulling out all the stops in terms of work rate and time out on the water so as to give themselves every possible chance of success in the major autumnal Maxi clash, the Brest Atlantiques.

With the first part of the year taken up with the ArMen Race, the Rolex Fastnet Race and a qualification course of over 2,000 miles, culminating with an express 3-week refit, downtime is not part of the five-arrow team’s vocabulary.

“We’ve done a lot of sailing since the relaunch in late May, which was a must of course with the arrival of our new duo. It was also important for the team to get back into the saddle so as to finally turn the page on the Route du Rhum. The winter refit was an opportunity to repair the bow section as well as carry out some work to optimise the boat and make her reliable, which we’re wholly satisfied with,” explains Cyril Dardashti.

“The programme we set ourselves in May has been fully adhered to. Franck and Charles have managed to quickly get a feel for the Maxi. They have a real thirst for sailing the boat, understanding everything about her and transmitting their knowledge, which is incredibly rewarding. There is a constant exchange between the sailors and the shore team and it’s this osmosis, which today enables us to progress as a team and break new ground in offshore sailing. This notion of innovation remains one of the cornerstones of the Maxi project and the team in general,” explains the Gitana manager.

“The victory in the Rolex Fastnet Race has naturally been a great source of satisfaction for every one of us. There’s still a lot to do though between now and 3 November and we mustn’t rest on our laurels. However, we’ve passed an important milestone both on shore and at sea and we’re progressing in a very positive way.”

This sentiment is something Franck Cammas supports wholeheartedly: “The schedule’s been full-on but carried out to perfection! Our great success in the Rolex Fastnet Race is the crowning achievement of this group effort. It’s good for our confidence and that of the team.”

On 29 May 2019, the Cammas – Caudrelier pairing had their very first insight into what it’s like to sail the Maxi Edmond de Rothschild during a technical recce offshore of Lorient. The very next day, the latest addition to the Gitana fleet took the start of the Armen Race. That gave onlookers a very clear idea of exactly what tone and pace the new skippers of Edmond de Rothschild wanted to set.

In the first few weeks, the focus was on the crew: “That’s how Franck likes to do things. Sailing in crewed configuration enables a faster technical apprenticeship, as you really push the machine and the sailing programme perfectly lent itself to that. This initial discovery phase, culminating with the Fastnet, involved a steep learning curve and I think we managed to get the very best out of it, despite the relatively tight timeframe. The team’s involvement and know-how have been a great asset. The qualifier was the ideal way for us to get our bearings in double-handed configuration. It’s a demanding format, perhaps even more so than racing solo in fact, because you’re always flat out when there’s two of you. In that regard, our race at the end of this year is a major challenge! However, I really feel good with this boat. She’s very seaworthy and safe,” admits Charles Caudrelier.

Following on from the victory in the legendary Rolex Fastnet Race, spiced up by a top-flight duel and a finish that went right to the wire against François Gabart and his men, there was still no time for a holiday. Indeed, making the most of the optimum conditions to get in some offshore sailing, Charles Caudrelier and Franck Cammas made the switch to double-handed configuration (triple if you take into account their media man Yann Riou*) to complete their qualifier for the Brest Atlantiques.

Franck Cammas gives us the low-down on their route which spanned over two thousand miles: “It was our first time out on the boat double-handed and we enjoyed a superb qualifier with varied conditions, albeit without any really strong breeze (no more than 25 knots).

“We were lucky enough to find a weather window with a lot of downwind conditions, particularly along the entire coast of Portugal, then again on the return leg where we hunted down a low pressure system to the south of Ireland to set a course due East back to Brittany ahead of a front. Those two series of high-speed downwind conditions were another great opportunity to learn. They involved two-way manœuvres, trimming of the appendages and adjusting of the autopilot, which we still need to do a lot of work on, and of course some long sprints at over 40 knots.

“This will be a key factor in the outcome of the Brest Atlantiques: maintaining high speeds under autopilot whilst remaining calm, confident and rested… Physically, it’s inevitably longer with just the two of us, but the boat handling is completely manageable and actually I’m pleasantly surprised by the manoeuvring time and the performance we managed to post.

“The Brest Atlantiques is a long-distance race; a half-circumnavigation of the globe stretching nearly 14,000 miles. We’re going to have to get into a good rhythm so as we don’t overcook it and avoid damaging the boat. We’re going to need to remain as clear-headed as possible because, as is often the case on boats and in offshore races, it’s the soundness of the decisions which get results.”

* In the Brest Atlantiques, Yann Riou will be aboard the Maxi Edmond de Rothschild with Franck Cammas and Charles Caudrelier, in his role as media man. A photographer, cameraman and extraordinary drone pilot, Yann will be tasked with providing us with all the daily race news about the men of Gitana 17. The race rules prohibit him from assisting with the performance.

Yesterday afternoon, Gitana 17 headed back to her technical base. Over the next three weeks, the 32-metre giant will undergo a general check-up as Charles Caudrelier explained: “We’ve done a lot of sailing since late May and it’s really good to be able to give the Maxi a general check-up before we hit the racetrack again for 14,000 miles. The team will dismantle and inspect every element so we can set sail again in tip-top condition from mid-September. For Franck and I these few weeks will also be an opportunity for us to have a short break from the open ocean before we enter the home straight and the race start in Brest on 3 November.”

The members of the five-arrow team will also make the most of the occasion to make a few new improvements to the Maxi Edmond de Rothschild, changes that are unlikely to go unnoticed!

“We’re going in for a quick summer refit to further enhance the boat’s performance. Though we’re very pleased with her today, we can’t afford to slacken off because the competition’s knocking on the door! This refit will enable us to implement some new improvements, including one fairly significant one that we’ve had in mind since the start of the project, which Franck and Charles were immediately fully behind”, concludes Cyril Dardashti.

The Maxi Edmond de Rothschild is scheduled to be relaunched on Monday 16 September.