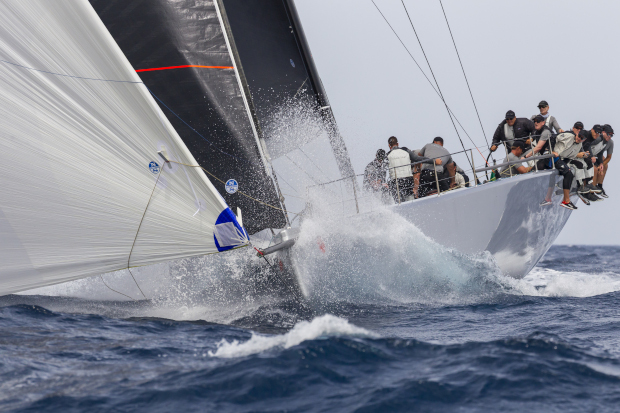 A third place on the water yesterday for Alex Schaerer’s Maxi 72 Caol Ila R was enough for the Swiss team to clinch the offshore race of the Rolex Giraglia under IRC corrected time by more than an hour from Sir Peter Ogden’s Jethou.

While there was a wait for the smaller contenders to finish before this result was confirmed, the windy conditions in this Rolex Giraglia – organised by Yacht Club Italiano, Yacht Club de Monaco and Société Nautique de Saint-Tropez and supported by the International Maxi Association (IMA) – ultimately favoured the larger boats with Sir Lindsay Owen-Jones' Wallycento Magic Carpet 3 finishing fourth and George David’s Rambler 88 ninth under IRC.

Victory in the Rolex Giraglia’s offshore came after a long wait for Caol Ila R’s Alex Schaerer: “I have done it more than 10 times, but this was premier today,” he said upon arriving.”

Schaerer added that while he twice sailed windy Giraglias with his Baltic 50, this was the first on his Maxi 72. “It was fun, but early on we were making more water than we could bail out. It was getting more and more like a submarine,” he continued. At this point the wind was regularly blowing 28-29 knots.

Caol Ila R won their race against Jethou when the British maxi blew up their A4 spinnaker. Unlike Rambler 88, they didn’t park for an hour approaching the finish, thanks to the shrewd navigation of Will Oxley. “We never stopped – it was much more of a business class arrival,” joked Schaerer.

In past races Schaerer has been pipped at the post by Shockwave, Momo and by Robertissima. As his boat captain John Hildebrand observed: “It is nice for Alex because he has been battling this race for a long time. It has always been a struggle, but he keeps coming back because he loves it.”

For his efforts this year Schaerer receives a Rolex Yacht Master watch as a prize as well as the IMA prize for the highest scoring IMA member in the offshore race.

Fifth on IRC corrected time was the Marten 72 Aragon of Dutch owners Andreas Verder and Arco Van Nieuwland. While they don’t quite have Schaerer’s lengthy association with the race, they have still done four before, including the windy one in 2012. “This race was the best ever,” said Verder.

“It was exciting in 2012, but this was better – a little more controlled. Coming in here was one big fetch, which is why we finished so early.”

Sailing with a largely Dutch crew, but also including leading French navigator Olivier Douillard, they had an incredibly swift leg towards the Giraglia Rock, during which time they touched 27.5 knots.

11th in the offshore race was Miguel Galuccio's Nauta 84 Vera, winner of the recent 151 Miglia-Trofeo Cetilar and one of the lead contenders in the IMA’s 2018-19 Mediterranean Maxi Offshore Challenge.

Calling the shots on board Vera is Dutch Volvo Ocean Race legend Bouwe Bekking, who said they had done well, especially by gybing early on the downwind leg to Giraglia. But then, just off Monaco, “we parked up and we could see the boats coming in and they just sailed straight through. It is a shame because we sailed a really nice race,” said Bekking.

13th under IRC was Hungarian Marton Jozsa’s Reichel/Pugh 60 Wild Joe, her crew including multiple Volvo Ocean Race winner Stu Bannatyne. On the downwind leg towards Giraglia they had had a blast.

“We were really happy. We were checking the tracker and making 26-27 knots with the DSS foil – similar speeds to the 72s,” recounted Jozsa.

Then disaster struck. “At about 4pm the masthead lock broke while we were sailing under masthead Code 0. It fell in the water and went around the keel and the foil and it took one hour to get it out. It was a very big fight.”

The most comfortable race was certainly had by navigator Hugh Agnew and the rest of the crew on the Andre Hoek-designed ketch Marie, which at 180ft is the longest boat ever to have competed in the Rolex Giraglia.

“We had a nice pin end start – I think our bow might have been first across!” said Agnew. While they were lacking a spinnaker, highlights of Marie’s race were getting their 300 ton yacht up to 17 knots on the reach back from the Cavalaire turning mark and rounding the Giraglia Rock at 01:30 under a full moon.

“All the guests were up on deck – they had a wonderful time,” he said. However they parked up severely off Monaco yesterday afternoon resulting in their 96th place under IRC.

“This was my ninth Giraglia and definitely the fastest one – we passed the Giraglia at 00:30 and we beat our boat speed record!” said de Froidmont. On the leg to the Giraglia rock, Wallyño had reached 27 knots in 30 knots of wind. And unlike the experience of the frontrunners, her downwind sleigh ride was even relatively dry.

In his position as President of the International Maxi Association, de Froidmont added: “This 67th Giraglia was the best of the last 10 years. Even if we weren't able to race as many inshores as we'd hoped, the offshore was exceptional, with amazing conditions which enabled all of the maxis to beat their own records.

“I would like to congratulate all IMA members who participated, and I'm proud that our members filled most of the podium positions.

“On behalf of myself as a competitor and the IMA I would like to thank the organisers and Rolex for the great opportunity they offer us to compete in such races. We look forward to seeing you again next year.”

The offshore race of the Rolex Giraglia was the penultimate event in the IMA’s 2018-19 Mediterranean Maxi Offshore Challenge which concludes with the Palermo-Montecarlo starting on 21st August.

Full results and all information: https://www.rolexgiraglia.com