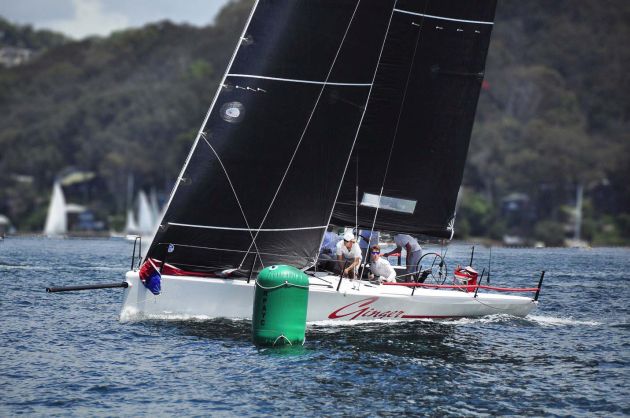 The comeback king and kid climbed back from an almost insurmountable five point deficit yesterday to deliver Ginger a trifecta of Australian Championship titles, decided on the finish order in the last race.

Leslie Green, Ginger’s owner/driver, is this evening the king of the comebacks and, once again the MC38 class. His young tactician David Chapman is the kid who helped engineer a remarkable fightback thanks to today’s two wins. The rest was decided by how the cards fell in a patchy race 10.

In front of a chasing spectator fleet on Pittwater, Ginger, Howard Spencer’s Menace and John Bacon’s Dark Star wrapped up their title pointscore first, second and third overall respectively, each on 31 points, the epitome of one design racing.

Menace’s win and Dark Star surrendering its commanding fleet lead chasing a vaporising breeze, then finishing behind Ginger in sixth place completely rearranged the top order.  Ginger went from second to first, Menace went from fourth to second and cruelly Dark Star went from being on the verge of a second national title to third.

“I’ve got the most fabulous crew,” Green told the Royal Prince Alfred Yacht Club crowd and MC38 crews, enjoying Harken’s end of regatta feast, having accepted McConaghy’s perpetual Australian Championship trophy. “This is our third time and I have a debt of gratitude to all the boys on our boat.

Like Ginger’s crewman with the broken finger from an on board accident in Friday’s heavy air, Chapman said he felt “mentally fractured” by their comeback. “We tried to stay in phase as much as we could; sometimes we were behind the eight ball. The great thing about asymmetric boats is when you are back in the train you decide when to go, you pick your moment.”

From five MC38 Australian Championships, Chapman has been on four winners, beating Ginger from on board Voodoo Chile four years ago. “We shanghaied him after that,” joked a proud Green.

Second overall Australian champion Menace (NZL) scratched out a mixed series, tactician Will Tiller suggesting, “We sailed like a pack of dogs from race 2; it was unbelievable we were in with a chance to win, nothing went our way. We practiced our tacks between race 9 and 10 and found that extra 10%. It was great to see Leslie get it again, he’s a very popular winner.”

The crowd momentum was with Dark Star in race 10, and then they watched the fleet slowly close the gap and Bacon and his crew split off from the fleet to follow Menace. It turned out Menace carried a private breeze with them to the finish, leaving Dark Star out wide and alone.

“We had to beat Ginger and it couldn’t have gone worse for us,” Bacon recounted. “We followed Menace but didn’t get the puff he got. That’s the way it goes, that’s Pittwater in light air. We had opportunities all weekend, one better result in one race and we could have won. We are still wrapped to be up there on equal points with the winner.”

To his tactician Cam Miles and his RPAYC crew, the Australian MC38 class president paid tribute.

On a tricky final day, Sunday February 7, 2016, PRO Steve Merrington and his team managed to run four races in 6-10 knot swinging east to sou’east winds with plenty of course adjustments and even more holes on the track to fall into. “It was a race officer’s nightmare,” he offered. “We managed to run all but one of the scheduled races over three days and we watched superb racing. There wouldn’t be a fleet that can pull a spectator flotilla like the MC38s and the RPAYC is delighted to host the class again,” Merrington commented, scanning the packed clubhouse.

Next stop for the MC38s is Middle Harbour Yacht Club’s Sydney Harbour Regatta, March 5-6, where the fleet will race in its own division, then in April the class begins a three-part season championship pointscore.