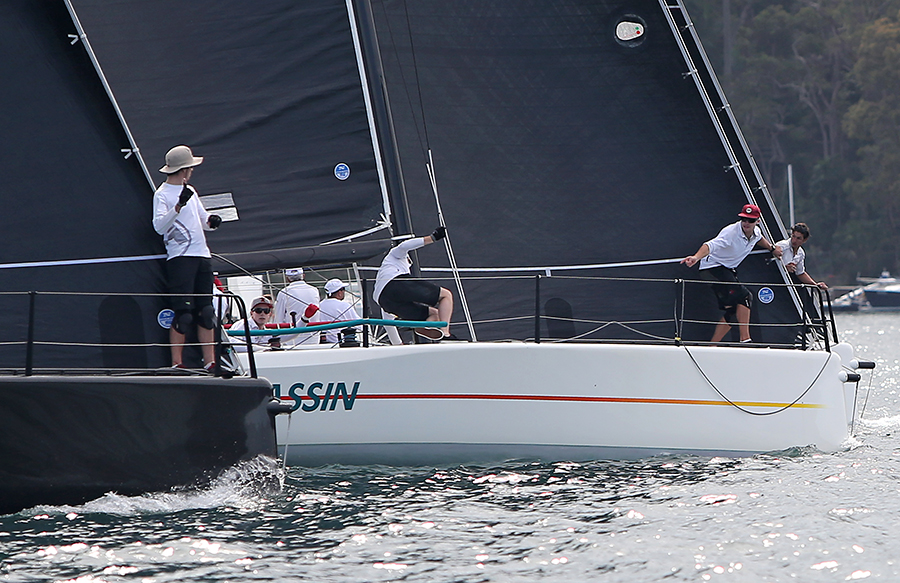 Bowmen lining up at the start. Photo Crosbie Lorimer.

Ginger took out the MC38 Spring Regatta on Pittwater by two points, earning skipper Leslie Green the highest honour and high praise from one of sailing’s greats.

“Leslie is a real inspiration, we don’t like losing to him but if we are going to come second then we’re glad it’s to him. He’s a fantastic sailor and to be competing at his age at this level of the sport is remarkable.” And so Ray Davies, tactician on Howard Spencer’s Menace and part of Team New Zealand’s next America’s Cup campaign paid tribute to the elder of the MC38 fleet before jetting out of Sydney this evening for the next America’s Cup World Series event in Bermuda.

Green has enjoyed a long association with sailing, starting out in ocean racing in the 1950s with the late and illustrious Jack Rooklyn. He switched from his comfortable Swan design to high-voltage one design racing in late 2012, built a winning team and is a two-time and current class Australian Champion, each time with David Chapman as tactician.

Always a gentleman, Green handed over credit for Ginger’s result on Pittwater over the seven-race weekend series entirely to his crew. “It’s because of our really good crew, they never stop trimming, and we are quick through the water. The rest is up to God. It’s a very calm boat with calm people….though we have our moments of course. I wouldn’t have it any other way on board, sailing is my hobby.”

Ginger, sailing for the Cruising Yacht Club of Australia, held a top three spot in every race. Menace had more wins but also two fourths – and that was the difference between the Aussies and the Kiwis from Royal Akarana Yacht Club when all the points were counted up.

“We had a great two days and out of the seven races we had six good ones,” Davies recounted. “That last race got a bit wobbly when the clouds came over and shut everything down, but that’s Pittwater. We’ve noticed the fleet has made a big jump since we last sailed together, with the standout being Assassin. The class has tightened up; it now comes down to the boat that sails best on the day.”

Third overall was John Bacon’s Dark Star (RPAYC) and fourth Marcus Blackmore’s Hooligan with guest skipper Chris Dawson and the RPAYC crew just seconds from victory in the final lucky dip passage race on Sunday October 11, 2015. Earlier the fleet made the most of steady 8-10 knot nor’easterlies and blue skies for their two final windward/leewards, race six being the highpoint in terms of the fleet compacting.

“We got the boat going as the weekend went on, we had a few guys in new positions, including me,” Dawson said back at the host Royal Prince Alfred Yacht Club this afternoon. “It was a challenging series and good fun. You never felt like you were completely out of it.”

Ginger was named the MC38 Spring Regatta North Sails Boat of the Day at the end of both days.

The class will take a break over Christmas, so many of the crew are free to take up positions in the major bluewater races to Hobart and Coffs Harbour, then reconvene in February for the 2016 MC38 Australian Championship title on Lake Macquarie.