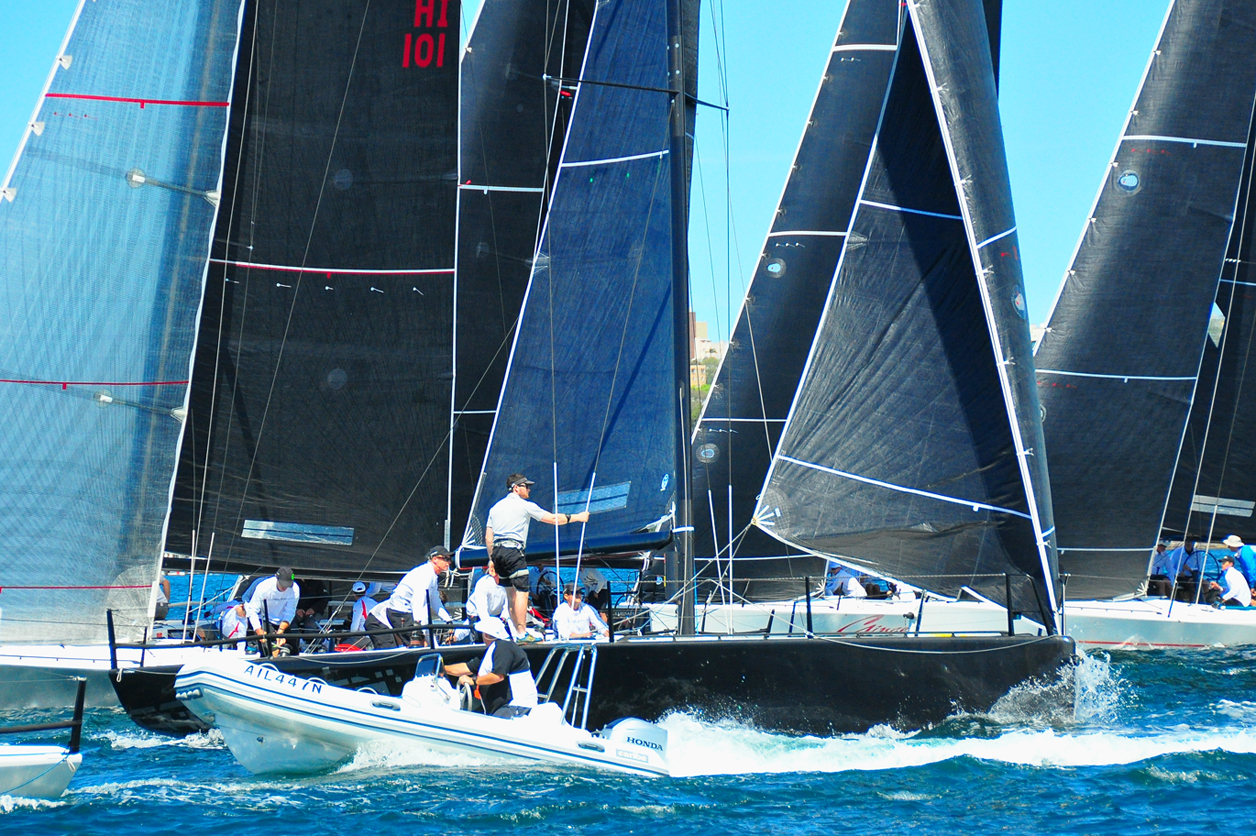 Eight MC38s took to Sydney Harbour in light winds on the magic opening day of the CYCA Spring Regatta. An hour and a half delay due to insufficient breeze eventually transitioned to an 8-9 knot easterly and consecutive starts were run off Garden Island’s naval base on the harbour’s southern shoreline.

Four races in to the seven-race series, Leslie Green’s Ginger already has a seven point advantage, their 2,1,1,2 scores easily giving them top billing and the North Sails ‘boat of the day’ battle flag.

Neville Crichton’s Maserati is running second and John Bacon’s Dark Star third, and both will carry costly 7 and 9 point results respectively, given the Spring Regatta is a no discard pointscore.

The fleet was jolted from the suspended start of the spring racing program when a different Sydney yacht club laid marks in the same vicinity as the MC38’s bottom gate, causing confusion in race one.

The three leading boats, Dark Star, Menace and Assassin, unknowingly sailed an incorrect course and were later scored DNF. Others realised the leaders’ error and were able to adjust in time. Two of the three penalised with a DNF applied for redress back at the dock but were denied by the jury.

Ginger’s mainsail and spinnaker trimmer, Richie Allanson, said they came close to sailing the wrong course and getting smacked when tactician David Chapman recognised the error and corrected, giving them a few bonus points. “It was a hard day to string four good results together, tricky with the tide and the other traffic but a beautiful day on the harbour,” Allanson elaborated. “One of the great things about these boats is you can race them in eight knots.”

In the off-season Green had Ginger’s rigging renewed and the team went sailing on Wednesday, their first sail together in two months, to trial the new set-up.  “Leslie said going sailing during the week was the best thing that had happened to him the last eight weeks. When the owner is enthusiastic, he does a nice job driving his boat,” Allanson added.

Maserati and Ross Hennessy’s Ghost Rider’s scored a bullet apiece and all crews other than Ginger collected mixed results.

Dark Star had Katie Spithill on the helm representing Bacon, who was interstate but will be back for day two.  On her first-ever drive of an MC38 Spithill said, “It was really good fun. I’ve been in the tactical role but not the driving role – it’s a very different focus, making sure the boat’s going fast. I had zero practice, on the way to the start line was it. Stepping on with a competent crew makes it easy; it was like old times as I’ve sailed with a lot of the guys before. If I win Lotto I’ll buy an MC38 and join the fleet,” she added.

Spithill’s husband Grantley Pellew was also on board Dark Star, as a guest trimmer.

The Cruising Yacht Club of Australia’s Principal Race Officer Steve Kidson originally set up a course off Taronga Zoo, anticipating the forecast southerly. When an easterly breeze settled in Kidson’s team moved the operation and reset, starting with one mile upwind legs in race one then shortening to .85nm, to keep individual races within the class’ preferred timeframe.

West to north-westerly winds below 10 knots are anticipated to turn south-westerly on Sunday September 25 in the middle of the day then tend southerly 10-15 knots in the early afternoon.

Race five is scheduled to begin at 1000hrs and like Saturday it will be a matter of Kidson sticking his head out of the boat and setting up based on what’s actually happening on the track.