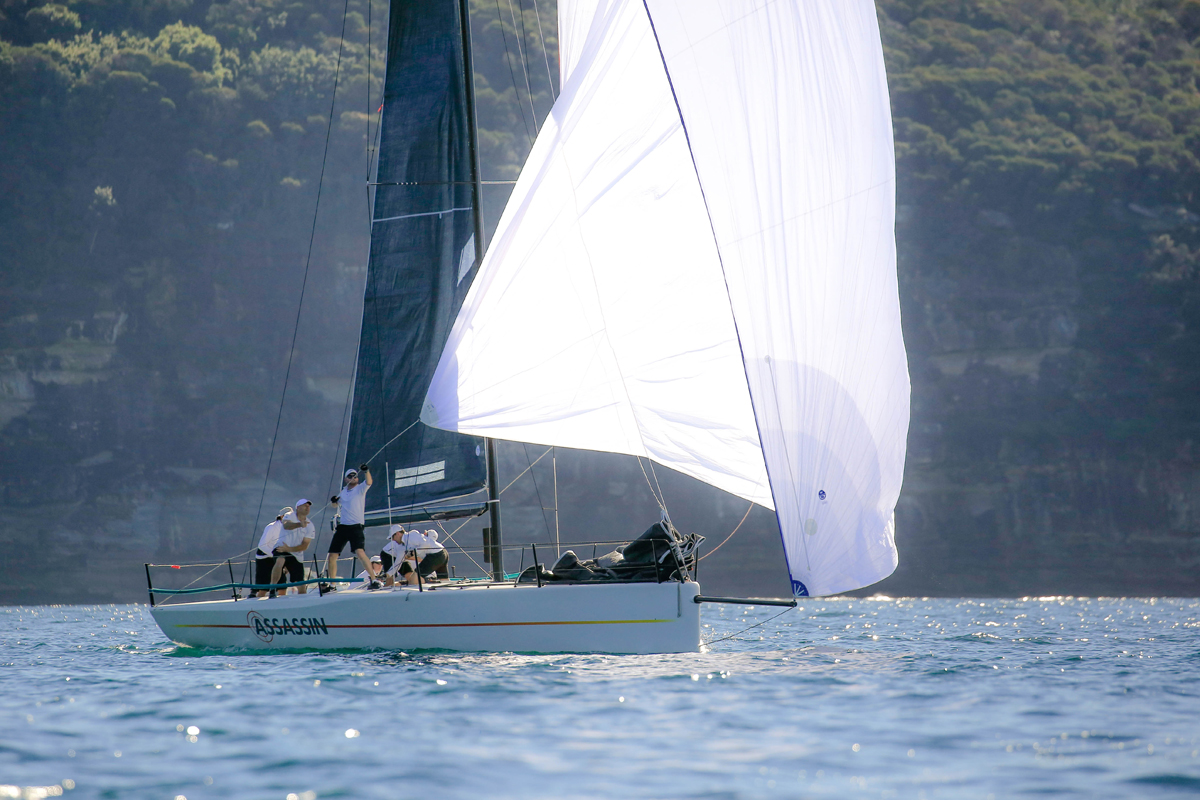 Assassin sits in third after day one. Photo Michael Chittenden.

Another Sydney humdinger produced dazzling sunshine, a top temperature of 27 degrees, flat seas and light winds starting in the west then dialling to the south and finally settling into a sea breeze more typical of summer.

Two bullets propelled Ginger (CYCA) to the top of the leaderboard, the ‘North Sails boat of the day’ sitting three points clear of Menace and five off Robin Crawford’s Assassin in third place.

“The fleet was the most open its been in quite a while and is that little bit better again, and in one-lappers like we had today there’s not much time to come back at the competition,” Ginger’s tactician David Chapman said . “Everyone was in the lead at some point and we came out ahead at the right times.”

Well known yachtsman Michael Coxon is supporting the Assassin team as tactician while regular Evan Walker fulfills match racing commitments. “It’s so close, we are only a point from last but a third on paper,” Coxon said. “For Robin it was a great day and he was upbeat about our last couple of good races to finish off. We are keeping it simple.”

Joe Turner reckons the scallywag component of Neville Crichton’s Maserati crew had the most fun in what was the new crew combination’s debut outing.  “We didn’t make one crew-work mistake or one error during a manoeuvre but we didn’t consolidate some of our gains. Probably I was trying to convert skiff strategy to yacht strategy; if anything it was good for me knowing what decisions pay off and what don’t,” suggested the new tactician as the latest MC38 outfit mulled over their opening appearance.

“I think it was a really positive day for us even though the points don’t show that. The other four boats are the best in the fleet. Our expectations were met and we had fun,” Turner added.

Middle Harbour Yacht Club’s Phil Yeomans PRO presided over three one-lap races, the first in an 8 knot westerly and the second starting in a southerly after an hour-long misadventure delay. The chief umpire, who shall remain nameless, throttled forward after the start gun ready to chase-down any rule-breakers, then embarrassingly his engine spluttered and went quiet.

Race two began in a southerly on a new track south of the Sow & Pigs reef only half way down the spinnaker run Yeomans had to pull the pin due to the arrival of the nor’easterly, as the day warmed. A new course was laid back in The Sound vicinity, between Middle, North and South Heads, and two more races went ahead without interruption in the steady 5-8 knot ENE breeze.

Tomorrow’s program, Sunday May 15, is due to start at 1100hrs with up to three races scheduled.

A couple of other Sydney clubs had fleets out today and tomorrow the MC38 fleet will be threading their way through the huge CYCA Winter Series fleet.

The MC38 Autumn Regatta is the second of a three-part Season Championship to be decided at the third and final event, the MC38 Winter Regatta in June.