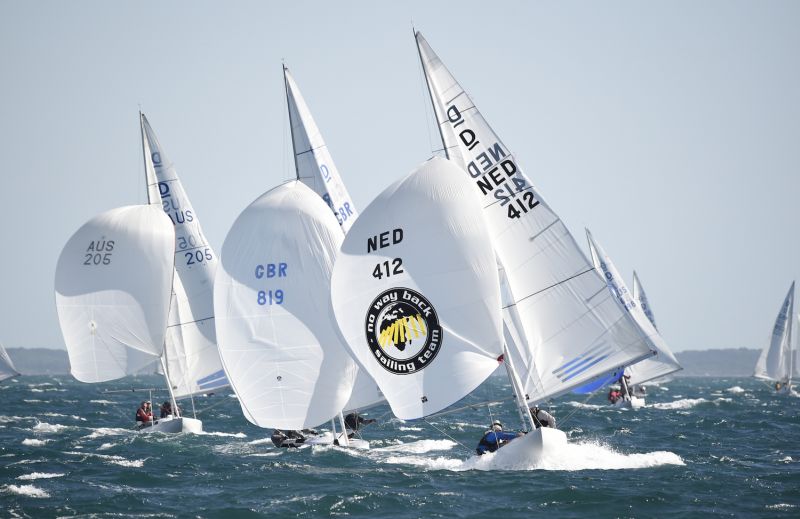 The 2019 Dragon World Championship has reached the half-way stage already after five races have been completed. Day three was another hot day on land with an air temperature in the high 30’s. On the water the race committee had to wait for a couple of hours for the sea breeze to fill. When it did it only really reached a maximum of 14 – 15 knots and then faded on the last leg of the first race of the day. The second race of the day became a fairly genteel affair with a light to moderate S/SW breeze ranging from 10 – 12 knots.

Race 4 took a couple of attempts as the breeze took a late swing in the final few seconds before the gun causing a crowded pin end start. On the third go under black flag the start was clear. Local Royal Freshwater Bay YC sailor Sandy Anderson sailing Blue Marlin with John Moncrieff, Harry Coulson ad Caroline Gibson got an absolute cracker at the pin. Most of the fleet were quite well spread across the length of the line. The majority headed out on starboard tack until they reached Fish Rocks and slammed on to port for the long tack out towards the top mark near Carnac Island.

After around 29 minutes of upwind work, Grand Gordon and Louise Racing turned first ahead of Peter Heerema and his crew sailing AAA. Charlotte ten Wolde and her Olinghi team were well placed in the top 5. The breeze fell a bit quiet on the run back to the gate and the course was reset for the following upwind leg. The fleet split and most appeared to over lay the lay-line to the new windward mark on the second lap.

In a change of order the Dutchies with Pedro Andrade calling the shots, took the lead closely followed by Yanmar Racing and Klaus Diederichs, Jamie Lea and Diego Negri in Fever. Just when you thought the Olinghi girls were about to take their first gun of the World Championship, Peter and son Sam Gilmour worked some magic soaking down to blanket the girls spinnaker and in a flurry of gybes slid  past them to windward to steal a valuable win. Klaus Diederichs finished another race in third, the current world champions had to settle for a fourth and Willy Packer back in the action in fifth.

PRO John (JT) Taylor had to swing the course due to a shift to the South but race 2 of the day and race 5 of the series got going at 1520hrs in a light to moderate 10 – 12 knot late afternoon sea-breeze. A close but clear start saw Provezza Dragon shoot the pin and RUS76 Rocknrolla at the committee boat end, clearly favouring a go on the right of the course.

There was a fair bit of separation stretched across the race track. Rounding first with a clear lead was Andy Beadsworth in Provezza Racing. Dmitry Samokhin in Rocknrolla followed by JPN 56, Yanmar Racing again in good shape.

By the bottom gate rounding Beadsworth and his Provezza crew had extended their lead to 40 seconds at the gate. The two British boats, Grant Gordon in Louise Racing and Klaus Diederichs where waiting to pounce on any mistakes ahead of them.

On the second lap the breeze flattered to deceive hiking up to 15 knots at one point only to fade again on the long runs back toward the Fremantle docks. Sailing course 1, the current world champions just had to sail a loose cover to the finish to claim their second bullet of the championship and move into a 6 point lead overall at the half way stage in the regatta.

As the next group of boats headed upwind to the finish there was a late flurry of tacking and port/starboard calls just meters from the finish. Peter Gilmour’s Yanmar Racing team just managed to cross 3 boats to take second to complete an excellent day for his team. Grand Gordon with Ruairidh Scott in the middle and Sophie Weguelin and James Williamson up front, nudged over the finish line in front of Dmitry Samokhin and his crew Andrey Kiriilyuk and Jasper Harding who raced a great race to finish fourth. Just squeezed out on the final tack was Peter Heerema and AAA.

In the Corinthian fleet, local boat Tatsu sailed by Andrew Foulkes, Andrew Bennett and Matthew Stafford enjoyed the lighter conditions, recording a 6th and a 10th to move up the leaderboard. As usual mid fleet was very congested with several boats finishing 4-5 boats abreast so many teams can have a snakes and ladders type race day. Another crew doing very well is Bertie sailed by Simon Barter and his crew James Barter and Donald Wilks from the UK. Simon chartered a well known Dragon called Route 66 which had spent nearly 10 years in a dusty shed near to her home club at the Royal Freshwater Bay YC. She had been lovingly restored and completely kitted out by local Dragon rigger and sailor John Hay. Simon and his crew have recorded very consistent results and sit 15th overall just behind many of the professional Dragon crews.

After a long day out in the heat of the day a pod of dolphins ushered some of the fleet back into Fremantle Harbour to round off another glorious day of racing on the Indian Ocean.

There were no retirements today and appeared to be no real breakages so the fleet will be ready to race another day with 2 more races scheduled for Monday with an earliest warning signal of 12 noon.

After racing Sam Gilmour gave a hint as to why his Yanmar Racing team had been on fire today.

“It had something to do with the Wagyu beef BBQ last night. It got us ready for today’s racing. We made a few changes to our settings and sails and it seemed to work for us today.”

On their late move to overtake NED 411 to take the gun in race 4, he claims he and skipper Peter Gilmour were discussing their tactics a while earlier on the run. They also stole second place in the second race of the day on their last tack for the line.

“It was really crucial for us because we gained some valuable points on the scoreboard.”

Yanmar Racing Team sit just one point behind Grand Gordon’s Louise Racing team in third overall. With a discard coming into play after the next race sailed the overall positions could be a little close for comfort.