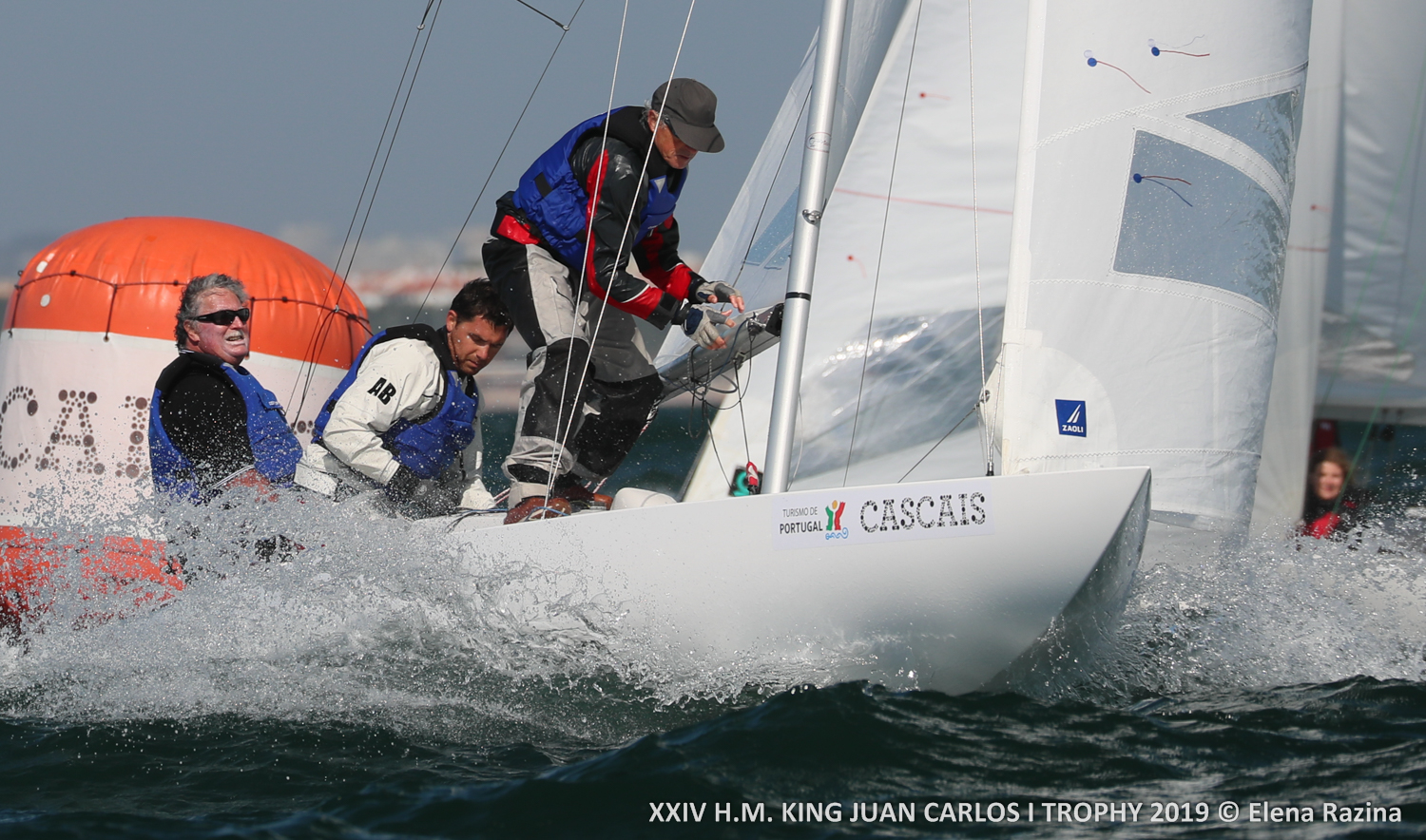 2 May 2019 – Cascais, Portugal – After the strong winds and drama of the opening day, day two of the Dragon HM King Juan Carlos Trophy, being hosted by the Clube Naval de Cascais from 1 to 4 May, brought a welcome change of pace with light to moderate breezes and plenty of hot sunshine. Races three and four of the eight race series, brought some surprise results and a significant shake up on the leader board.

Just prior to the start of racing all attention was on the recovery of Peter Gilmour's Team Yanmar JPN56 following her sinking after yesterday's race. Excellent work by the club staff, Pedro Andrade of 8th Dimension Racing and a professional dive team saw her rapidly recovered. Fortunately the boat had come off virtually unscathed and Gilmour has confirmed that they will be back with the fleet tomorrow.

Out on the race course Cascais continued to offer superbly challenging sailing for this top flight Dragon fleet, with lots of shifts and some tricky wave patterns to contend with.

On the starts the fleet struggled with current taking them over the line and it took three attempts to get each race underway. In race three the committee brought out the Uniform Flag and both Russia's Viktor Fogelson and Portugal's Pedro Mendes Leal had to take scoring penalties. In race four the committee went to Black Flag and four teams were disqualified, a move which was to have significant impact on the overall standings.

As always consistency is the key to success and Britain's Martin Payne, sailing with Ali Tezdiker and Antonio Matos, proved to be the most consistent performers of the day. A fourth in the opening race followed by a second in race four moved them nicely up the leader board from sixteenth to seventh.

Monaco's Jens Rathsack, crewed by Diogo Pereira and Frederico Melo also had a great day scoring a second and sixth. Scotland's Grant Gordon, sailing with Ruairidh Scott, James Williamson and Alex Warren took a third in race three and then a seventh, while Russia's Anatoly Loginov with Vadim Statsenko and Alexander Shalagin did the reverse with a seventh and then a third.

With overnight leader Gilmour temporarily out of the picture, Gordon jumps from fourth into the overall regatta lead by two points from Loginov who had come into the day in eleventh place, while Rathsack goes from seventh to third, a single point behind Loginov. Also scoring ten points for the day thanks to sixth and fourth places was Pedro Rebelo de Andrade, who remains in fifth overall by one point.

After racing Jens Rathsak spoke about how close the competition is: “Our third race was almost perfect. An easy start, we had good speed out of the start, we chose the correct side and ended up being second at the first mark. Normally it pays to go right here in Cascais, but today it was left so everything is changing. It was very close on the finishing line, we finished second tacking in just ahead of Grant Gordon. The fleet is closely matched, the points are very equal, so the championship overall is going to restart tomorrow and everything is still up for grabs.”

Switzerland's Hugo Stenbeck won race four and with a twelfth in race three now lies in fifth place overall, one point behind Andrade and one ahead of Dutchman Pieter Heerema, who had a tricky day with a sixteenth and eighth place which pushed him down from second to sixth place overall.

Top French offshore sailor Gery Trentesaux got his day off to a great start with a win by the narrowest of margins in race three, but then fell foul of the Black Flag in race four.

Also caught by the Black Flag was fellow Frenchman Stephane Baseden, who came into the day in sixth place and took fifth in race three, but now drops down into ninth overall, ten points behind the leader.

In the Corinthian Division for the all amateur teams Portugal's Miguel Magalhaes, crewed by Jorge Pinheiro de Melo and Jose Magalhaes has taken a four point lead over his fellow countryman Manual Rocha crewed by Jose Bello and Bernardo Torres Pego. The Belgian team of Guy Celis, Willie Hambrouck and Steven Vermier are third Corinthians at this mid point in the regatta.

After racing the crews came together to enjoy some of the Clube Naval de Cascais' legendary daily hospitality and bask in the warmth of the late afternoon breeze on the club's harbour view terrace.

Two further races are schedule for tomorrow with the start time revised from 11.00 to 13.00 to again allow for the anticipated early afternoon arrival of the sea breeze. The regatta continues until Saturday 4 May with a total of eight races programmed.