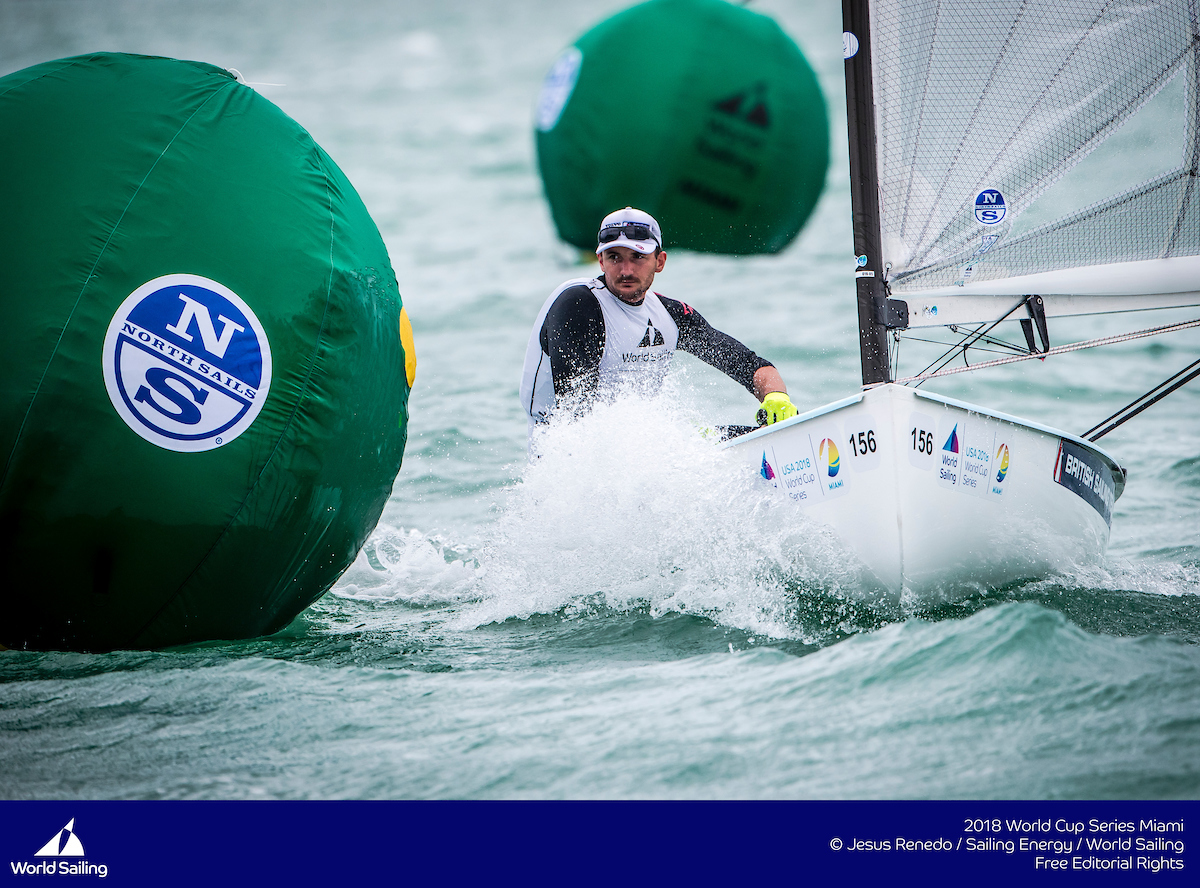 After a day off on Friday because of very strong winds, the Finn fleet at the World Cup Series in Miami returned to the water on Saturday with three more races held in some stiff 18-22 knots easterly winds.

It was looking like a battle between Giles Scott and second placed Alican Kaynar, from Turkey, was in the offing, but Kaynar struggled to find the form of recent days and was soon losing points to Scott who extended his lead after each race.

Scott won the day with a 3-1-1 to take an almost unbeatable 19-point lead into the Medal Race. Kaynar, in second, ended the day just three points ahead of USA’s Caleb Paine, the bronze medallist from Rio at his first event back on the circuit since 2016.

Scott’s teammate, Ben Cornish has had an inconsistent week so far, starting the day in 15th overall, but managed to put that behind him on Saturday with a win in the opening race of the day after rounding the top mark around tenth. Early leader, current world champion, Max Salminen, of Sweden, crossed second while Scott was third, to extend his lead at the top to four points.

Scott then took control of the next race on the second upwind having trailed Brazil’s 2013 world champion, Jorge Zarif, round the top mark and then Cornish, around the gate. Cornish hung onto second with the two Brits extending on the fleet by a sizeable margin. Croatia’s Josip Olujic recovered from a mast breakage on Thursday to pick up his best race so far with a third place finish. Kaynar finished 14th, to leave Scott with a 10 point advantage with one more race to sail.

Into the final race of the day and Paine was in front at the top. However, France’s Jonathan Lobert was in front by the gate, with Scott already up to third. The situation pretty much stayed that way until the final downwind, with Scott coming through for another win – and a hat-trick of race wins for British sailors – from Paine and Lobert.

After a great start to the day, Cornish had rounded near the back of the fleet and had a lot of work to do, especially with Lobert right at the front for the first time this week. For a while Lobert looked to heading for the medal race, but then Cornish starting moving through the fleet to finally cross in 11th, while Lobert dropped to third. Cornish just got the points he needed to beat Lobert by one point overall and sit in tenth overall, to take the final place in the medal race, while Lobert ended his regatta in 11th overall.

In terms of numbers on the scorecard, current European Champion, Lobert, looked like he had had a poor week. He explained, “I am not really focused on the result here as I am trying a new make of sails. I think it’s the best way to get to know the sail while using it in regatta. So far I am still in the learning process and the speed is not really good, for now but day after day I will figure out.”

“I just love my old sails but I think it was the good timing to try something new. I think putting yourself in trouble is a good way to learn new things and get better later on in the season. It’s a big change and most of the time I have had my head a bit too much in the boat and with these sailing conditions it’s not easy.”

Salminen ended the day in eighth overall, but too far adrift to get a medal. He spent some considerable time in Australia over the European winter, training and taking part in regattas in the ever expanding and enthusiastic fleet there.

“I got to try some different materials in Australia, but time will tell if I can convert that to some extra speed.”

On the coming season, leading up to the first Toyko 2020 qualification regatta, he said, “It is a congested season with many regattas, so I think it is very important to pace yourself and find the best lead up to Aarhus.”

While Scott just has to turn up on Sunday and finish the Medal Race to win gold, the battle for silver is between Kaynar, Paine and fourth placed Ioannis Mitakis, from Greece, the early regatta leader in Miami. Mitakis trails Kaynar by 16 points and Paine by 13, so he has some work to do. Also in contention for the bronze are Zarif and Anders Pedersen, from Norway, who both have to win the race to stand a chance.

The Finn Medal Race is scheduled to start on Sunday at 13.45pm local time. It will be tracked and streamed live through: https://wcs2018-miami.sapsailing.com